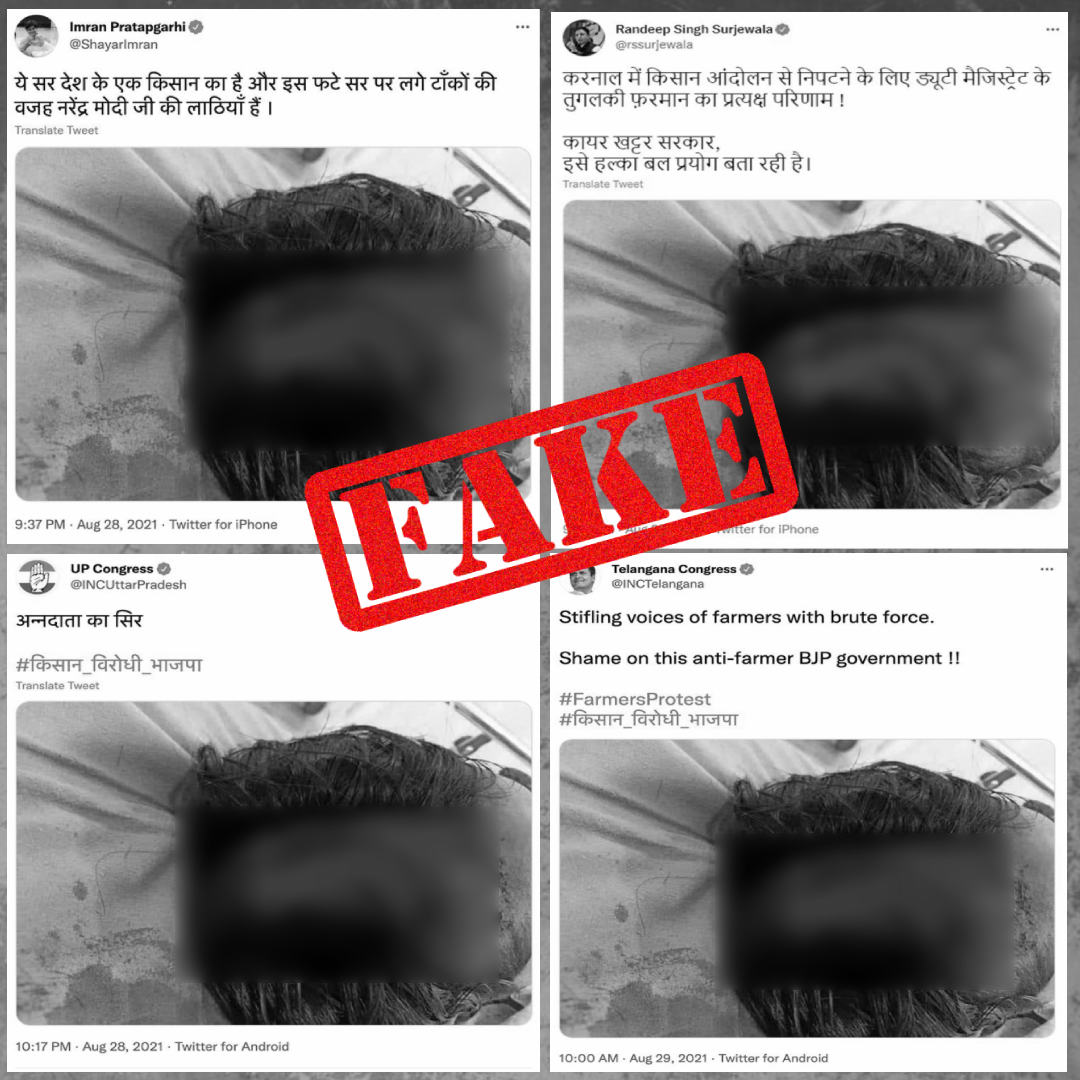 The man in the image is Tinku, a cow vigilante, who got injured on 25 August while chasing a vehicle of cow smugglers in Ullawas village of Gurugram.

Indian farmers have been protesting against the three farm laws for almost a year now. On 28 August, the Haryana police lathi-charged farmers near Karnal, where members of different farm unions assembled. Reportedly, around ten farmers were injured after police resorted to lathi-charge.

In the light of this, a disturbing photo showing an injured man with stitches on his skull is being shared, claiming he is one of the farmers wounded in the lathi charge.

The Indian National Congress's (INC) official Twitter handle shared the photo and captioned, "The end of #किसानद्रोही_बीजेपी is near". However, the tweet was deleted later. [Trigger Warning: The Logical Indian has blurred the image due to its graphic nature]

Imran Pratapgarhi, the national chairman of INC minority, shared the photo. He captioned, "ये सर देश के एक किसान का है और इस फटे सर पर लगे टाँकों की वजह नरेंद्र मोदी जी की लाठियाँ हैं।" ("This head belongs to a farmer of the country, and the reason for the stitches on this torn head is the sticks of Narendra Modi Ji"). Imran also deleted the tweet later. However, you can see the archived version of the tweet here.

The photo is being shared on social media with the same claim by several INC supporting handles. UP Congress and Telangana Congress also posted the image on Twitter.

Photo of the injured man is of one of the farmers wounded on 28 August in the lathi charge near Karnal.

The Logical Indian Fact-Check team verified the claim and found it to be false. The man in the photo is not a farmer, but a cow vigilante injured while chasing cow smugglers on 25 August.

According to The Tribune, the incident happened in Ullawas village of Gurugram, when the cow vigilantes were chasing the vehicle of cow smugglers. The report mentions that smugglers fired and threw a cow in front of the vigilante, resulting in the overturning of the latter's car.

According to Lokmat English, three cow vigilantes, Sunil Rawat, Rajbir Singh, and Tinku, were seriously injured and admitted to the Medanta hospital. The report mentions that incident is under investigation, and a case has been registered against the accused at Sector-65 police station in Gurugram.

Aaj Tak contacted Monu Manesar, the head of Bajrang Dal Manesar, who identified the man in the photo as Tinku, one of their cow vigilante who was injured while chasing cow smugglers on 25 August. Monu Manesar denied that the image is associated with the 28 August's lathi-charge on farmers near Karnal. Monu Manesar also shared the FIR copies of the incident.

In summary, farmers were indeed injured in the Haryana police's lathi charge on 28 August, but this picture is not associated with the farmers' protest. The man in the image is Tinku, a cow vigilante, who got injured on 25 August while chasing a vehicle of cow smugglers in Ullawas village of Gurugram.

Also Read: MP Govt Demolished Settlement Of Those Who Allegedly Raised 'Pakistan Zindabad' Slogans? No, The Viral Claim Is False