Many social media users are claiming that the bird flu is a myth and birds are dying due to the 5G spectrum trial done by Reliance Jio. The Logical Indian's Fact Check team investigates the claim.

In the backdrop of the recent bird flu outbreak in the country, many social media users are claiming that birds are dying due to the "testing of 5G spectrum being conducted by Reliance Jio" and people are being misled to believe that bird flu is spreading in India.

These social media users are denying the existence of bird flu and holding purported Reliance Jio's test of 5G spectrum responsible for the deaths of birds.

Chunni Lal Sahu, Vice President of Congress, Chhattisgarh, tweeted, "The news is spreading that birds are dying from testing of Jio's 5G spectrum, and bird flu is being cited as the reason?"

Some social media users are sharing a newspaper clip to claim that 297 birds died due to trials of 5G testing.

Birds flu is a hoax.

On keyword search, The Logical Indian found an article published by Business Today on December 23, 2020. According to the article, Mukesh Ambani had announced that 5G technology in India is going to be launched in the second half of 2021. Reliance Jio had also tweeted about it.

Another article by the Financial Express, published on January 7, 2021, said that the government will hold bidding of the spectrum on March 1. However, the airwaves for 5G won't be auctioned this time. The report also said that a total of 2,251 MHz spectrum in seven bands ranging from 700 MHz to 2500 MHz will be auctioned.

Another report by the Financial Express, published on January 13, 2021, said that some Telecom companies are seeking clarification from Department of Telecommunications (DoT) that whether 5G data can be launched on airwaves bought through the auction scheduled on 1 March or not. The DOT has also replied to the query, asking the operators to send their written queries by January 15, after which a clarification will be issued. In a Qualcomm report of December 2020, which showed a global snapshot of allocated/targeted 5G spectrum, one can see that India has not allocated any 5G spectrum. 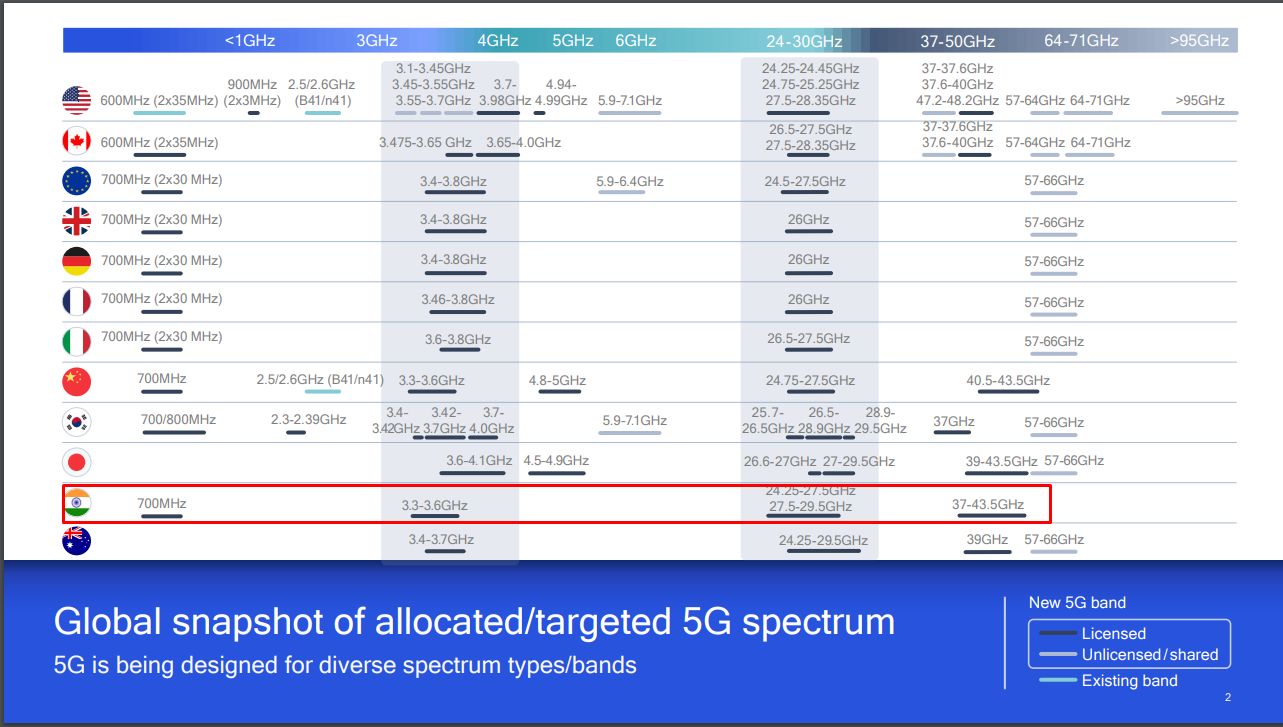 In the same Qualcomm report, it is mentioned that India had submitted a high level 5G recommendation in August 2018. But the form shows no update on it. Hence, we can evidently say that 5G Spectrum is not yet tested in India.

According to an article by The Times of India, on January 13, 2021, the government of India told people not to panic. Atul Chaturvedi, the secretary of the Union government's department of animal husbandry, dairy and fisheries, said that bird flu occurs every year in the country during winter as migratory birds come to the nation. Chaturvedi said, "The outbreaks usually happen in winter months, starting from September-October till February-March. Unnecessary panic need not be created about avian influenza — a common phenomenon in India. Some years, the bird mortalities are more and in others less. Every year, India gets the disease because of bird migrations and is declared bird flu-free subsequently after the outbreak is over."

In the same article of TOI, Chaturvedi said that India has a bird flu history of over 15 years since 2006.

Then what about the viral newspaper clipping?

The claim has been doing round since then. A Facebook user Tim Emslie, on April 22, 2020, also shared the claim of birds dying in Netherland due to exposure to 5G radiation.

Just an ordinary day at the west coast city of the Netherlands. All the birds standing in the trees in a park of the...

On April 29, 2020, Reuters debunked the claim of birds dying due to exposure of radioactive waves. According to Reuters, Wageningen Bioveterinary Research (WUF), had carried out post-mortems on the birds who died in the park of Hague in the Netherlands. The autopsy report revealed that the primary cause of death was bleeding from trauma. Some natural poison - mostly likely from yew berries – were found in the organs of the birds. WUF said that it couldn't guarantee that the birds were weakened by natural poison, but that it also couldn't be ruled out.  Also, Antenna Bureau of the Dutch government had confirmed that no 5G trial was happening near the park in which birds were found dead.

Unicef has also debunked the theory that 5G Spectrum kills birds. In the blog, Unicef had fact-checked a claim by a Serbian scientist, who said that 5G radiation is spreading coronavirus and also birds are dying due to it. In the context of this Unicef said, "The fifth generation of mobile internet is neither killing the living world nor spreading the virus."