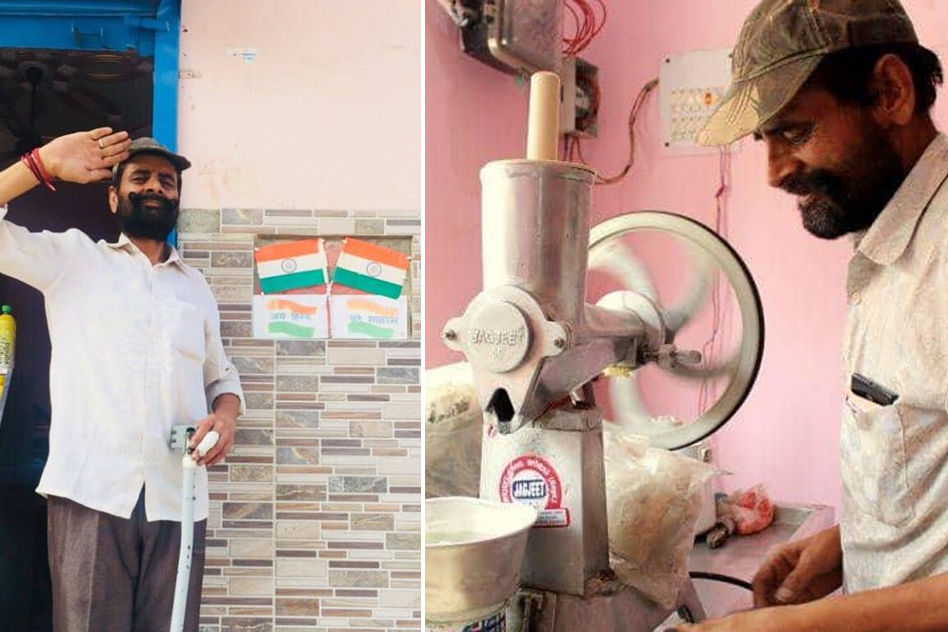 It has been over 18 years since he last served in the Indian Army and while most of his belongings were destroyed during the Kargil War of 1999, Satbir Singh continues to hold on to his army cap that he once wore as a Lance Naik of the Rajputana Rifle Regiment. Donning the camouflage-printed cap, Satbir Singh leaves his house, only to go to the juice shop that he now runs in North Delhi’s Mukhmelpur village.

Leaning heavily on his walking stick, the 53-year-old trudges towards his juice shop. However, the retired Lance Naik who once took six bullets for the country apart from being a fruit-juice seller has worked other odd jobs as well. Winning Tololing mountain in 1999 was a tough battle, but Satbir Singh’s personal struggle has been a complicated one to overcome.

Talking to The Logical Indian, Satbir Singh narrated his ordeal and the 19-year-long battle with the authorities which began after the Kargil War of 1999. Singh joined the Indian army in 1986 and was inducted within the Rajputana Rifles Regiment. At the beginning of his career, Singh was posted in various locations. It was the Kargil War which came as the toughest challenge for him and for the other soldiers who fought undeterred.

Like a true war veteran, Satbir while narrating his story said, “When my regiment was informed about the battle, we were given rigorous training on how to climb mountains.” On the midnight of June 12, India launched an attack against the Pakistani army. Satbir’s unit consisted of 24 soldiers, out of which seven were killed while the others sustained serious injuries. This victory is considered to be a pivotal point for India which led the country to win the battle.

As Satbir was the guide in his unit, he was the foreman who informed his unit of three insurgents who had taken cover behind the rocks. He said, “I threw a hand grenade at them and fired a round of bullets at them. While the three were killed by Satbir, another insurgent who was in hiding, showered bullets at Satbir’s unit. While one bullet hit Satbir in his ankle, the other under his knee which left him crippled for the years to come. For the next 12 months, Satbir had to stay at the Army Hospital in Delhi because he was unable to walk. Following this, Satbir, because of his inability to walk, was granted an early retirement.

While families of others at that time, who were injured or martyred received either petrol pump licences or an acre of land for their livelihoods, Satbir, who was spending his days on the hospital bed, was unable to fill the forms which were a prerequisite. He has two children, who were very young at the time.

Satbir said, “I got to know that those who are left injured after the Kargil War was to be given an acre of land for sustenance.” However, acquiring an acre of land posed a challenge as well. After constant efforts, the Central Government gave him an acre of land. He said, “I started growing vegetables in that land and started selling that in the market as well.” This land was snatched away from him in 2006. Not only that but the petrol pump, as promised has also been never given to him, said Satbir.

He said, “People with strong political connections created a ruckus and snatched away the land from me.” Not only that but they allegedly even threatened the retired soldier and even built a wall around the land to stop him from using it. Over the past 18 years, Satbir has claimed to have written hundreds of letters to different bureaucratic authorities with regards to his rights and entitlements. However, most, if not all went unanswered. He has also filed a number of RTIs (Right To Information) pertaining to the allotment of a petrol pump licence and his farmland being snatched away. He said, “I have copies of forms and letters which state that I am entitled to certain benefits.”

Irregularities in paperwork also led Satbir to only receive a part of his monthly pensions all this while. He said, “I was supposed to receive Rs 40,000 a month, but I had been getting Rs 22,900 for all these months.” However, his Record Officer has assured that he is going to get the full pension amount in the future.

Rs 22,900 in today’s world is not enough to sustain a family of four. While his son studies in the second year of college, Satbir, right from the beginning had to start working at various jobs to sustain his family. He said, “I have sold fruit, cut stones and set up electricity boards as well.” Now, he just sells juice at his store where he is helped by his younger son. However, income from his juice shop isn’t as profitable as well. He only makes Rs 500 a day and said that people in villages are not too keen on buying fruit juice.

Even though his disappointment for the bureaucratic inefficiency is noticeable, Satbir remains indebted to the Indian Army. He said, “They are my family and I am forever grateful to them.” The military too, helped Satbir to pay for his children’s school fees, which were otherwise promised to him by the Delhi government.

In 2019, India will celebrate 20 years of Kargil War’s victory, but Satbir Singh and probably more like him are still waiting to get their dues. Satbir Singh took two bullets for the nation, he braved the situation to lead his unit towards victory. We talk about respecting the military personnel who render their valuable services for the protection of millions of countrymen, but the reality is just different. Such injustice towards ex-army men should be taken into account by those who are sitting at the helm of affairs.