There was a time when Enabavi was just another impoverished village in the arid plains of Warangal in Telangana, full of frustrated farmers, some of whom committed suicide to escape indebtedness and penury. But the tiny village of 52 households refused to give up and banded together to change their fate.

In 2006, it created agrarian history by becoming the first village in Telengana to be fully organic and entirely free of pesticides, fertilizers and genetically modified crops. Since then, thousands have visited Enabavi to draw inspiration from its sustainable lifestyle, which was crowned by an appearance on Sathyameva Jayathe, a popular TV talk show hosted by film star Aamir Khan.

Crossing barren lands, huge cotton ginning mills and crowded cotton markets on dusty roads, one can see grazing sheep and cows, green fields and bullock carts that depict the picture of a typical village. The villagers were grappling with many problems before they started on their journey to become an organic oasis. Increasing farm input costs and low yields, increasing farm suicides and health issues sent the villagers of Enabavi on a retrospective mode. They decided to shun chemicals and embrace organic cultivation. The move has brought about many positive changes.

Many problems, one solution

Skin diseases were common among men and women farmers who handled chemical farm inputs. “Women in their early stage of pregnancy, who worked when chemical pesticides and fertilizers were applied in the fields, suffered miscarriages,” Ponnam Padma, who had suffered three miscarriages, told VillageSquare.in. Besides these, farmers complained of respiratory problems, headache and drowsiness.

More than that, what affected the villagers the most were the suicides. Crop loss leading to increasing debts pushed many farmers to suicide. This compounded the financial problems of the deceased farmers’ families. 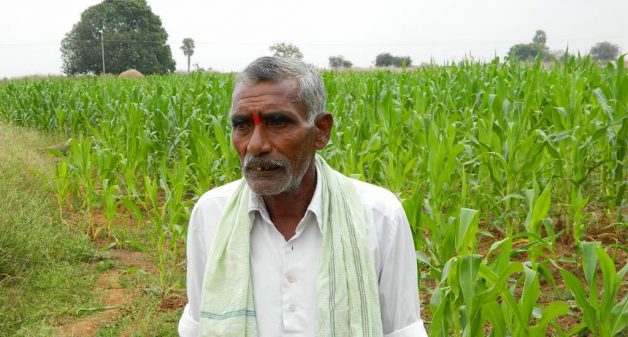 Switching to organic farming, Enabavi’s arid lands have turned green, thanks to the initiative of village chief Ponnam Mallaya. (Photo by Chithra Ajith)

Ponnam Mallayya, the village chief, held consultations in the village. The villagers already had a feeling of unity, with no divisions among them along community lines. They came together in finding a solution for their problems. Organizations such as Centre for Sustainable Agriculture (CSA) and Centre for Rural Operations and Programs Society (CROPS) encouraged them to turn Enabavi into a chemical-free village. The villagers decided to go organic.

The decision was not taken in a single day. The villagers were hesitant. It took a long time for them to accept the idea. A farmer recalled the questions that ran through their minds. “Would organic farming be profitable? Would it solve our health problems? Would it reduce debts?” When experts from CSA and CROPS clarified the doubts of the villagers, they agreed to give up chemical farm inputs.

With the majority of villagers being farmers, each owning a few acres, the 52 farmer families worked hard in their 272 acres of land. They switched to traditional seeds, natural pesticides and manure. Livestock regained their importance in farming. With each household having about five cows, a private dairy has been collecting the surplus milk. This augmented farm incomes.

Earlier the village had a single pond. The farmers cultivated when water was available. Most grew a single crop of cotton. The land was left fallow the rest of the time. While turning organic, they sought expert opinion to manage their water resources better. Accordingly, they drilled 26 tube wells and 11 open wells. They started harvesting rainwater.

Judicious use of water resulted in their arid land becoming green with cotton, vegetables and pulses. They started multi-crop and crop rotation methods. They gave up growing BT cotton. With the soil being best suited for cotton, the villagers find that organic cotton has good demand. “Buyers come here to ensure that they get the required quantity,” Mallayya told VillageSquare.in. 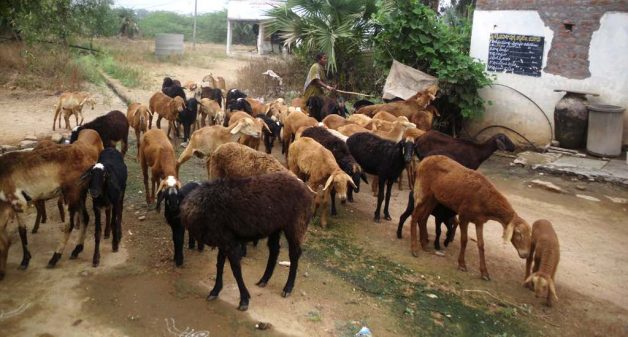 Livestock have regained their importance due to organic farming in Enabavi. (Photo by Chithra Ajith)

“Even the cows eating BT cotton leaves had illnesses,” said a villager. Now the village is almost free from health issues. Now there are no complaints of dryness of skin, itching and skin lesions.

The farmers have formed self-help groups to share seeds and to bargain collectively for their produce. They sell the produce through a marketing channel in the brand name Sahaja Ahara, meaning natural food. “From 2006 Enabavi holds the position of a complete organic village in terms of agriculture and farming,” G.V. Ramanjaneyalu, executive director of CSA, told VillageSquare.in. Enabavi’s produce is in high demand in the market as they are organic.