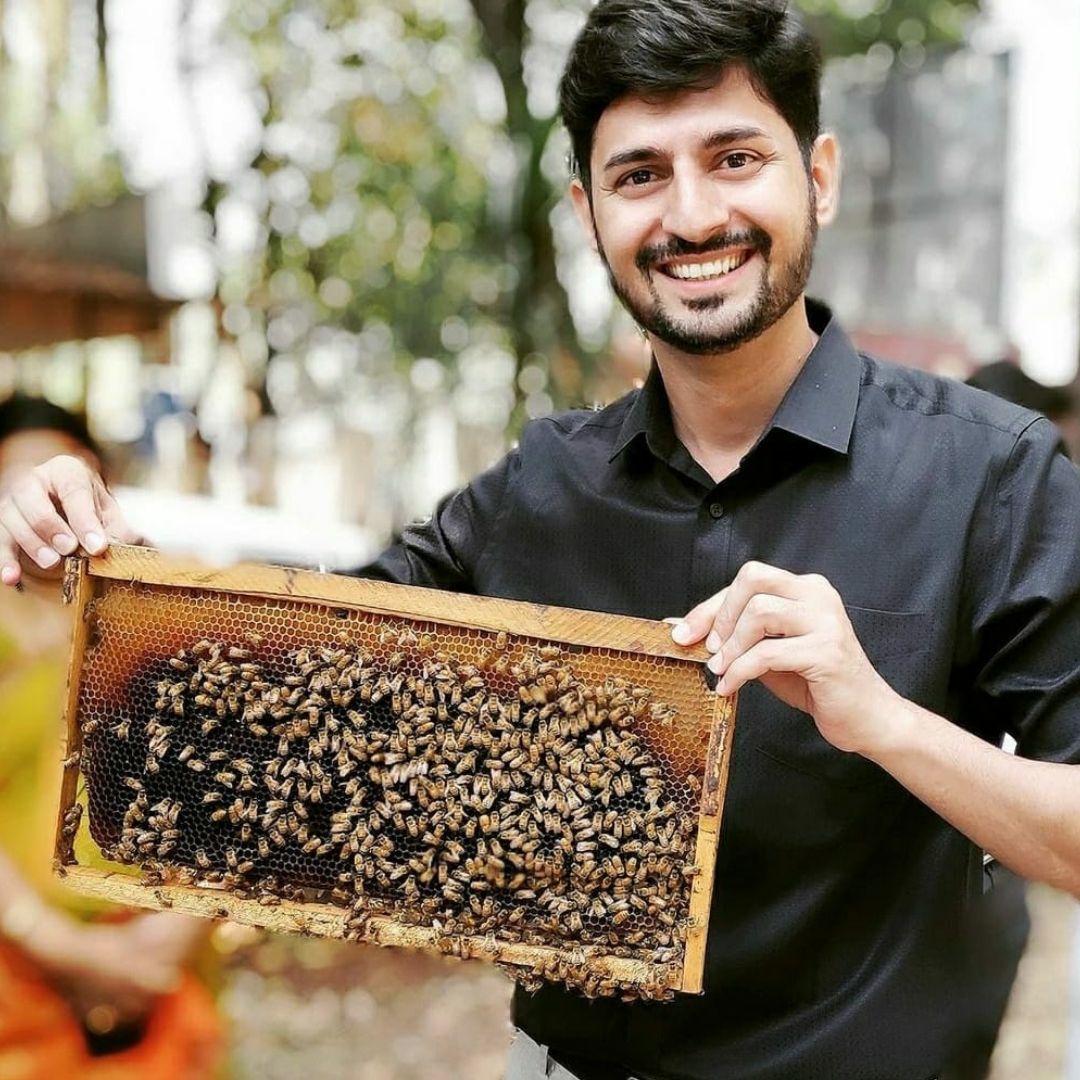 Devendra Jani, a Pune-based IT professional, is passionate about bee conservation. His initiative 'Bee-The Lead' has reached thousands with the message that "bees are to be loved and not feared."

Devendra Jani's introduction to 'bees' was through his tomato plant. Since childhood, the Pune-based IT professional has been inclined towards growing veggies. He tried growing his own food on the balcony, as he witnessed alarming use of poisonous chemicals and pesticides in farms.

"I was getting a supply of chilly, moong dal, ginger, spinach, tulsi and mint. However, I was not getting tomatoes. The plant was suffering from a flower-dropping syndrome, where the flower was not converting into fruit," he told The Logical Indian.

A quick online search made him realise that 'bumble bees' are the best pollinators for tomato plants, but they could not fly high to the fifth floor of his apartment. This got him interested in bees and he ended up visiting the Honeybee Research Center in the city. He learned many amazing facts and secrets about the insect there.

"Like everyone I was also afraid of bees. But the training changed my point of view towards them. They are much more to us than sting and honey," he said.

That's how 'Bee-The Lead' was born, a bee conservation initiative to transform human behaviour towards bees.

Bees Migration To The City

These days, cities are safer for bees compared to rural habitats where there is mono-crop cultivation, use of pesticides and chemical fertilisers.

"I regularly get calls from citizens who have attended my session, asking to remove beehives on their building. Just like we don't chase all the dogs out of the city because of one dog bite, similarly, it is possible to co-exist with bees around us. It is observed that even if the beehive is relocated, a bee will return to that place. The best solution is to live in tandem with nature," he explains.

Over the last 18 months, social distancing, sanitisation, and vaccination are some of the standard terms used by the people. Surprisingly, bees have similar behaviour to humans on health and hygiene.

Bees live in larger groups and share food mouth to mouth. But they have unique methods to defend against various diseases and curb them from spreading. They spray the hive with antimicrobial resin to avoid any infection spreading within it. Propolis is the perfect sanitiser bee produce for their hive.

Virus-infected bees practice social distancing. The infected bee avoids close interaction with its healthy counterparts inside the hive. They practice hygienic behaviour, where healthy worker bees can smell the infected larvae and remove those broods from hives, to avoid the spread of diseases.

The queen bee also vaccinates eggs with fragments of proteins from disease-causing pathogens before eggs are laid. Nurse bees pass the antigens to the queen for inoculation into her eggs via royal jelly. Nurse bees also feed the larva for the initial days. This way they get vaccinated twice – by the queen and by nurse bees.

The importance of having an oxygen-rich body and healthy lungs is very predominant during pandemic times. Breathing exercises and pranayama have come to the rescue. The ancient form of yoga has also taken inspiration from bees in the form of poses like bhramari pranayama or humming bee breath. It lowers one's blood pressure, thus relieving hypertension. It is estimated that humming increases the endogenous generation of nitric oxide level multifold. Bhramari, by enhancing the expression of nitric oxide and increased carbon dioxide with the help of extended exhalation and alkaline pH, prevents coagulopathies and morbidity due to COVID-19.

Just one queen bee runs the whole colony of 60,000 bees flawlessly. Most of the bees in the hive are worker bees who support the queen to get food, nurse the babies, construct the hive and its security. Unlike humans, the selection of queen bee is a democratic process where the worker bees decide who will be the queen of the hive. Another surprise is that all the worker bees are female bees. Few drones (male bees) mate the new queen and die immediately after the mating. Bee colony activities are organised by complex communication between individuals through pheromones and the bee dance language. Bees dance in hives to communicate with other forging bees about the food source.

"I was also amazed by their baking skills. Yes, bees make bee bread used to feed the larvae and baby bees. It's the most nutrient-dense superfood made of honey and fermented pollen. Workers take care of the queen and even feed the queen," Jani stated.

However, at times they make the queen go on a crash diet to lose her weight, to help her fly from the hive during swamping season. All the hives are organised in a similar fashion – top portion has honey, side portion has pollen and lower portion has eggs and brood.

Not All Bees Live In Hives

There are more than 2,000 bee species, and many live a solitary life. These solitary native bees are also estimated to carry out better pollination than social honeybee species. With a focus only on honey-producing bees, these indigenous species are in danger.

Jani says that the government needs to form a policy to protect indigenous bees before it is too late for the biodiversity.

"My favourite and most beautiful native solitary bees are 'blue banded bees'. It can perform a special type of pollination called 'buzz pollination'. A blue banded bee can grasp a flower of this type and shiver her flight muscles, causing the pollen to shoot out of the capsule," he said.

Another species, cuckoo bees have evolved the brood parasitism behaviour of laying their eggs in the nests of other bees, reminiscent of the behaviour of cuckoo birds.

Not Just For Honey

Jani said that he was fascinated by the whole process of making honey. Without clearing any chemistry exams, they know that sugar will last longer if they break it into sucrose and fructose. Bees flap their wings to let the water evaporate from the nectar, pass it from one bee to another until it is thick enough to cap it inside a cell for winters. A single bee takes her whole life span just to make half a tablespoon of honey.

"Most of us only see bees as a honey production machine. But their major contribution is as pollinators, which are a vital part of our ecosystem, responsible for the food security for not just humans but all living beings," he added.

The IT professional has also been training farmers to help them realise the importance of bees in farms. "It is observed that pollination done by bees helps increase the farm yield by 80 per cent," he added.

Jani takes sessions in schools, colleges, and corporates to sensitise youths about bees. In schools, he runs a 'Tree Friend' project where students are given bee-friendly plants to nurture for a year. Kids take care of the plant and flaunt it as a friend to others.

"I find kids are more empathetic towards bees than adults who already have their conceptions. It is difficult to change human behaviour after it is solidified. When these kids grow up, they will have empathy for these tiny insects. It is fulfilling to inspire the next generation of eco citizens with guides, lessons, and activities to get them buzzed about bees. I feel bees are not to be feared, but to be loved," he concluded.