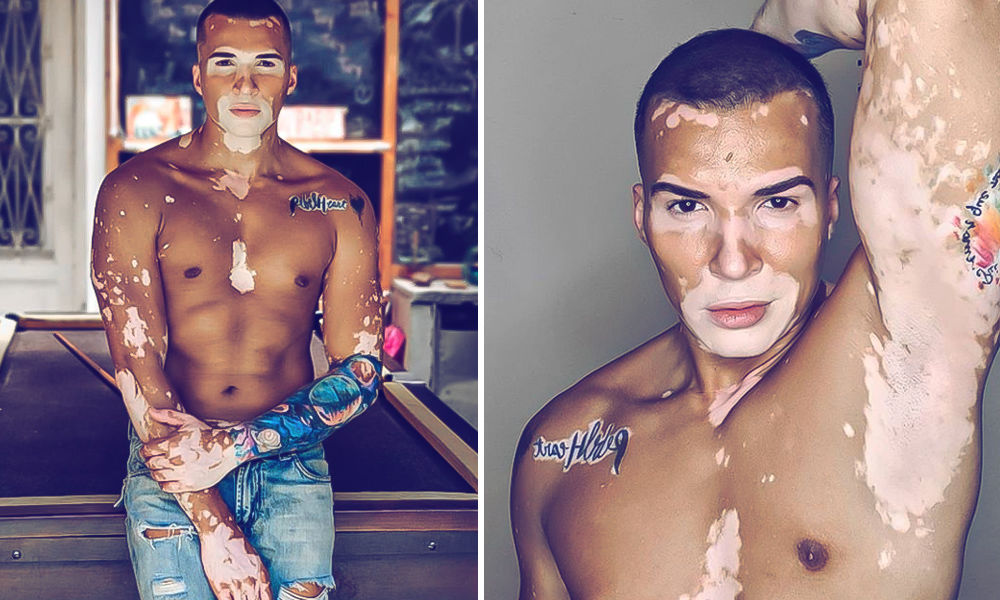 'Flaunt It With Pride': This Brazilian Model With Vitiligo Who Once Hid Behind MakeUp, Tattoos Is Now Inspiring Many

37-year-old Roger Monte, from Brazil's capital city Rio De Janerio, battled depression to overcome his inhibitions regarding his rare skin condition. After developing vitiligo, a rare long-term skin condition in which white patches develop on the skin, Roger's life took a downward spiral when he shunned social life and had a hard time coming to terms with reality. He, however, braved the adversities and redefined beauty standards to become a model.

37-year-old Roger Monte, from Brazil's capital city Rio De Janerio, battled depression to overcome his inhibitions regarding his rare skin condition. After developing vitiligo, Roger's life took a downward spiral when he shunned social life and had a hard time coming to terms with reality. Vitiligo is a rare long-term skin condition in which white patches develop on the skin. Roger, however, braved the adversities and redefined beauty standards to become a model.

Speaking exclusively to The Logical Indian, Roger explained his journey from locking himself up in his room to realising the power of 'acceptance' and then going on to inspire many.

TLI: How did you come to terms with life after you were diagnosed with a rare skin condition. How did you overcome the difficulties?

Roger: I was barely 23 when the first spot appeared. I remember that at the time I didn't take it seriously since I had no history of people with vitiligo in my family. Hence, I did not visit the doctor. Eventually, a spot appeared in my mouth, it was at this moment that I started to worry. I looked for a doctor even though I was afraid of the diagnosis and my world fell apart when I discovered that it was vitiligo. I thought my life was over. I lost my identity.

I didn't recognise myself anymore. I didn't want to exist with this condition anymore.

I kept locking myself up, shying from having any conversation. I didn't like to be seen or photographed. I was full of fears. Those were the dark years and then I decided to camouflage my spots with makeup. I started to hide the patches with tattoos. I wore clothes that covered as much skin as possible and I didn't like to go to beaches and well-lit places because I didn't want people to analyse me. It was very difficult to live like that, on the defensive, without liking yourself and reducing yourself to nothing.

The way I had started feeling about myself changed everything for me. It took me about 12 years between makeup, treatments, recipes of the most diverse, trying to improve my condition. And I had reached the point where I could not take it anymore.

For the first time, I plunged and revealed my real self —without makeup and that my life changed. Compliments, words of affection, love from people across the globe poured in. I felt welcomed, I felt safe. I felt that there were people going through the same as I was and then I decided, I had to do something to help them, in some way.

I made my social media, my therapy. Taking one day at a time, I was reborn until I found myself and recognised myself again.

TLI: Were you criticised or trolled due to your skin condition? How do you deal with it?

Roger: Yes, there are still people who are disgusted to touch me. people who think they will get vitiligo just by physical contact. They are ignorant people, before that it did affect me. Now, I try to explain in the most didactic way possible and if I still feel a certain prejudice, I simply ignore it. Now, none of this affects me, because I am extremely satisfied with how I look in the mirror.

TLI: How difficult is it to defy the mainstream idea of what should be 'beautiful' or 'handsome'?

Roger: There were no representatives of our condition in the world. It used to be Michael Jackson but I do not think that the world took it in the right stride.

However, thanks to Winnie Harlow, the Canadian fashion model with vitiligo, the "standard of beauty" has changed. The doors opened to define and redefine the beauty standards and now I no longer seek to be like anyone else. I believe that each one is as beautiful as it is and what we must do is always look for our own best version.

TLI: Do you think that there is a dire need for the younger generation to be more empathetic? What would be that one thing you would want to tell them?

Roger: Yeah! Not just younger, the older generation too!

People should always put themselves in the other's place before distilling hatred out there. The internet is great, but there are people who are in it just to hurt others. We might pretend not to care, but it affects us. You should always put yourself in the other's place and should refrain from doing anything that you don't want me to do with you.

TLI: Did you get support from your family and friends during these tough times?