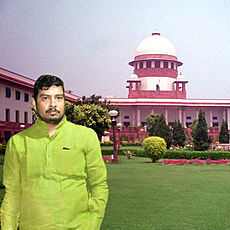 The woman had allegedly lodged a complaint against the MP in May 2019. After the Apex Court denied bail, the minister surrendered and is currently in jail. However, the woman alleged continuous harassment by the minister's close aide.

A woman and a man suffered severe burn injuries after they set themselves ablaze outside the Supreme Court on Monday, August 16. Police officials rushed them to the hospital and their condition is stated to be critical.

Before setting themselves on fire, the duo recorded a Facebook Live video wherein the woman said she had lodged a complaint against Bahujan Samaj Party MP from Ghosi Atul Rai for sexually assaulting her in May 2019. She alleged continuous harassment by the close aides of the minister and the police because of her complaint.

The Apex Court had denied Rai's bail the same month. He surrendered in Varanasi court in June 2019 and is currently in jail, Hindustan Times reported.

Later in December 2020, the victim filed another complaint alleging the MP and his close aide for tarnishing her image through social media and running vicious propaganda against her and the witness in the case. She also alleged that her family was harassed by the politician and his associates ever since the complaint was filed. On the other hand, a complaint was lodged by Rai's brother in November 2020, accusing the woman of forging documents about her birth date.

Non-Bailable Warrant Against The Woman

Police then registered a case under sections of cheating, forgery, and criminal conspiracy against the women who hails from Uttar Pradesh's Ghazipur. A non-bailable warrant was also issued against her after she remained untraceable despite several raids.

"They have issued a non-bailable warrant against me. The judge has also summoned me. All are part of the conspiracy. Me and my witnesses were trapped," she alleged, The Indian Express quoted.

Before pouring kerosene on himself, the man accused the Uttar Police of filing false cases and issuing non-bailable warrants on them. "This is Uttar Pradesh's judicial system," he alleged.

According to police, the woman has suffered 85 per cent burn injuries, whereas the man has 65 per cent injuries.

"We do not know how they are related to each other. Both are not in a state to record their statements as of now," a senior police official said, as quoted by The Indian Express. Officials also said that their families have been informed and all the details have been shared with UP police.