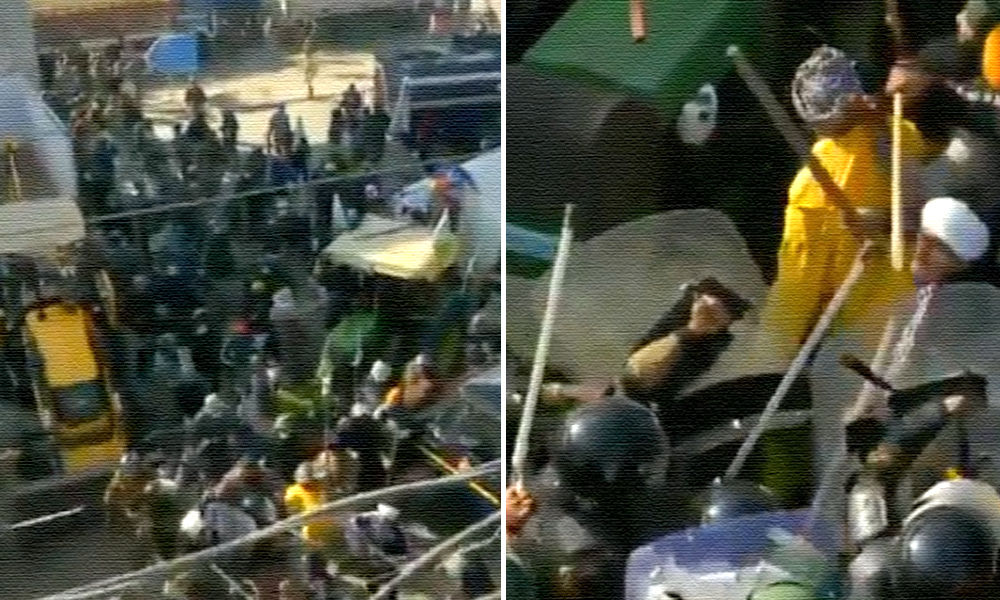 As nearly 50,000 farmers march towards the national capital protesting against the Centre's new farm laws, the Delhi police has strengthened its presence in the border areas. Undeterred by barricades, tear gas and water cannons, farmers continue to protest in large numbers.

As nearly 50,000 farmers march towards the national capital protesting against the Centre's new farm laws, the Delhi police has strengthened its presence in the border areas. Undeterred by barricades, tear gas and water cannons, farmers continue to protest in large numbers.

Protests erupted in Rohtak, Haryana on Friday, after a 40- year-old farmer died in a road accident, while he was on his way to Delhi.

The Delhi Police on Thursday, November 26, asked the Arvind Kejriwal government for permission to use 9 stadiums as temporary jails for farmers expected to be arrested during the protests. Aam Aadmi Party legislator Raghav Chadha, however, has appealed to the Delhi government to deny permission, saying the farmer of the country is "neither a criminal nor a terrorist".

I urge the Delhi Govt to deny permission for setting up temporary prisons. The farmer of our country is neither a criminal nor a terrorist.
Right to protest peacefully is enshrined in Indian Constitution - Article 19(1) and protests are the hallmark of a free, democratic society. https://t.co/cqMvEb181r

Several dramatic visuals of the 'Delhi Chalo' march and the violent clashes have surfaced on social media.

Farmers are seen clashing with security forces, as they tried to head towards Delhi as part of their protest march against Centre's Farm laws. pic.twitter.com/L67PN4xYKy

"It is expected that more than 50,000 farmers will be standing at the Delhi border by today evening. The numbers are expected to swell through the night as thousands of tractors and trolleys are carrying farmers, women and children from interior areas of Punjab," a statement from Samyukt Kisan Morcha and All India Kisan Sangharsh Coordination Committee read.

The farmers have said that they will not return until the Centre's three farm laws, which they claim have left them vulnerable to the mercy of big corporates are withdrawn.

The Punjab farmers face a violent clash with the police on a bridge nearly 200 km from Delhi. As the barricades were flung and thrown into the river, the cops responded with tear gas and water cannons.

The #Farmers have broken through the #Sonipat barricade.
They pushed away the containers, filled the holes, removed cement structures & created a road despite police using water cannon. @mlkhattar is done now it's @narendramod at the Delhi Haryana Kundli border. #DelhiChalo pic.twitter.com/POr9cXqBQJ

& @mlkhattar @narendramodi thought the cement structures could stop them.

The horrible night came to an end with an enthusiastic morning & amazing energy from #farmers, which cleared the road in no time. #DilliChalo #FarmersProtest #FarmersDilliChalo pic.twitter.com/gOlRkg5RKW

Watch: Farmers try to bring down the cement blocks placed by the Haryana Police at the highway in Sonepat.

They plan to cross over and move to Delhi. #FarmersProtest #दिल्ली_चलो pic.twitter.com/8YRXo8xmID

In Haryana's Sonipat, in the middle of harsh temperatures, water cannons were blasted at farmers as the police tried to disperse a small group who were marching towards Delhi.

A video of one particular clash, which shows a young protestor jumping and climbing onto a police car to turn off the water cannon which was being blasted at the farmers has gone viral.

How a young farmer from Ambala Navdeep Singh braved police lathis to climb and turn off the water cannon tap and jump back on to a tractor trolley #farmersprotesthttps://t.co/Y9RZJBdD8E pic.twitter.com/NcN0JpMxd2

Thousands of farmers have been making their way towards Delhi since yesterday. Most of them spent the night at Karnal and had started moving towards Panipat. Swaraj India chief Yogendra Yadav who was leading a team of farmers was detained by the Haryana Police at Gurugram.

Meanwhile, Haryana Chief Minister Manohar Lal Khattar attacked his Punjab counterpart Amarinder Singh and accused him of playing "cheap politics" during the pandemic. Singh, he said, was "only tweeting and running away from talks" over the issue.

Amarinder Singh, however, questioned if he was inciting the farmers, then why were farmers from Haryana joining the protest.

In Uttar Pradesh, over 2000 farmers were stopped at Bilaspur turn, Rampur as the police stopped them from moving towards the national capital. Social activist Medha Patkar was stopped from entering Uttar Pradesh at its border with Rajasthan.

Farmers from six states, including Uttar Pradesh, Haryana, Uttarakhand, Rajasthan, Kerala and Punjab are marching towards Delhi. The call to march, initially given by the All Indian Kisan Sangarsh Coordination Committee (AIKSCC)- a body of nearly 200 farmers' organisations across India has received support from nearly 500 farmers' bodies.

For nearly three months, the farmers have been agitating against the centre's 'historic reforms'.

The Farmers' Produce Trade and Commerce (Promotion and Facilitation) Bill, 2020 allows the electronic trading of farmers' produce and allows the setting up of transaction platforms for facilitating direct online buying and selling of farm products.

Soon after the bills received the President's nod, Agriculture Minister Narendra Singh Tomar had said: "I want to assure everyone that the bills have nothing to do with MSPs. MSPs were there and will continue. I would request everyone to reconsider their views on the farm bills. The two bills are historic and will bring a change in the lives of the farmers. The farmers will be able to freely trade their produce anywhere in the country."

Later, Prime Minister Modi had said that there is an attempt by the opposition to mislead the farmers of the country with false news and data.