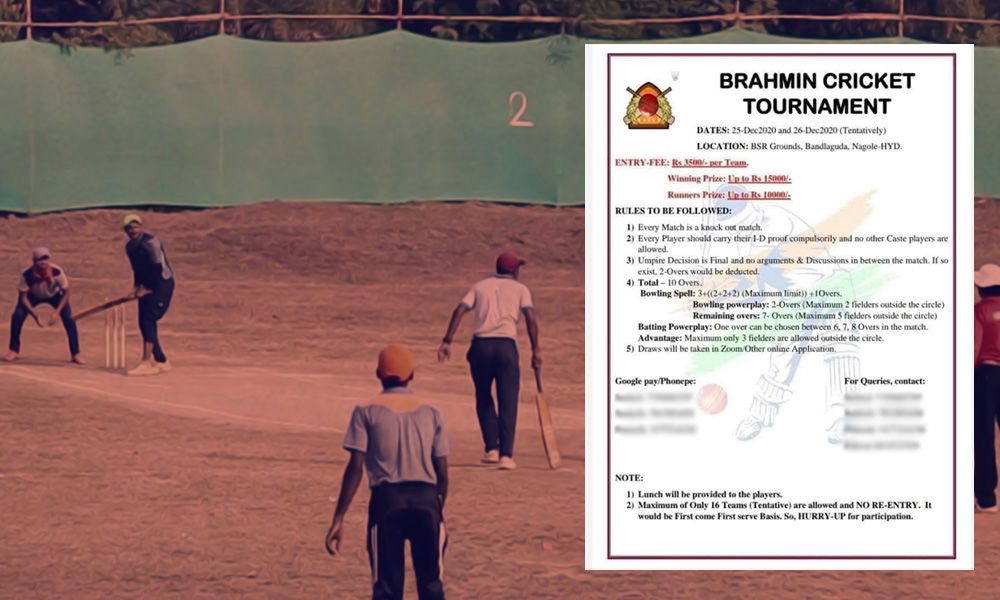 "Where Is The Problem?" Asks Organiser Of Brahmin 'Only' Cricket Tournament In Hyderabad

On being asked if they don't find a Brahmin only tournament casteist, the organizers, who are engineering students, told The Logical Indian that they did not find any problem with it.

Sports knows no caste or religion. Yet the 'casteism' which has taken deep roots in India has spread across so much that some people in the country want to play cricket 'only' with the people of their 'own caste'.

A Brahmin Cricket Tournament that happens every year in Hyderabad, caught the eye of social media after the tournament poster that asked only 'Brahmin' community to participate, surfaced online. The poster specifically mentioned that 'no other caste players are allowed'.

The tournament was held on 24th, 25th December 2020 in Uppal, Hyderabad. It was primarily organised by four engineering friends who happen to be Brahmins.

"We held the tournament to encourage the people of Brahmin community. We would have done it in support of any other community. I don't see any problem here. We identify ourselves as Indians, and not as a 'Brahmins'," one of the organisers told The Logical Indian.

On asking why the focus of the tournament was solely on the Brahmin community, the organizer said, "The idea was to support and encourage the community members to play the sport."

"We did not even realise that our tournament-poster would go viral just because it is a 'Brahmin' tournament. We never intended to be intolerant. In fact, there are people from other communities also among the organisers of this tournament. All were supportive," he added.

The poster of the 'Brahmin Cricket Tournament' however, did not go down well with the social media users.

A exclusive tournament to assert the #brahmin_merit with the support of the brahmin State. pic.twitter.com/uqoIBJF1a9

Some pointed out how pervasive and regressive 'Brahmin elitism' can get.

Am I surprised? No! I grew up in this city so I know how all pervasive and regressive the Brahmin elitism is (my own extended family practises modern forms of untouchability).

But how are we letting this divisive mentality foster, @KTRTRS and @GHMCOnline? https://t.co/fS2T0YI7hw

Some even stressed on the fact that casteism, which continues to be rubbished as a problem, is in fact here to stay.

Exclusive cricket tournament for brahmins. Imagine this, but with education that's at least a 1,000 years of subcontinental history right there. https://t.co/xYkKwxrJXR

"Brahmin cricket tournament"
"No other caste players are allowed"
Sure...tell me caste isn't a problem today.
I guess this is the first time I've seen it articulated openly but this is every cricket tournament no? (Also every company, every decision making body no?) https://t.co/Q56ObZs67c