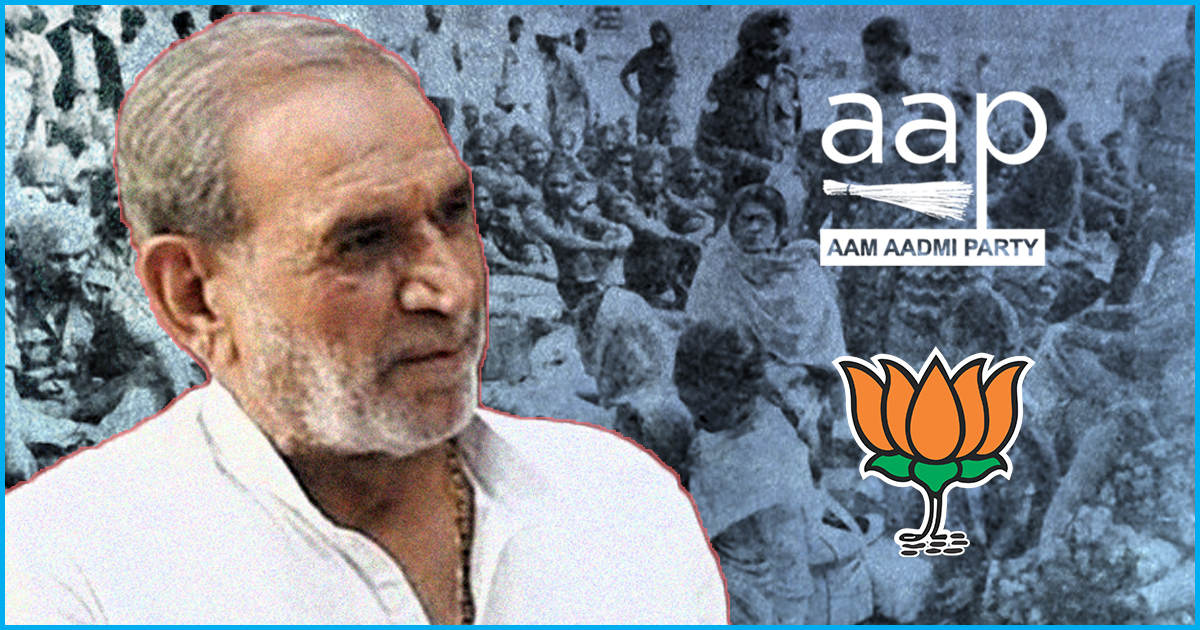 BJP & AAP Claim Credit For Conviction Of Sajjan Kumar In 1984 Sikh Riots: Do They Deserve It?

On Monday, the Delhi High Court convicted senior Congress leader Sajjan Kumar in a case related to the 1984 anti-Sikh riots. Sajjan who was accused of killing five members of a family was found guilty, overturning his acquittal by a lower court. This judgement, better late than never, is proof of justice for many people who lost their loved ones in the riots. Soon after the judgement on the genocide that killed as many as 2,733 people in the national capital, both BJP and AAP claimed credit for the verdict.

While BJP congratulated PM Modi for the “delayed vindication of Justice”, AAP approved compensation to the victim family. However, the BJP calls AAP’s move a petty politics game. Between the slugfest of credits, The Logical Indian explains a little more on the case.

On 31 October 1984, the then Prime Minister Indira Gandhi was assassinated by two of her guards, who belonged to the Sikh community. The assassination of the PM led to violence that roughly lasted for three days and thousands of lives were lost. The violence did not limit itself in just the national capital, but it had also engulfed several other Indian cities, including Kanpur, Bokaro, Jabalpur and Rourkela. In Delhi alone, 2,733 Sikhs were killed at that time. This episode of communal violence in the newly independent India is considered one of the bloodiest and most brutal episodes, as reported by The Caravan.

After almost 34 years of the incident, 73-year-old Sajjan Kumar was found guilty. The Delhi HC called the horrific incident a “crimes against humanity” that would continue to haunt the society for a long time, as reported by Scroll. Talking about the verdict, union minister of Finance Arun Jaitley said, “Sajjan Kumar’s conviction by the Delhi High Court is a delayed vindication of Justice.” Criticising Congress for the incident, he added, “The Congress and the Gandhi family legacy will continue to pay for the sins of the 1984 riots.”

Justice for the victims of 1984 was buried by the Congress – the NDA restored fairness and accountability.

The judgement came at a time when Kamal Nath, another accused in 1984 Sikh riot, took oath as the 18th Chief Minister of Madhya Pradesh. Allegedly, Nath was present at the Rakab Ganj Sahib Gurdwara where a mob caused riots and burnt two men alive. It is also reported that he seemed to have given directions to the crowd which unleashed an attack on the Gurdwara.

The BJP president, Amit Shah, also took a dig at the Congress party. He said, “no one had any doubt” about the Congress’s role in the attack, as reported by Scroll. He said that that the Congress workers and leaders went on a rampage at the time of the incident, raising provocative slogans, raping women and murdering men in cold blood. He also said that no one was ever found guilty despite the formation of several commissions and eye accounts. While giving the credits to Prime Minister Modi for the verdict, Shah said, “I thank PM for setting up the SIT.”

I want to thank Prime Minister Shri @narendramodi for setting up an SIT in 2015, which initiated re-investigation into several cases of 1984, pending for over three decades. I am grateful to the Court, which has delivered its judgment, bringing relief to the traumatised families.

Union Minister Harsimrat Kaur Badal: Congress leaders, at the behest of the PM, went to Sikh houses along with police. Even today when I think of all that happened, it gives me goosebumps. Children were crying, they could not utter a word. I still remember it today. https://t.co/6Lwg94Vvrs

Finally the wheels of justice are moving. Sajjan Kumar gets life sentence in the 1984 state sponsored Sikh genocide.

Prime Minister Modi’s govt facilitated the re-investigation and formed a SIT to investigate the 1984 genocide. Judiciary looked at all the cases afresh. #Respect

The Aam Adami Party was not left behind in taking the credits for the historical judgement. The party president and the Delhi Chief Minister Arvind Kejriwal welcomed the Delhi HC’s verdict. He tweeted

I welcome Delhi High Court verdict convicting Sajjan Kumar in 1984 riots case.
It has been a very long n painful wait for innocent victims who were murdered by those in power.
Nobody involved in any riot should be allowed to escape no matter how powerful the individual maybe.

Delhi government spokesperson Nagendar Sharma patted the AAP’s back for the verdict.

It was the new-born tiny party's Delhi government of 49 days in 2013, whose chief minister @arvindkejriwal for the first time recommended setting-up of an independent SIT to probe the 1984 anti-Sikh riots 5/n

“This compensation is not being paid from the state government funds but being paid on the orders and from the funds of the central government and hence the Kejriwal government has no right to take credit,” said the BJP party in an official statement, as reported by The Economic Times.

After the catastrophic event in 1984, there were several inquiry commissions set up to probe the role of people involved in it. In 2000, the Nanavati commission was set up, headed by a retired Judge of the Supreme Court of India, Justice G.T. Nanavati. The commission was set up by the National Democratic Alliance (NDA) government to probe the “killing of innocent Sikhs” during the 1984 anti-Sikh riots.

According to the reports, the commission was supposed to submit its report within six months. However, it took five years after several missing several deadlines. According to The Hindu, the commision presented its report in February 2005. In the two-volume report, the commision said that all the cases in the 1984 riots should be clubbed and should be looked into again, as reported by The Print. In March 2009, the CBI filed its final investigation report before a Delhi Court.

After this, a fresh FIR was filed against Congress leader Sajjan Kumar, however, in 2013, the trial court cleared Kumar of all charges relating to his alleged role in anti-Sikh riots, as reported by the BBC. However, the court found retired naval officer Captain Bhagmal, former Congress councillor Balwan Khokhar, Girdhari Lal and two others guilty.

After Kumar’s acquittal, in May 2013 the CBI and the victim’s family then filed a plea in the High Court. The Central Bureau of Investigation (CBI) also challenged the conviction of the other accused, reports The New Indian Express. Of the 241 related cases, the CBI started examining four cases. In one of the cases, MLA Sajjan was the main accused, as reported by The Hindu.

The Delhi High Court gave its verdict on the case on December 17, in which it found Senior Congress leader Sajjan Kumar guilty. So the claims of both the national parties of the credits over the anti-Sikh judgement seem to be incorrect.

Who constituted the SIT?

In 2014, ahead of the assembly polls in Delhi, the central government in February 2015, had set up a Special Investigation Team (SIT) for reinvestigation of the 1984 anti-Sikh riot cases. Claiming that it was Arvind Kejriwal who had first recommended setting up of an independent special investigation team (SIT) to probe the 1984 anti-Sikh riot cases, the party alleged that the Modi government set up the panel in a “tearing hurry” after the AAP’s historic win in Delhi in 2015, reported The Hindu.
Before the SIT was constituted the Delhi Assembly in June 2015 had passed a resolution terming the anti-Sikh riots as “genocide” and asked for asked the SIT to give a time-bound report on the riots.

While blaming the BJP for not doing anything at the time of the investigations, the AAP alleged that the BJP which was in power between 1998 and 2004, it “did nothing” towards ensuring a concrete probe in the matter. “What further proof of collusion is required that the retired judge appointed by the then Congress government to whitewash the 1984 probe was also appointed by the BJP government in Gujarat to probe the 2002 riots,” said the party, as reported by The Hindu.