One Medal From World Cup Stage I. Can More Of Our Archers Stand On The Podium In Stage II? 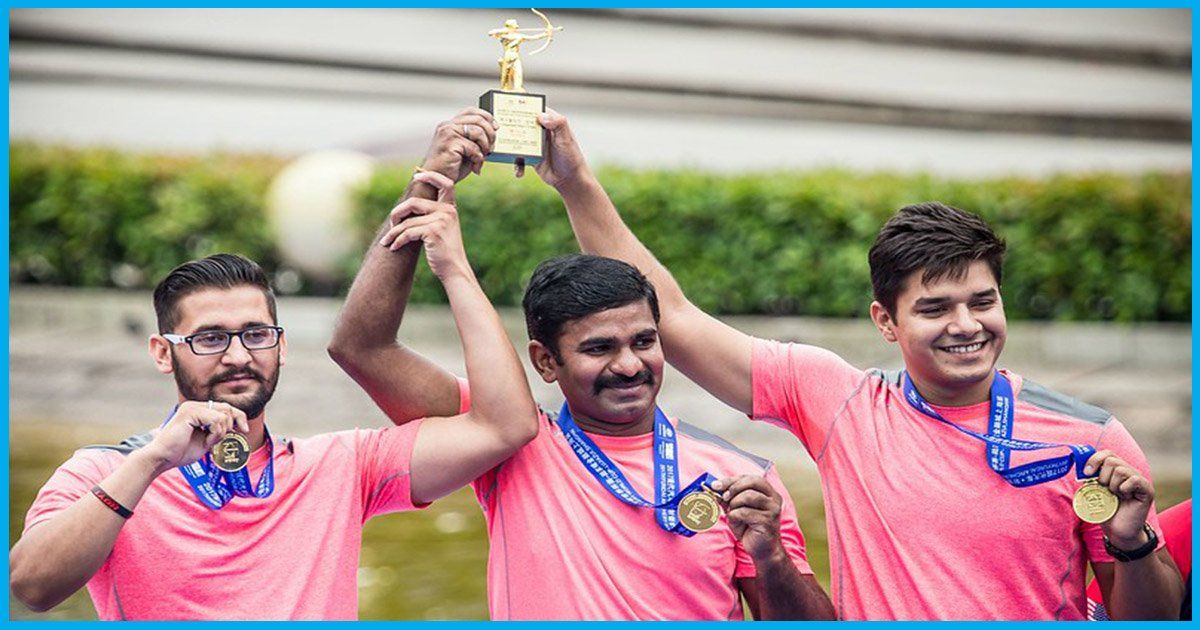 The opening leg of the four stage 2017 Archery World Cup was held in Shanghai, China last week. The Indian compound team defeated Columbia to clinch the gold in the event. Favourites Atanu Das and Deepika Kumari were wiped out in the quarterfinals itself to finish at 8th and 6th positions respectively. While the recurve archers failed to make a mark, the non-Olympian compound archers have given high hopes to the nation.

First event as a team and a huge success

Showering 10s and Xs the Indian contingent, Abhishek Verma, Chinna Raju Srither and Amanjeet Singh, overpowered the 10th seeded Columbian team Camilo Andres Cardona, Jose Carlos Ospina and Daniel Munoz 226-221. India was in the lead with 58 in the first two sets, plummeted to 52 in the third as the wind rose but secured the first gold for the nation with another 58 in the fourth set. Shooting together as a team for the first time, from defeating World Champions Iran 232-230 in the quarterfinals to number one seed USA in the semis 232-230, the trio has been impeccable.

“This is the first time we shoot together as a team,” said Verma. “Before coming here we planned every detail to make it work. We all shot well throughout week and what we really want is to create a good impression of us in front of other teams”, said Abhishek Verma to World Archery Organisation. Their focus will be to keep up the good form. “There are so many strong compound men’s team around the world and, considering the worlds in Mexico later this year, we need to keep shooting as we did here to get a good result there,” he added.

Abhishek Verma lost to Choi Yonghee of the Republic of Korea 146-149 in the fourth round of men’s individual compound event. In women’s compound category – Parveena, Jyothi Vennam, Divya Dhayal, and Snehal Mandhare departed in the very early stages and lost the quarterfinal to Denmark in the team event. In the mixed compound event, Verma and Jyothi lost the semifinals to the Republic of Korea 152-158. In the bronze medal final, they bowed down to United States of America 151-153.

Expectations were really high from the most sought after archers of the nation – Deepika Kumari and Atanu Das. However, both were knocked out of the tournament in the early stages. Having failed to steer their way into semi-finals, they returned bare handed. They put on a fairly good show – hitting 9s and 10s but have evidently failed to grab the chance at the most crucial points. Deepika Kumari has finished 8th with a total score of 659 in the women’s recurve category.

Two continuous byes to enter the third round where she defeated compatriot Preeti in 3 straight sets 6-0. The 5th seeded then beat Japan’s Sugimoto Tomomi 7-3 in 5 sets to enter the quarterfinals which she failed to clear. She lost to Japanese Hawakaya Ren 1-7 thus ending her journey. Inconsistency under pressure speaks for her early exit. “There’s a gap between silver and gold and that’s what I’m figuring out now. I need to identify and understand everything I need to win and not just remain with the silver. I want to win and become a world champion. I really want to,” said the four-time Hyundai Archery World Cup runner–up to World Archery Organisation before the kickoff. “At the moment, I’m not worried about scoring, my main focus is to develop my confidence, my technique and see what else I can continue learning”, she added while talking to World Archery. In Men’s Recurve category, Atanu, seeded sixth, too got a bye in the first two rounds. He defeated Erdal Meric Dal of Turkey in the third round 6-2 and Patrick Huston of Great Britain 6-0 in the following match.

In Men’s recurve category, Atanu, seeded sixth, too got a bye in the first two rounds. He defeated Erdal Meric Dal of Turkey in the third round 6-2 and Patrick Huston of Great Britain 6-0 in the following match. However, Atanu lost the quarterfinal against Steve Wijler by a whisker. It was a very very close match and eventually, the tie breaker 6th set, ended in favour of the Dutch hitting a 10 and Atanu scoring a 9 ended his regime at the 6th position with an overall score of 677.

Consistency is what the Indian archers need to work upon

With an arsenal of talented players out there, the competition is getting tougher. The only mantra is to be perfect… each and every time. While playing on international grounds, the weather plays a crucial role in an archer’s performance. Adapting to the weather conditions, though difficult, is yet another factor they need to master. Rigorous psychological training and regular practice should do the needful.

The players are now gearing up for the second stage of the World Cup which will take place in Antalya, Turkey. It is scheduled for 6th–11th June. We hope to see some improvement in the upcoming matches. The best seven competitors from each category at the end of the four legs will earn a chance to participate in the World Cup.