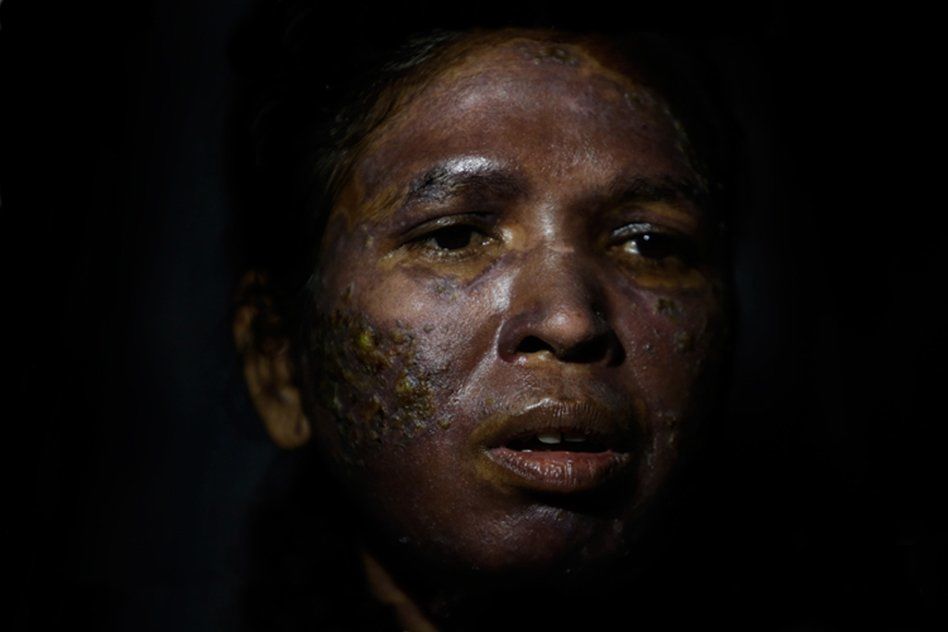 #WomensDay2016: If Bravery Has A Name, It Is Soni Sori

It’s 7 PM on a Sunday evening and hardly a minute after introducing myself, Soni Sori offers me momos out of a packet she’s helping herself to. The sight is unusual. Here is a woman, once called the greatest internal security threat, falsely implicated to be a Naxalite, one of Chhattisgarh’s only human rights defenders, a survivor of countless police brutalities and attempts to silence her, the recent one being blacking her face with a tar like substance that caused intense chemical burns and required her to be flown to the capital to be hospitalised in Apollo Hospital’s burn ward.

Today, a day after getting discharged, rising like a phoenix from the flames, with a permanently blistered hardened face, she tosses a momo into her mouth and tells me why fear has no meaning for her.

On 20 February, Soni was attacked while she and her colleague Rinki were riding an 80 kilometer ride from Chhattisgarh’s Jagdalpur back to Geedam, where they live. Three men followed them on a bike and forced them to pull over. “They seemed to be in a hurry. They held my hands behind my back and told me very clearly that they were going to blacken my face now. They told me to drop the issue of the Mardun rapes by the CRPF and my complaints against Inspector General SRP Kalluri if I wanted my daughter’s safety. They said if I didn’t stop, she would never be able to show her face and walk again,” recalls Sori.

It was several minutes later as she and Rinki rode back that she felt it wasn’t just paint they had smeared on her. Her eyes sealed shut and her face felt like it was on fire.

Where fear holds no meaning

When I met Sori, I came to know what it meant to not be afraid of anything. How can Sori not be afraid? In the face of such adversity what does it even mean?

“With stones being inserted into my private parts, with lashings, with mental torture, with constant harassment, with beating my body, with watching other people suffer, with watching women’s breasts being given electric currents, with watching 17-year-olds getting raped and giving birth to babies in jail, with being in jail for a year and half while my three children languished outside, with watching my husband getting beaten in jail so badly that he became paralysed, and watching him die finally in 2013 in jail, in watching all this, the fear just evaporated,” she says in a continuous stream of words.

When one has seen the ugly face of brutality and injustice, nothing shocks anymore, nothing perplexes, nothing is unexpected, no crime is unthinkable or too brutal to be committed. “I’ve felt my fear melt like hot metal and shape itself into a sword of strength,” she says in words that sound almost scripted, except those words are her very script that she has willed into reality.

There are several reasons why Sori says it is Inspector General (Bastar range) SRP Kalluri who is behind the attack on her. “There are a series of events that go to show he is behind my attacks. From the statements he has issued in the media against me. I incur his wrath because I question his authority and demand action against the rapes, false encounters and police brutalities that happen under his watch,” says Sori.

But what irks Kalluri is also that Sori has begun a quiet revolution. Earlier women would complain to Sori in private but when she raised their issues with the media, they would back down in fear. Today Sori is careful. “I only take up cases where the families are willing to testify for themselves to the media,” says Sori. She has been the interface between the people of Bastar and the national media, bringing the ugly truths about atrocities and abuse of law and order out in the daylight.

If I complain against the rape of tribal women by security forces, does that make me anti-national?

Does her family worry? Sori has two daughters aged 16 and 11 and a son aged 13. Her eldest wants to become a lawyer. The youngest, Sori says, is like her, “not good at studies but a fighter at heart,” she laughs.

Sori household is used to living with threats. While Sori was in the hospital her eldest daughter received a death threat saying that while Soni’s attack had a cure, her impending attack had no “ilaaj”. “My daughter laughed reading out the note to me on phone when I was in the hospital,” says Sori, evidently proud.

But moments later, when she’s less guarded she says, “I want to tell these people, fight this war with me, not with my kids”. She is evidently angry and is willing to sacrifice everything for the battle of justice. But as a mother, she is a tigress, ferociously protective.

“I am a nationalist too”

Sori is addressing JNU at the moment as this article is being written. “Look, this government is mine as much as it is every citizen’s. It is a citizen’s duty to tell its Government what’s going wrong. And we do that because we love our country. How can that mean you’re an anti-national? If I want to complain against Inspector General SRP Kalluri because it was under his watch that 40 tribal women were sexual molested by the CRPF on duty, do I become a State enemy? If I demand justice for people being falsely implicated as Naxalites and I have enough proof, am I an anti-national?” asks Sori.

Every other day the Chhattiagarh Government declares that the Naxal problem is seeing its lowest number of attacks in years. Is it true? “Every day the Naxals and the CRPF are only increasing in numbers. The people to reduce in population are the Adivasis who are being killed indiscriminately,” she says. “I want that adivasis be tried fairly. Stop false encounter killings. All political parties should come together and sit unbiased and committed to ending the Naxal problem. We need to raise beyond our political differences to ensure a safe life for Adivasis.”

Sori plans to strengthen her political base going forward. It seems that her relationship with the Aam Aadmi Party (AAP) has only solidified after her attack. Their solidarity backing her all the way and arranging for her treatment in New Delhi, which she says would have suffered in Jagdalpur, has been appreciated immensely. She looks forward to contesting in the next election. “I lost the last one because I had just been out after being imprisoned for one and half years. This had distanced me from my people. It was bad timing,” she says. Next time will be different, she assures.

I incur IG Kallur’s wrath as I question his authority and demand action against police brutalities.

She dreams to build public hospitals in Bastar, create better schools, and ensure better justice to the adivasis. One way is politics, the other is to build an institutions. “Yes, I have plans. But I don’t want the source of funds to constrain me in any way. The donations that come my way must not bind me in any way in fighting for the rights of people. Because I am born of this struggle. It is my very identity and I won’t allow money to dilute it in any way,” she says cautiously.

When Sori is asked for a message on women’s day she says, “On this Women’s day even though its 2016, women are not safe. Women are raped, attacked, beaten, thrown acid on, where are we safe? Women live in so much fear. No matter what crimes women are accused of I want to say that we have the right to dignity and to be tried fairly. We need to pledge to create an atmosphere so that the most deprived woman is allowed to progress,” she says.

When Sori returns to Jagdalpur on Tuesday, she will be born yet again as she has been countless times. And this time too, she will be given a roaring welcome. For the women of Bastar, having her back is the most reassuring Women’s Day celebration they can ask for.