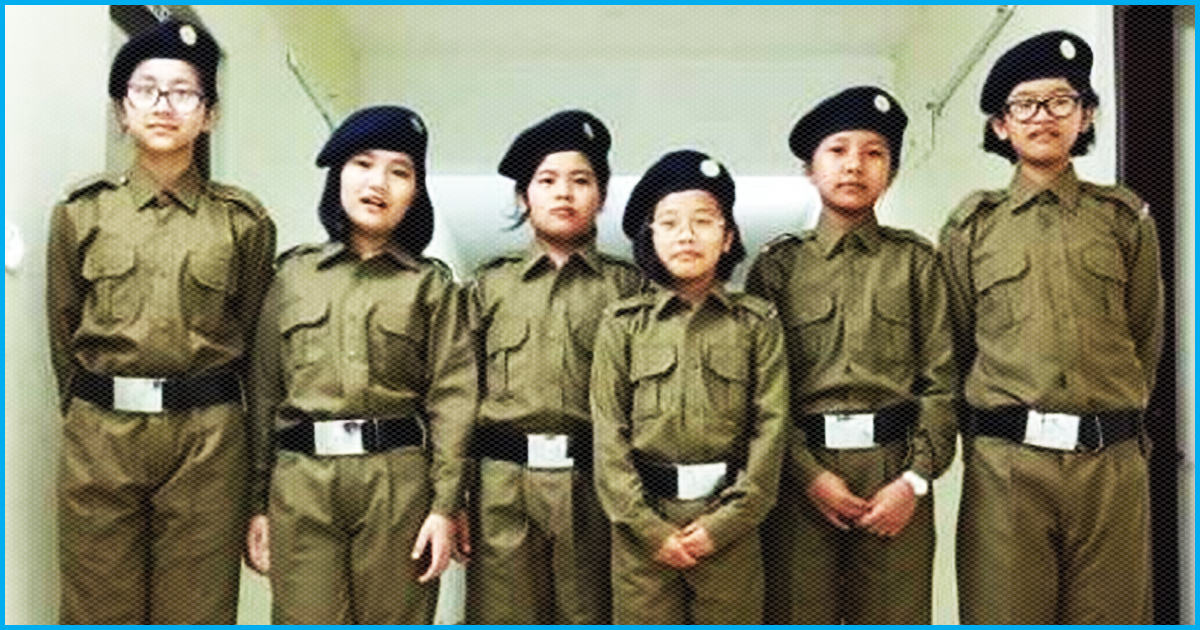 History In The Making: Mizoram Sainik School Gets Its First Batch Of Girl Cadets

India got Independence in 1947, however, it was only in 1992 when the Defence Services started having women officers. Although women were mostly included in supporting arms like education, engineering, medicine. Another major breakthrough came in 2016 when the Indian Air Force (IAF) inducted three women fighter pilots in 2016. Until then, this was entirely a male-bastion.

We are living in an exciting time when women in India are making their mark in every possible profession and are excelling in them. There are a bare minimum number of women in IAF. It wasn’t that the little girls while growing up never imagined becoming pilots or serving as defence officers, of course, they did. However, these young dreamers were always told that being in the Army is a man’s job. But this would not be the same for girls in Mizoram any more. As the Sainik school in Mizoram’s Chhingchhip has made a historic change in their admission procedure. The strict all-boys school is now “co-educational residential English medium School”.

In 1961, VK Krishna Menon, the former Defence Minister of India had set up a Sainik school in India for preparing boys from an early age for entry into coveted defence institutions like National Defence Academy (NDA), Pune and Indian Naval Academy. The first school was established in Satara, Maharashtra by the Central government. Since then 28 Sainik schools have been opened in the country run by Sainik School Society under the Defence Ministry. All the school were an all-boys school until some time back. Earlier this year, the Lucknow Sainik school, which is the only Sainik school run by state government opened its gates for the girls, after 58 years of opening in 1960, as reported by The Indian Express. In April this year, 17 girls got enrolled in the Lucknow school in class 9.

This year Sainik school in Chhingchhip got selected as a pilot school to include girls into Sainik Schools. Last year in August the Chhingchhip school received a letter from the government asking them to reserve 10% of the total seats for only the girls. The Chhingchhip school that was established in May 2017, marked the entry of women in their school.

“For us, 10 per cent of the total class strength meant six girls. Since we were a new school, we had only two batches: Class 6 (with 60 students) and Class 7 (100 students). Imagine six girls among 154 boys!,” said Lt Colonel Inderjeet Singh, who was the principal of the Chhingchhip school at the time when the school received the notification.

Soon the school started to put out advertisements and made many announcements over loudspeakers, and within weeks, the schools received applications from 31 girls. Many parents began to send letters asking for admissions procedures and queries on how their ward can get admission in the school.

In January this year, the 31 girls applicants sat for entrance exams with the boys at three locations-Aizawal, Lunglei and Chhingchhip. All the applicants were tested on mathematics, general knowledge, language and intelligence and of the total, 21 girls made to the interview round. The Colonel said that the, in the end, the six girls were picked. He also said that they (administration) knew that it was history in the making.

Among the six- one is from Chhingchhip, one from the Chakma Autonomous District Council (CADC) and the four are from Aizawl. The first girls batch joined the school on June 4. One of the girls, Zonunpuii said that with the kind of welcome they received and the photos that were clicked made them understand how big it was for them to be part of the school.

Colonel Singh had both- a sense of pride and responsibility in his eyes. He said that in the coming months the school beefed up the school security considering the entry of new members into the school. Also, several meetings were held with the seven- members faculty team that include five men and two women to discuss many things.

The school has a 212-acre campus comprising of five building. The smallest one was allocated to the girls. The Colonel said that they readied the indoors, set up the gaming room and also increase the security of the girl’s hostel. He also said that in addition to that the school soon would be installing CCTV cameras near the hostel promises, to ensure safety measures.

The entry of girls in the school is not new for just the six girls but also for the already studying boys in the school. While some were baffled to see this change, there were others who spontaneously welcomed their new schoolmates.

A Class 7 boy, Lalruatkima, said that they knew it beforehand that the girls were joining. He added they were unable to disguise their shock. “They came during our tea break… The only girls we were used to seeing were our teachers. It was odd,” he said.

It has been almost four months, and now the girls have adjusted to their new routine. All of them start their day with their 5:30 am PT drill, post which they attend their classes and eventually end their school routine at 7 pm almost every day. The school follows a curriculum affiliated to the CBSE. Zirsangpuii, who teaches English, says, that the girls are coping really well and are also equally participating.

While talking to The Indian Express, Sunil Pathak, who teaches Social Studies at the School said, “When I met other teachers at workshops in Delhi, they would say, ‘Girls Sainik School mein aane se bohot zyada ho jayega (Girls coming in would be too much)’,” says Pathak, adding they were worried about losing “control”. “They would say why not make a separate school for the girls. But the Northeast mindset is different. Also, this is the only school where the villagers donated land to the government for the school.”

Colonel Singh says that they have no aim to keep the boys and girls reclusive of each other. “We saw no reason to separate them in sports or class. There is an opportunity for them to talk, interact etc. If you cordon them off, what is the use? The point is to prove that girls and boys are equal,” he added.

In some years these six girls will be making history, and with them, many other little girls would be able to dream the same. With this progressive step in the Sainik school now the girls can get the same education and training as their male counterparts that are required to be National Defence Academy (NDA).

Also Read: The First Woman In The History Of Indian Army To Bag The Coveted Sword Of Honour