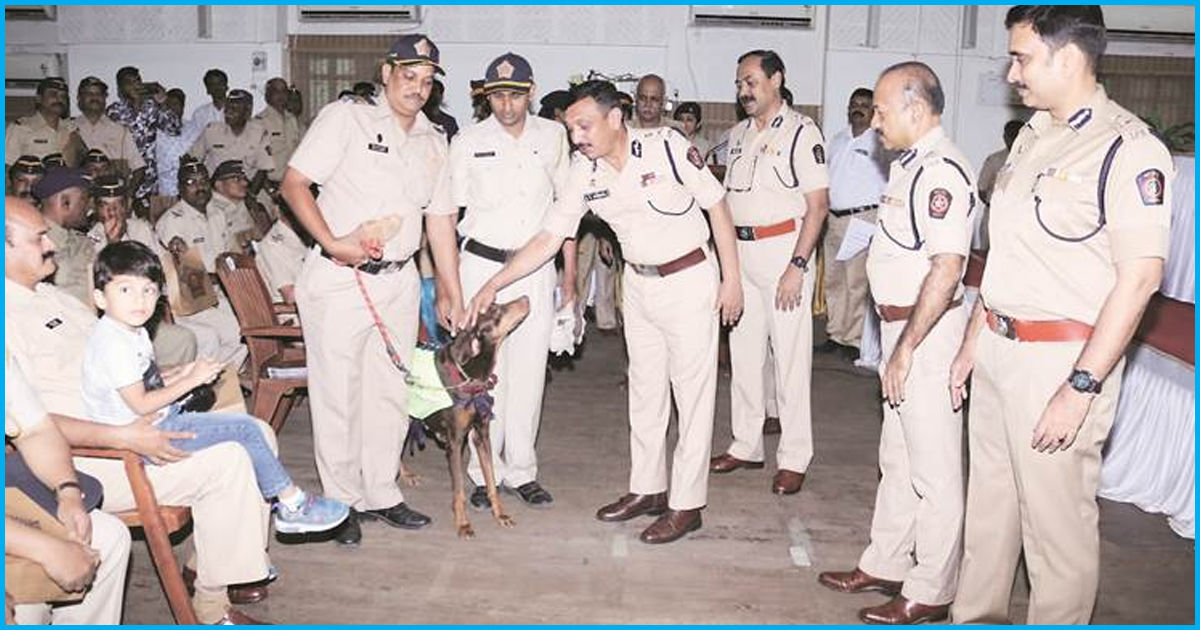 On October 31, the Mumbai Police had a rather unusual farewell ceremony at the Azad Maidan Police Club. With shawls wrapped and kind words from the commissioner, the Mumbai police force bid an emotional farewell to police dogs, Heena and Vicky who retired after working for 10 years in the force.

Both Vicky and Heena were detective dogs and they received the same farewell as their human counterparts. They were wrapped in a shawl and their handlers were given a coconut and memento. Commissioner Subodh Kumar Jaiswal commemorated the ceremony with kind words.

What makes it even more special is that Vicky and Heena can live in the kennels that they grew up in. They need not find a new home via adoption. “In the past, when we have given police dogs up for adoption, the persons who adopted them would complain that the dogs were just not used to being with anyone else,” said Sub-Inspector Vinod Ballal, who took over as head of the Mumbai Police Crime Branch’s Dog Squad three months ago, reported The Indian Express.

For tracking purposes, the police prefer Doberman Pinschers. Unlike Labradors, they are quick and have a distinctive sense of smell. Just like other pups, Heena joined the force when she was 2 months old and was packed up for a nine-month training with her trainer, Head Constable Umesh Sapte.

From the beginning, Heena became the go-to canine for catching murder suspects. She was instrumental in catching a murder suspect in Dharavi in 2013 and earlier this year in Khar, she also sniffed out a hidden passage which had led to the escape of a domestic help and her boyfriend after killing her employer in a high rise. She has also helped in catching a rapist which subsequently led to his life imprisonment.

Of the 568 crimes where the dog squad had provided assistance between 2014 and 2017, they have helped trace the direction taken by perpetrators in 403 cases, while in four cases, they have tracked down the home or place of work of the accused.

Full Guard of Honour at funeral

Earlier this year in January, Tiger was given the traditional guard of honour and was wrapped in the tricolour on the day of his funeral. Tiger was the best police dog of Uttar Pradesh and had reportedly solved 150 cases.

He was in the force since he was 11-month-old. The Canine Club of India, that provides dogs to the police and paramilitary forces across the country, gave tiger to Uttar Pradesh police in 2003.

Tiger, Heena, Vicky are just three names in the long list of canines who have served in the police and armed forces. Extremely loyal and capable, these dogs venture into places where humans cannot go. Their intelligence and fearlessness are often lauded, so is their selfless service. The Logical Indian applauds the police’s efforts to appreciate their furry friends.

Also Read: A Software Engineer And A “Dog Father”, This Man From Bengaluru Takes Care Of 740 Dogs