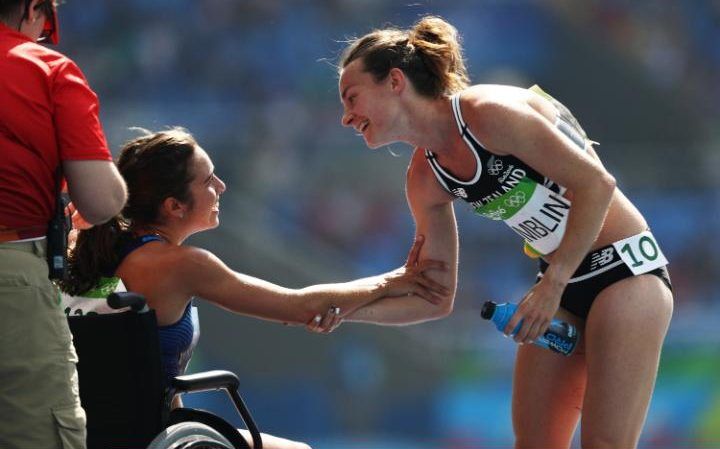 On Her Crusing Olympic Dream, She Stops To Help Her Collapsed Rival

A spirit of true sportsmanship was witnessed at the Rio Olympic when a 5,000-metre runner stopped mid-race to help a fallen athlete. On 17 August 2016 at an event of 5,000-metre run, New Zealand’s Nikki Hamblin fell down and accidentally tripped up Abbey D’Agostino of the United States.

D’Agostino got back to her feet but refused to continue the race and helped fallen Hamblin. She sacrificed her race to help the prone New Zealander. 24-year-old D’Agostino seemed to have hurt her right knee in the collision. She limped over the line and took wheelchair later.

As per the telegraph reports, Hamblin thanked the American after the race, saying: “That girl is the Olympic spirit right there. I went down and I was like ‘what’s happening? Why am I on the ground?’
“Then suddenly this hand on my shoulder, like ‘get up, get up, we have to finish this’ and I was like, ‘yep, you’re right’. This is the Olympic Games – we have to finish this.

“I’ve never met this girl before, and isn’t that just so amazing, such an amazing woman.”

“Regardless of the race and the result on the board, that’s a moment that you’re never ever going to forget for the rest of your life, that girl shaking my shoulder, like ‘Come on, get up’.”

“I really hope she’s okay. And I know that she’s young and she’s going to have so many more opportunities. And being such a good human being, she’s going to go so far.”

Four years of hard training, and the dream run of the semi-final of 5000 m, yet D’Agostino stops to help fallen rival. The Logical Indian applauds the pair for living the true spirit of sportsmanship and Olympic.