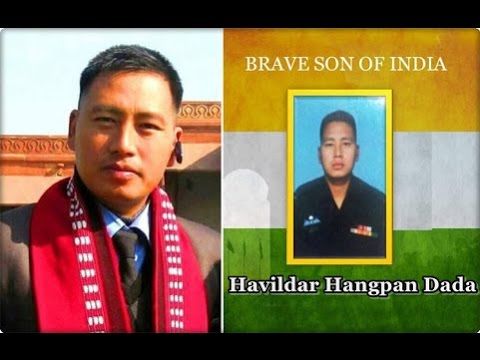 The award for Dada’s sacrifice and valour was accepted by his widow Chasen Lowan, who barely managed to control her tears while receiving the honour.

Dada’s Bravado
On 26 May 2016, Dada, posted as commander of 35 Rashtriya Rifles (RR), had received orders from his commanding officer to restrict four infiltrators who had crossed the PoK at 12,500 feet in Naugam. After finding out the whereabouts of the infiltrators, Dada with his team, engaged in a fierce gunfight with them. He fought valiantly and shot two of the terrorists. During this time, the other two fled and hid behind some boulders.

Dada was determined to bring down all the terrorists and so went in search of the other two. He found one of them, pounced on him and engaged in hand-to-hand combat. He dragged the terrorist, rolled him down and finally was able to kill him at close quarters.

In the meanwhile, the fourth terrorist who was seeing this fight from a different location started shooting at Dada. Injured, and bleeding, Dada still didn’t stop. He had to take all of them down and safeguard the country. Still wounded, he pinned down the fourth man and injured him. The terrorist eventually died. But, due to the bullet wounds, Dada also passed away before he could call for help. He wrestled life and death while also fighting with the foes.

Displaying exceptional courage and presence of mind, Dada embraced martyrdom like a hero. The life of Havildar Hangpan Dada
Born in 1979 in the remote village of Borduria in Tirap district of Arunachal Pradesh, Havildar Hangpan Dada worked hard to be a soldier in the Assam Regiment of the Indian Army. He had joined the 3rd battalion of the Parachute Regiment on October 28, 1997. In 2005, he was transferred to the Assam Regimental Centre, and from there, he went on to join the 4th battalion of Assam Regiment in January 2008. He had also served with the contingent at Barrackpore (West Bengal), Kargil, Lucknow and Multuk (Manipur). Later, he had requested a transfer to an RR battalion to be engaged in Jammu & Kashmir operations. Dada was posted with the 35 Rashtriya Rifles; a force carved out for counter-insurgency operations, where he died a martyr’s death.

The Logical Indian salutes the late Havildar Hangpan Dada for displaying grit, courage and integrity in fighting for his country.