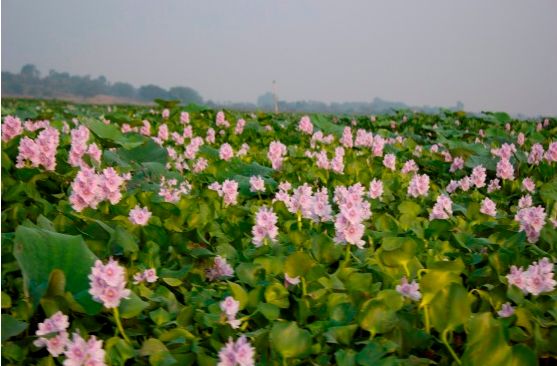 The largest freshwater lake of Odisha, Ansupa had lost its past glory and tourist potential due to the negligence of the State Government. The lake that is spread around 380 acres had dried up and was filled with weeds, filth and silt. Situated under Banki Sub-Division on the left of Mahanadi river, the horse shoe-shaped lake holds a prominent position in the tourism industry of Odisha. Its rich diversity includes some rare plant species and herbs. The home to 27 species and 14 types of migratory birds has lost its charm over the years. Years ago, the weeds in the lake would get cleared when the flood water would enter it through Mayuri Nala but after the embankment of Mahanadi was raised, the de-weeding process stopped. The water that enters the lake cannot be discharged as the passage has been choked by silt.

The women living close to this lake would earn income from boating, but ever since the freshwater lake depleted, their income has dwindled.

These women came in touch with Goonj, a Delhi-based NGO and started cleaning the weeds from the lake to start boating errands again. Goonj decided to take this matter further as a part of their nationwide Cloth for Work (CFW) initiative. Under this initiative, every year village community across India takes up more than 2500 activities like developing small irrigation canals, digging up wells, building huge bamboo bridges and developing small irrigation canals, drainage systems and also village schools. These women also identified the work of cleaning the weeds in their lake and received material for their work. Speaking to The Logical Indian, the co-founder of Goonj, Meenakshi Gupta says, “Our initiative helped the women by providing them with material inputs. Each participating woman received a comprehensive family kit, and we empowered them to solve the problems with their efforts. We also provided them tent house, tarpaulins which helped the local women’s Self-Help Groups for the income generation activities. Thirty women worked ten days to clean weeds from 2000 sq ft area of Lake. They pay 25 percent of the income generated, to the government for the repair and maintenance of the boats.Two tonnes of weeds was extracted and was used as compost for the crops.” The Logical Indian appreciates the efforts of the women and Goonj who helped them take this initiative further. We request the Government to develop eco-tourism spots that will help those people whose livelihood is dependent on such areas.