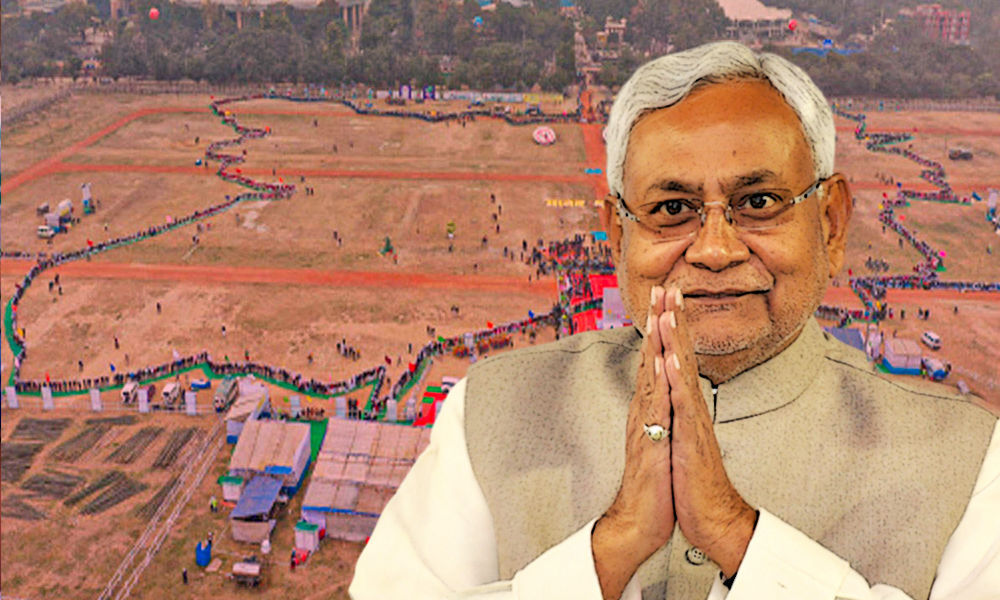 Over 5 crore people from across the state joined hands to form a "maanav shrinkhla" (human chain) resembling the map of Bihar.

Over 5 crore people from across the state joined hands to form a "maanav shrinkhla" (human chain) resembling the map of Bihar. The event was to bring attention to environmental conservation and fighting social issues like child marriage, dowry and consumption of alcohol in the state.

CM Nitish Kumar, along with Deputy CM Sushil Kumar Modi, the cabinet ministers, and certain government officials participated in an 18,034 km human chain to make people aware of climate change, social ills such as dowry and child marriage. The event took place at Gandhi Maidan from 11:30 am to noon.

Commenting on the huge turnout, Kumar said it is an unparallel show of people's support to the state government's initiative to protect the environment.

Later, Kumar in a series of tweets stressed that this human chain will be another milestone in creating awareness about environmental conservation and social reform campaigns.

Chief Secretary Deepak Kumar, while speaking to the reporters, informed about the state's human chains that were formed in the earlier years. He also added that a total of seven helicopters had been engaged into service for capturing aerial images of the event and more than 100 drone cameras have clicked photographs of the human chain.

While addressing the media, Singh praised the efforts of the Bihar government and the 'Jal Jeevan Hariyali' campaign and said, "If India can dream of becoming Vishwa Guru, one of the reasons is our age-old tradition of respecting nature. No praise is too high for Nitish Kumar's thrust on environment conservation."

Opposition parties sprang up to the opportunity to criticize the event, calling it an "extreme waste of public money and government resources."

Rashtriya Janata Dal leader Tejashwi Yadav slammed the Nitish Kumar's government on the sorry-state of employment in the state. He further questioned Kumar's decision to spend crores of rupees to hire helicopters for the human chain event coverage but no heed was paid when floods ravaged the state.

Tejashwi Yadav's elder brother Tej Pratap Yadav also lashed at the government saying the opposition would have appreciated the efforts had the CM organized a rozgar shrinkhla (employment chain) for providing jobs to unemployed youth instead of the manav shrinkhla ( human chain).