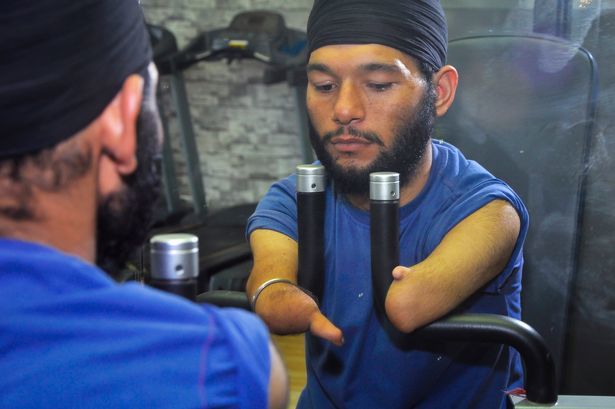 Meet Jagwinder Singh, 24, an Armless art teacher who uses his feet to paint is striving for Paralympic glory after showing cycling flair.Being the cycling enthusiast, he was inspired to buy his own bike after watching the 2012 Olympics on television and started strolling down the streets in his native town of Patran in Punjab all by himself.

It didn’t took him days before he started cycling to nearby Patiala – a distance of 25 km that’s too three times a week, adding to his parents surprise . Gradually, with aid of his friends and family, he began competing and now he is suited up for much awaited Olympics. Driven by a burning desire to become an inspiration and not a victim of fate, He says he’s glad to be a source of inspiration for his community. Having no arms, he uses his feet to cook and eat his food, paint, and even work on his computer. “The people who see me every day, their mindset becomes very positive, thinking ‘If he can do so much in spite of not having hands then we can do anything.’” This is one of my biggest achievements for Jagwinder Singh His father said: “When he started going to school, at first there were many difficulties – like how he will be treated by the other kids, being handicapped.”But he never lost his spirit, we supported him fully.” his proud father added. And with the success of his cycling and his teaching, the only worry family has is to find him a suitable bride.

Jagwinder’s mother Amarjeet Kaur, 45, said: “We need a good girl for him, who will support him and live her whole life with him properly. “As we hope for good for him, she should wish the same.” But the king (Singh) has different aspirations from life and despite his parents’ attempts at matchmaking, he intends to stay focused on his cycling – training hard both at the gym and by cycling over 25km every day. Not disheartened with his limits, Singh says“Whenever I feel like doing some work I see how another person is doing this work and work out how can I do it my own way”. He also added : “My favorite cyclist is the Canadian Joseph Veloce – he is my biggest inspiration. Likewise I wish to win a gold medal in the Olympics. “I want to make my parents and my country proud with my cycling” This Multi-Talented Armless Man Shows How You Can Achieve Greatness Even With A Disability! He is certainly not dis-abled, but differently -abled. Anyone can come out from the sea of hopelessness by seeing such a person of hope and will. Logical Indians community applauds such a strong character and wish him all luck for future wholeheartedly.