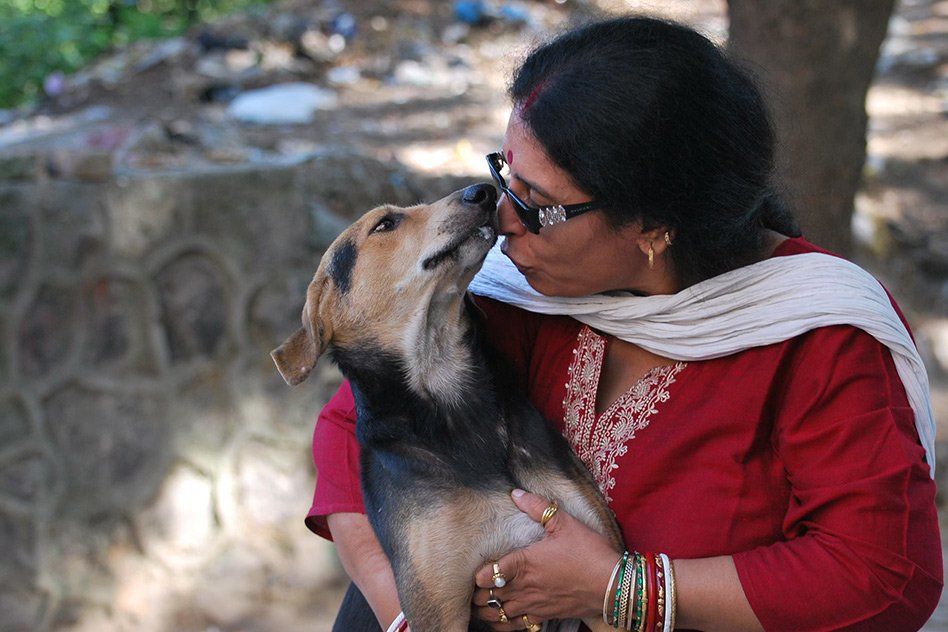 A Selfless Mother, Who Is Feeding Over 400 Stray Dogs Everyday For The Past 15 Years

Sulakshmi Das Gupta, a sixty-year-old woman, is much more than a best friend to dogs. She almost assumes the role of a caring, nourishing mother in the lives of the ignored street dogs on the roads of Delhi. She has saved so many dogs from starvation by feeding them and providing them the one thing that every living thing needs -love and comfort.

Providing for her huge family of stray dogs

Sulakshmi Das Gupta along with her husband Pinaki Das Gupta has embraced and cared for over 400 street dogs everyday during the past 15 years. She was a customary pet-lover, like so many of us are, but she did not stop at just loving her own dogs. On a daily basis, she cooks over 250 kilos of rice, boiled vegetables and meat after which she along with three volunteers drive across the major localities of Delhi to personally feed over 400 dogs. The stray dogs are served on disposable eco-friendly plates and bowls which are discarded neatly after the meals. Sulakshmi keeps track of all these dogs that depend on her and has even named each one of them. She also tries to give them shelter and medical care by pleading with the vets all around the city.

How she began improving lives of dogs beyond her walls

About fifteen years ago, she and her husband raised three dogs as their pets in their house in C.R.Park, New Delhi. But her love for dogs did not end at the walls of her home. Her love and compassion for these animals made her feed the stray dogs around their house as well. The number of dogs in her house kept increasing as the years rolled by. For Sulakshmi, the work she does is something that she cannot entrust to anybody else. She is so passionate about the lives of these dogs that she does not believe a helper would be able to do justice to them. But she is thankful to her husband for standing by her financially as well as psychologically.

While giving a better life to these shunned animals of the society, she has faced serious criticism because of attacks by stray dogs and their uncontrollable multiplication. But at the same time, many animal lovers have appreciated and Sulakshmi’s efforts towards the community of stray dogs.

In order to reach out to more animals, she has set up the Swargasaathi Charitable Trust and is on the lookout for people who would genuinely love to help the cause. The trust is open to charities. For information you can write an email to [email protected] or contact them at +91-9910576883.

One of the most selfless acts is to be able to care for another being without expecting anything in return. Sulakshmi has catered to the needs of so many dogs over the years and continues to do so with unimaginable enthusiasm and interest. The Logical Indian thanks her for her service to the dog community and also respects her for standing up for her loved ones when in the face of opposition from the people around her.