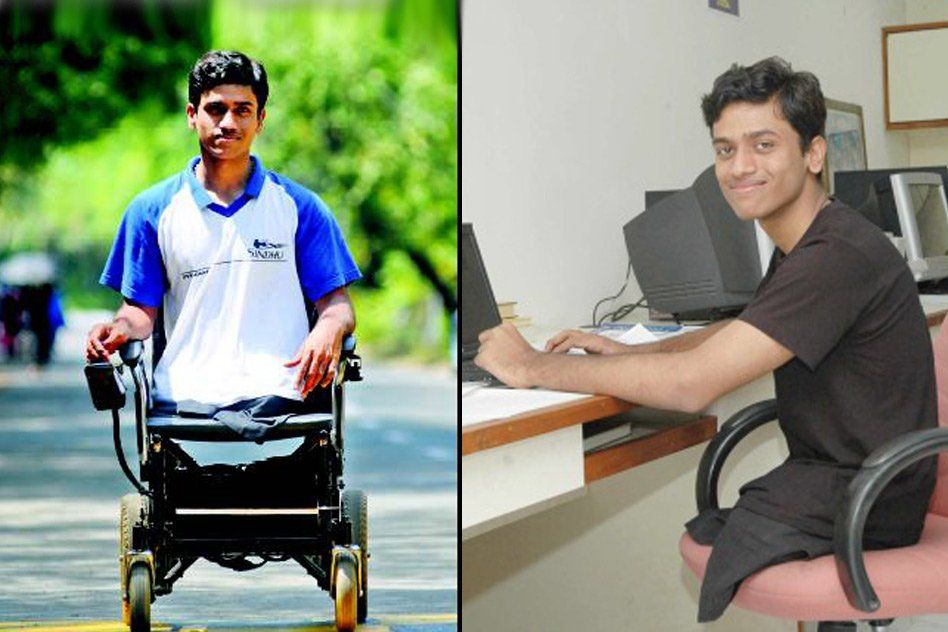 See article by The Logical Indian
Naga Naresh Karutura has passed out of IIT Madras in Computer Science and has joined Google in Bangalore. You may ask, what’s so special about this guy when there are hundreds of students passing from various IITs and joining big companies like Google?
Naresh is special. His parents are illiterate. He has no legs and moves around in his powered wheel chair.Ever smiling, optimistic an d full of spirit; that is Naresh. He says, “God has always been planning things for me. That is why I feel I am lucky.” Read why Naresh feels he is lucky. I spent the first seven years of my life in Teeparru, a small village in Andhra Pradesh, on the banks of the river Godavari . My father Prasad was a lorry driver and my mother Kumari, a house wife. Though they were illiterate, my parents instilled in me and my elder sister (Sirisha) the importance of studying.
Looking back, one thing that surprises me now is the way my father taught me when I was in the 1st and 2nd standards. My father would ask me questions from the text book, and I would answer them. At that time, I didn’t know he could not read or write but to make me happy, he helped me in my studies!
Another memory that doesn’t go away is the floods in the village and how I was carried on top of a buffalo by my uncle. I also remember plucking fruits from a tree that was full of thorns.
I used to be very naughty, running around and playing all the time with my friends.. I used to get a lot of scolding for disturbing the elders who slept in the afternoon. The moment they started scolding, I would run away to the fields!
I also remember finishing my school work fast in class and sleeping on the teacher’s lap!

On the January 11, 1993 when we had the sankranti holidays, my mother took my sister and me to a nearby village for a family function. From there we were to go with our grandmother to our native place. But my grandmother did not come there. As there were no buses that day, my mother took a lift in my father’s friend’s lorry. As there were many people in the lorry, he made me sit next to him, close to the door.
It was my fault; I fiddled with the door latch and it opened wide throwing me out. As I fell, my legs got cut by the iron rods protruding from the lorry. Nothing happened to me except scratches on my legs.
The accident had happened just in front of a big private hospital but they refused to treat me saying it was an accident case. Then a police constable who was passing by took us to a government hospital.
First I underwent an operation as my small intestine got twisted. The doctors also bandaged my legs. I was there for a week. When the doctors found that gangrene had developed and it had reached up to my knees, they asked my father to take me to a district hospital. There, the doctors scolded my parents a lot for neglecting the wounds and allowing the gangrene to develop. But what could my ignorant parents do?
In no time, both my legs were amputated up to the hips.
I remember waking up and asking my mother, where are my legs? I also remember that my mother cried when I asked the question. I was in the hospital for three months.

I don’t think my life changed dramatically after I lost both my legs. Because all at home were doting on me, I was enjoying all the attention rather than pitying myself. I was happy that I got a lot of fruits and biscuits.
‘I never wallowed in self-pity’
The day I reached my village, my house was flooded with curious people; all of them wanted to know how a boy without legs looked. But I was not bothered; I was happy to see so many of them coming to see me, especially my friends!
All my friends saw to it that I was part of all the games they played; they carried me everywhere.
God’s hand. I believe in God. I believe in destiny. I feel he plans everything for you. If not for the accident, we would not have moved from the village to Tanuku, a town. There I joined a missionary school, and my father built a house next to the school. Till the tenth standard, I studied in that school.
If I had continued in Teeparu, I may not have studied after the 10th. I may have started working as a farmer or someone like that after my studies. I am sure God had other plans for me.

When the school was about to reopen, my parents moved from Teeparu to Tanuku, a town, and admitted both of us in a Missionary school. They decided to put my sister also in the same class though she is two years older. They thought she could take care of me if both of us were in the same class. My sister never complained.
She would be there for everything. Many of my friends used to tell me, you are so lucky to have such a loving sister. There are many who do not care for their siblings.
She carried me in the school for a few years and after a while, my friends took over the task. When I got the tricycle, my sister used to push me around in the school.
My life, I would say, was normal, as everyone treated me like a normal kid. I never wallowed in self-pity. I was a happy boy and competed with others to be on top and the others also looked at me as a competitor.

I was inspired by two people when in school; my Maths teacher Pramod Lal who encouraged me to participate in various local talent tests, and a brilliant boy called Chowdhary, who was my senior.
When I came to know that he had joined Gowtham Junior College to prepare for IIT-JEE, it became my dream too. I was school first in 10th scoring 542/600.
Because I topped in the state exams, Gowtham Junior College waived the fee for me. Pramod Sir’s recommendation also helped. The fee was around Rs 50,000 per year, which my parents could never afford.

Living in a residential school was a big change for me because till then my life centred around home and school and I had my parents and sister to take care of all my needs. It was the first time that I was interacting with society. It took one year for me to adjust to the new life.
There, my inspiration was a boy called K K S Bhaskar who was in the top 10 in IIT-JEE exams. He used to come to our school to encourage us. Though my parents didn’t know anything about Gowtham Junior School or IIT, they always saw to it that I was encouraged in whatever I wanted to do.. If the results were good, they would praise me to the skies and if bad, they would try to see something good in that. They did not want me to feel bad. They are such wonderful supportive parents.

Though my overall rank in the IIT-JEE was not that great (992), I was 4th in the physically handicapped category. So, I joined IIT, Madras to study Computer Science.
Here, my role model was Karthik who was also my senior in school. I looked up to him during my years at IIT- Madras. He had asked for attached bathrooms for those with special needs before I came here itself. So, when I came here, the room had attached bath. He used to help me and guide me a lot when I was here.
I evolved as a person in these four years, both academically and personally. It has been a great experience studying here. The people I was interacting with were so brilliant that I felt privileged to sit along with them in the class. Just by speaking to my lab mates, I gained a lot..
‘There are more good people in society than bad ones’

Words are inadequate to express my gratitude to Prof Pandurangan and all my lab mates; all were simply great. I was sent to Boston along with four others for our internship by Prof Pandurangan. It was a great experience.

I did not want to pursue PhD as I wanted my parents to take rest now. Morgan Stanley selected me first but I preferred Google because I wanted to work in pure computer science, algorithms and game theory.
I am lucky. Do you know why I say I am lucky?
I get help from total strangers without me asking for it. Once after my second year at IIT, I with some of my friends was travelling in a train for a conference. We met a kind gentleman called Sundar in the train, and he has been taking care of my hostel fees from then on.
I have to mention about Jaipur foot. I had Jaipur foot when I was in 3rd standard. After two years, I stopped using them. As I had almost no stems on my legs, it was very tough to tie them to the body. I found walking with Jaipur foot very, very slow. Sitting also was a problem. I found my tricycle faster because I am one guy who wants to do things faster.
One great thing about the hospital is, they don’t think their role ends by just fixing the Jaipur foot; they arrange for livelihood for all. They asked me what help I needed from them. I told them at that time, if I got into an IIT, I needed financial help from them. So, from the day I joined IIT, Madras , my fees were taken care of by them. So, my education at the IIT was never a burden on my parents and they could take care of my sister’s Nursing studies.

After my first year, when I went home, two things happened here at the Institute without my knowledge.
I got a letter from my department that they had arranged a lift and ramps at the department for me. It also said that if I came a bit early and checked whether it met with my requirements, it would be good.
Second surprise was, the Dean, Prof Idichandy and the Students General Secretary, Prasad had located a place that sold powered wheel chairs. The cost was Rs 55,000. What they did was, they did not buy the wheel chair; they gave me the money so that the wheel chair belonged to me and not the institute. My life changed after that. I felt free and independent. That’s why I say I am lucky. God has planned things for me and takes care of me at every step.

The world is full of good people.