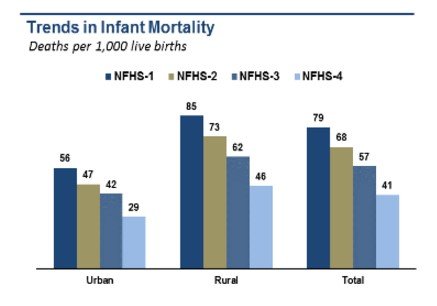 Uttar Pradesh has shown poor performance in infant and under-five mortality rate compared to that of Madhya Pradesh and Chhattisgarh, according to the newly-released National Family Health Survey (NFHS-4) of 2015-16.

Despite an improvement in the state’s Infant Mortality Rate (IMR) over the last decade – 73 deaths per 1,000 live births to 64, UP is trailing behind other states and countries in the world. The condition is worse than the strife-torn African nations and slightly better than Afghanistan (66).

The infant mortality rate (IMR) is the number of deaths of infants under one-year old per 1,000 live births. This rate is often used as an indicator of the level of health in a country.

The Under-five mortality rate is the probability of dying between birth and exactly five years of age, expressed per 1,000 live births.

The Indian government spends Rs 646 on per capita health on an average, while Uttar Pradesh, the most populous state in the country, spends 70 per cent less (Rs 452) than the Indian average.

The NFHS-4 data shows that currently, UP also has India’s worst under-five mortality (U5MR) of 78 deaths per 1,000 live births, which is comparable to that of Mozambique (79), an African nation with half of India’s GDP per capita.

One in two children in the state is not fully immunised, and the state has the country’s second-highest maternal mortality rate (258 deaths per 100,000 live births). The data reveals a poor performance of Madhya Pradesh as well. At least 64 children below the age of six died every day last year in the BJP-ruled state.

As reported by the Outlook, MP’s Minister for Women and Child Development, Archana Chitnis, claimed that no death was reported in the state due to malnutrition during 2015 and 2016.

However, the MP government was forced to come up with the revised figure after former chief minister Babulal Gaur accused the state government of providing misleading information on malnourished children in Sheopur district, to the State Assembly.

The NFHS survey further highlights the crippling state of Chhattisgarh – IMR 54 and U5MR 64. Though the figures have improved over the last 10 years, further improvement is required.

Rich states like Delhi and Gujarat also show unreasonably high IMR, highlighting the urgency for both union and state government to improve the country’s health indices.

However, not all states have performed poorly. The five best-performing states for infant mortality rates are Kerala, Goa, Tamil Nadu, Manipur and Arunachal Pradesh which have IMRs comparable to the United States, Iran, Algeria, Philippines and Indonesia.

The five best-performing states for under-five mortality rates are Kerala, Goa, Manipur, Tamil Nadu and Maharashtra which have U5MR at par with the United States, Iraq, Indonesia, Azerbaijan and Brazil.