Good To Know: Here Is How You Can Claim A Full Refund Of A ‘Mutilated Currency Note’ Most of us have mutilated currency notes which cannot be used for transactions since businesses wouldn’t accept mutilated notes. The Reserve Bank of India (RBI) has detailed rules in this regard that lay down conditions for exchange of such mutilated notes. One can get a full or half refund of the value of the mutilated note based on the condition of the note. Here is a detailed guide of the rules.

What type of notes will be accepted?

As per Reserve Bank of India (Note Refund) Rules, 2009, the following type of notes will be considered for the refund.

What is the process of refund?

Such notes will be accepted only at the issue offices of RBI and at all the currency chest branches of various banks. The list of currency chest branches of various banks can be accessed from the RBI website. In all these branches, the mutilated notes will be accepted over the counter and a paper token in form DN-1 will be issued to the person submitting the notes. The refund value & criteria are different for different denominations.

For Currency notes of denomination more than Rs 50: In the case of notes of the higher denomination (Rs 50 & above), there are multiple criteria as listed below. The RBI has recently amended the rules to increase the area of the undivided piece required for the full refund from more than 65% to more than 80%.

The dimensions of the new notes and the respective area required for full & half refund are given in the table below. 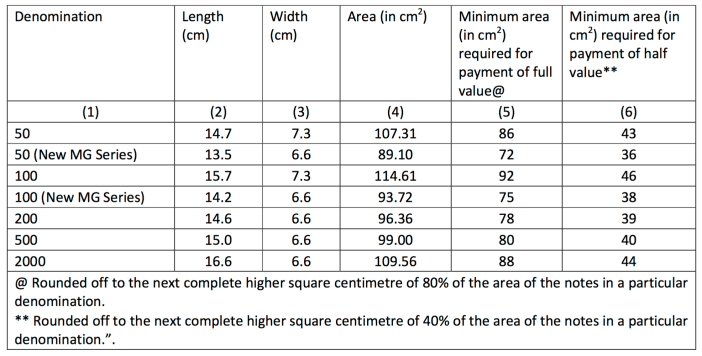 What about Mismatched & Imperfect notes?

When will the refund be made?

As per the rules, the process is to be completed in minimum possible time and in any case on the same day. In addition, the value of such notes should be credited to the account through ECS or paid by way of Banker Cheque or Demand Drafts.

What about Soiled notes?

In the case of soiled notes, all bank branches should accept such notes and pay full value.