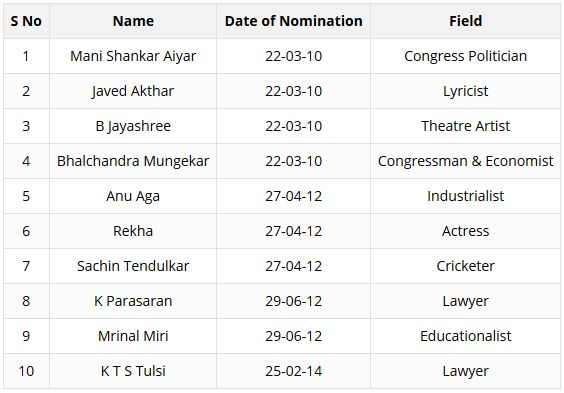 How Are The Nominated Members Of The Rajya Sabha Performing?

The Rajya Sabha or the Upper House has 12 nominated members. These members are nominated by the President on the advice of the government of the day. Article 80(3) of the constitution of India authorizes the President of India to nominate a maximum of 12 members to the Rajya Sabha and the members nominated shall have special knowledge or practical experience in the fields of Literature, Science, Art & Social Service.

There are 10 nominated members presently This story tracks their performance in terms of attendance, participation in debates, questions asked, MPLADS spending & the amount of expenditure incurred on them in the form of salary & allowances. Number of Questions Asked – Five of them score a duck Participation in Debates – Politicians again in the front Under the Member of Parliament Local Area Development Scheme (MPLADS), each MP has the choice to suggest to the District Collector for, works to the tune of Rs.5 Crores per annum to be taken up in his/her constituency. The Nominated Members of the Rajya Sabha may select any Districts from any State in the Country for implementation of their choice of work under the scheme.

Under MPLADS, the role of the MP is limited to recommendation of works. Thereafter, it is the responsibility of the District Authority to sanction, execute and complete the works recommended by the MP within the stipulated time period. The data used for the analysis is sourced from the MPLADS website as of 15th December, 2015.

Since the MP only has a recommendatory role, the analysis only looks at the amount entitled to the MP, amount available to spend and the amount recommended for works.

The amount entitled is not always equal to the amount available to spend since the release of funds is governed by certain rules. Fresh release of funds is subject to the furnishing the utilization certificate of the previous installments. Hence a greater amount is released by the government provided a greater amount is recommended by the MP and spent by the district authority.

The Rajya Sabha website has details of expenditure incurred on Salary & Allowances of MPs from August 2013. Each MP is entitled to the following,

Except K T S Tulsi, all the other MPs were in office since August 2013 (26 months). K T S Tulsi received the least amount since he started receiving his salary only from March 2014. Of the others, the highest expenditure was incurred on Bhalchandra Mungekar (more than a crore rupees), followed by B Jayashree (78 lakh rupees). The difference in the expenditure is only because of the TA/DA since all other components are fixed for every MP. It could be that the particular MP has attended the house more often than others and has travelled extensively than others. In the case of Bhalchandra Mungekar, his attendance is the highest and hence it is only natural that he receives the highest amount of daily allowance.