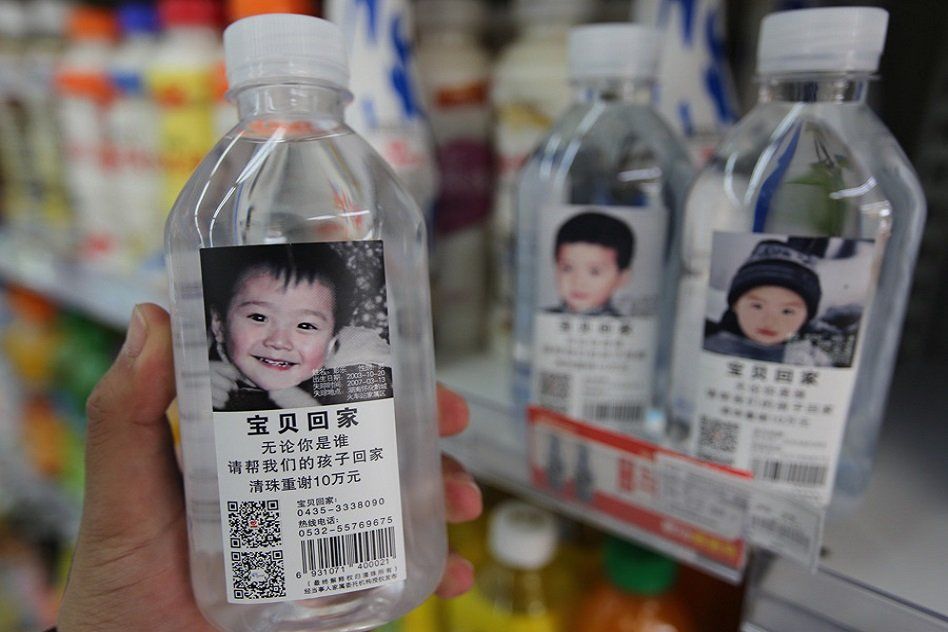 An Innovative Method To Find Missing Children, This Chinese Company Is Printing Their Details On Water Bottles

To search for missing children and to combat human trafficking in China, a bottled water company in Eastern China has begun printing pictures of missing children on its packaging to help parents and authorities find them. The bottles include details of these kids and their parent’s contact details. The label also includes the child’s birth date and a hotline number.

Qingdao Kingtex International has sold 500,000 bottles with information on six children missing since July. The project was launched in cooperation with Baobeihuijia (Baby Back Home), a volunteer group that supports parents looking for their missing children nationwide.

These bottles are sold in supermarkets, airports, and train stations in a bid to locate them. This initiative is similar to an attempt from 1979 when a bereaved father of a six-year-old boy in New York City printed his son’s photo and information on milk cartons and distributed it to neighbours, hoping he could be found. However, after 20 years, the boy was declared dead.

NGOs are playing an important role in assisting for missing children and combating human trafficking in China. BaobeiHuijia has said that it has helped reunite more than 1,700 families since it was established in 2007, and they are working on 31,000 unsolved cases, as reported by Chinadaily.

A traditional preference for a male heir, particularly in rural areas, has led to a black market, with families willing to spend large sums of money for a baby boy. Accurate statistics about China’s missing children are difficult to obtain. But the authorities of China have been clamping down on human trafficking .

In India too, the statistics are sombre and heartbreaking. Over 1.7 lakh children go missing every year and two out of three missing children remain untraced during a period of three years. The data, available with the Ministry of Home Affairs, shows that the number of untraced children in the country has increased by 84% between 2013 and 2015. The total number of untraced children in 2015 was 62,988 as against 34,244 in 2013.

National Crime Records Bureau, in fact, deciphers missing children figures in India in terms of one child missing in the country every eight minutes.

More worryingly, 45% of all missing children have remained untraceable as yet, raising fears of them having been either killed or pushed into begging or prostitution rackets. 55% per cent of those missing are girls.

Maharashtra is one of the worst states in this regard with over 50,000 children having disappeared in the past three and half years. Madhya Pradesh, Delhi, and Andhra Pradesh are distant competitors with all recording less than 25,000 missing children for the same period.