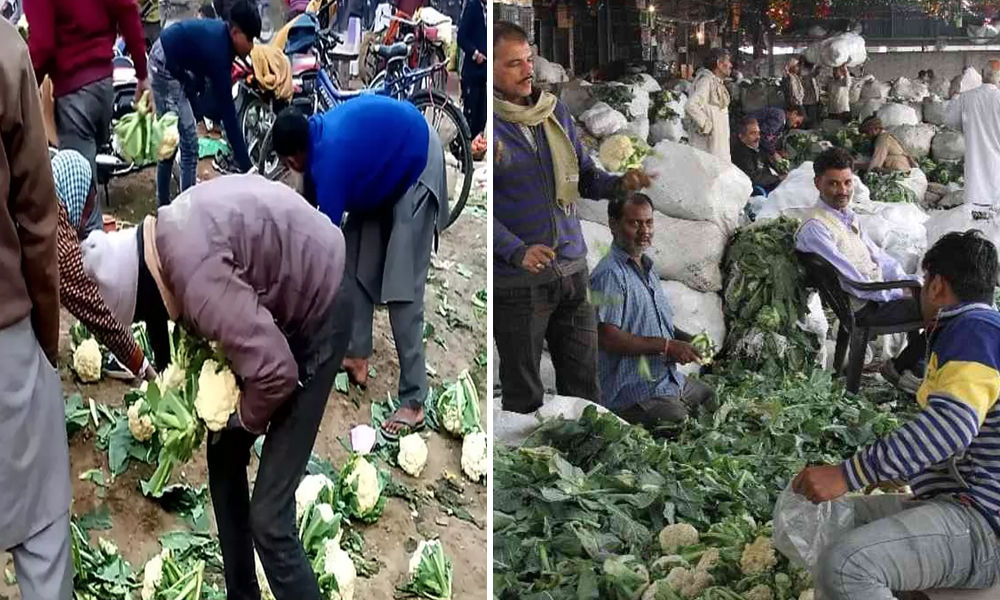 "There are six people in my family, my 60-year-old mother, younger brother, wife and two children. The loss has put us on the edge of starvation," the farmer said.

A farmer in Uttar Pradesh's Pilibhit threw his entire cauliflower produce weighing 10 quintals on the road after the traders offered ₹1 per kilogram for his crop.

A resident of Jahanabad, Mohammad Saleem was offered the trivial price by the licensed traders on the Agricultural Produce Market Committee (APMC) campus in Pilibhit. The amount was equal to the transportation cost he bore for bringing his produce to the campus, Times of India reported.

Speaking to the media, Saleem said that he spent around ₹8,000 on seeds, cultivation, irrigation, fertilizers etc. In addition, the harvesting and transportation cost him ₹4,000.

The cauliflower's retail price was ₹12 to ₹14 per kg, and he expected ₹8 for his produce. "When I was offered ₹1, I had no option but to throw away all my produce to save the transportation cost to bring it back home," the media quoted Saleem as saying.

When questioned about how he would bore the expenses for the next produce, Saleem said he was bound to seek private loans at higher interest rates, as commercial banks have not been extending the credit facility to farmers.

"The loss has put my family, comprising a 60-year-old mother, younger brother, wife and two children on the edge of starvation. My brother and I will now have to work as manual labour somewhere to feed our family," he said.

Responding to the incident, the APMC Secretary Vigil Balyan said that they cannot regulate the procurement of vegetables, as they were not covered under the Minimum Support Price (MSP) policy of the government.

"The volume of supply normally governs the prices of vegetables although the traders intended to earn a major part of the profit," he added.