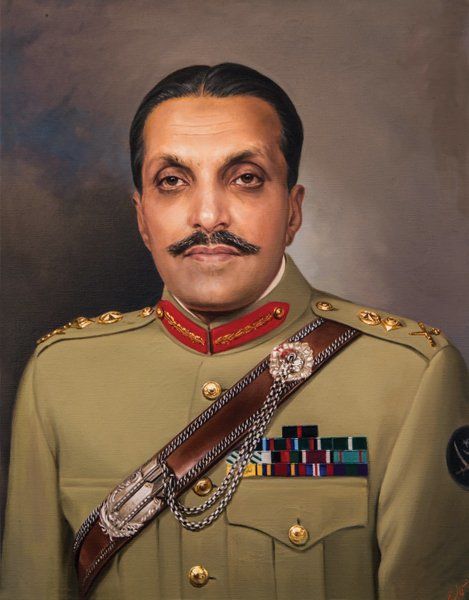 “What is a constitution? It is a booklet with twelve or ten pages. I can tear them away and say that tomorrow we shall live under a different system. Today, the people will follow wherever I lead. All the politicians including the once mighty Mr Bhutto will follow me with tails wagging.” – Muhammad Zia-ul-Haq to an Iranian newspaper.

“I genuinely feel that the survival of this country lies in democracy and democracy alone.” – Muhammad Zia-ul-Haq to The New York Times.

Muhammad Zia-ul-Haq was Pakistan’s longest-serving head of state. A four-star rank general, Zia seized power in a coup and ruled Pakistan as a military dictator from 1978 until 1988, when he died in a mysterious plane crash.

He led Pakistan through a turbulent phase in its history, answering the Soviet invasion of Afghanistan by arming the local mujahideen – many of whom would evolve to become the Taliban. He also improved his country’s relations with China and the United States, while overseeing a drastic worsening of relations with India. Zia also propagated sharia (Islamic law) in Pakistan, initiating the Islamisation of what was more or less a secular country.

Born in Jalandhar, British India on 12 September 1924, Zia was commissioned in the British Army in 1943. After Partition, he joined the Pakistani Army as a Major. He rose through the ranks quickly. In 1970, he was instrumental in putting down the Black September insurgency – a civil war between Palestine and Jordan.

As a reward, Pakistani Prime Minister Zulfikar Ali Bhutto approved Zia’s four-star appointment and made him Chief of Army Staff in 1976.

On 5 July 1977, the dynamics of the global Cold War and Pakistani politics changed irreversibly. On this day, Zia organised a coup against Bhutto and assumed absolute power of the country.

The coup, which was swift and largely bloodless, was codenamed Operation Fair Play. It followed a period of social and political unrest in Pakistan centred around disagreements between Bhutto’s Pakistan Peoples Party and the Islamist Pakistan National Alliance.

In announcing the coup, Zia promised “free and fair elections” within 90 days, but this promise was repeatedly postponed. Zia would remain in control of Pakistan until his death, eleven years later.

The Islamisation of Pakistani society

The process of transitioning Pakistani society from relatively secular to overly Islamic was initiated within days of Zia assuming power.

Six days after the coup, The Guardian reported: “Exhibiting an Islamic fundamentalism that had not been suspected, the Government, which displaced Mr Bhutto early last week, has issued a list of penalties for various crimes, marking a significant departure from the country’s British legal tradition. It is also an indication of the political colour of the new military rulers.”

The transition to theocracy was officiated by the Hudood Ordinances between 1977 and 1979. These were the laws that replaced parts of the British-era Pakistan Penal Code, adding new criminal offences of adultery and fornication, and new punishments of whipping, amputation, and stoning to death.

The Hudood Ordinances were intended to implement Sharia or to bring Pakistani law into “conformity with the injunctions of Islam” by enforcing punishments mentioned in the Quran and sunnah.

The system provided for two kinds of offences — hadd and tazir — with different punishments to go with them. Hadd offences (fixed punishment) require a higher standard of proof than tazir (discretionary punishment) and their punishments are more severe.

The zina (extramarital sex) provisions of the law were particularly controversial and critics alleged that there were “hundreds of incidents where a woman subjected to rape, or even gang rape, was eventually accused of zina” and incarcerated. Supporters defended the Ordinances’ punishments as ordained by God and the law as the victim of “extremely unjust propaganda” in the media.

“The rape of the law”

Zia’s Islamisation – “the rape of the law” – proved costly for liberalism and secularism in Pakistan. The implementation of fundamentalist interpretations of Sunni Islam attracted enthusiasm – and money – from Wahabi Saudi Arabia. Following the Soviet invasion of Afghanistan, Zia sought a war against the communists and further inflamed Sunni rhetoric – whilst inviting money and ammunition from the United States for his jihad in Afghanistan (explained below).

While many of the Hudood Ordinances have been overturned by court judgements after Zia’s death, Pakistani society – particularly in rural areas – still enacts some of the components of the laws.

The Soviet war in Afghanistan

On 25 December 1979, the Soviet Union (USSR) ‘intervened’ in Afghanistan. This was to aid the socialist ruling party, the People’s Democratic Party of Afghanistan, in curbing rebellions that had sparked across the country.

The invasion occurred during the Cold War. To frustrate the Soviet occupation of Afghanistan, the United States funded several Afghan rebel groups. These were the mujahideen, and they waged guerilla warfare against the Soviets with the help of American weapons and funds – channelled through Pakistani intelligence services.

Zia did not live up to his words.

Zia began funding Afghan mujahideen in their struggle against the Soviets. In this conflict, he found an unlikely ally – the United States, which was eager to destabilise the Soviet occupation of Afghanistan. Zia was now in a position to demand billions of dollars in aid for the mujahideen from the Western states, famously dismissing a US- proposed $325 million aid package as “peanuts”. US President Ronald Reagan increased financial aid for Pakistan, sending dozens of F-16 jet fighters and Stinger missiles to the Pakistanis and mujahideen.

Pakistani involvement in the Soviet war in Afghanistan saw the increasing role of the Inter-Services Intelligence (ISI) and the increasing power of the mujahideen. Zia also benefited from selling US-supplied weapons to Iran. The national economy was buoyed – not least because of increasing interaction with the West.

When the Soviets finally left Afghanistan in 1989, Afghanistan experienced a prolonged period of turmoil and political vacuum. In the late 1990s, the Taliban seized control of Afghanistan and in 2001 the Americans invaded the country – but that is a different story.

On 17 August 1988, after witnessing a US M1 Abrams tank demonstration in Bahawalpur, Zia left for Islamabad. Shortly after a smooth takeoff, the control tower lost contact with the aircraft. Witnesses who saw the plane in the air afterwards claim it was flying erratically, then nosedived and exploded on impact. In addition to Zia, 31 others died in the plane crash, including the American Ambassador to Pakistan.

There remains extensive speculation over the circumstances of Zia’s death. Some people, including senior individuals in the Pakistani Army, allege that the plane crash was the result of an assassination plot by the United States, the Soviet Union, Israel, and/or India.

The Economist noted how Zia’s theocratic and imperialistic ambitions proved costly for stability in Pakistan: “The menace of sectarianism in Pakistan today is a modern creation, born amid proxy-wars for international influence and an insecure state’s disastrous attempt to co-opt militant Sunni Islam in support of its domestic and regional ambitions.”

Zia-ul-Haq remains a highly polarising and widely discussed figure in Pakistan and around the world. In his country’s short history, his legacy remains the most toxic, enduring, and tamper-proof.

Historians and political scientists widely discussed and studied his policymaking skills, some authors noting him as “The Ringmaster”, “Master of Illusion”, and “Master Tactician”.

The 1980s was a decade that was eventful, violent, and full of contradictions.

Unlike the 1980s, Zia was not full of contradictions. He had the singular goal of Islamising Pakistan and building its military prowess. To achieve his goals, he dismantled a flawed but functional democracy and put in place a brutal dictatorship. He enforced fundamentalist laws and propagated sharia at the expense of secularism. He allowed his country to be the staging area for America’s proxy war with the Soviet Union, enabling the rise of the Taliban in Afghanistan and in Pakistan as well.

There are no contradictions when it comes to Muhammad Zia-ul-Haq. He was a dictator and a theocrat who plunged his country into religious fundamentalism and a disastrous foreign policy.