"What About Whataboutism?" How Our National Debate Has Fallen To An All-Time Low 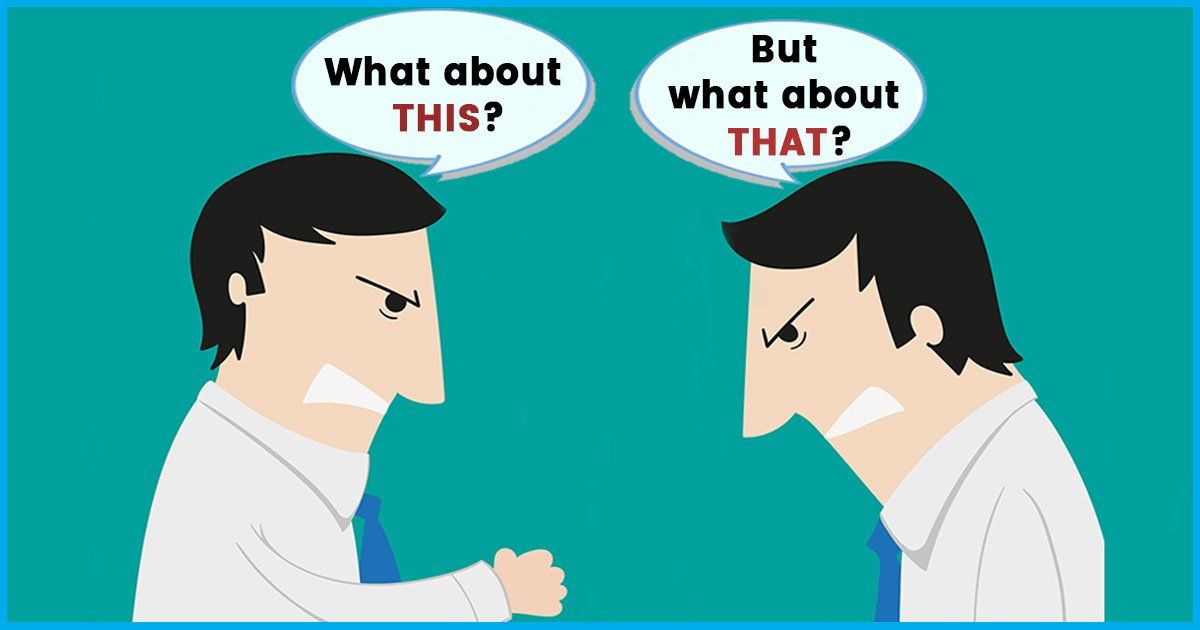 In a recent Supreme Court order, the sale of firecrackers in the Delhi-NCR region has been banned till November 1, owing to the rising pollution in the country’s capital. Last year, the pollution in Delhi was reportedly the worst in 10 years.

Ever since the court’s ruling was out, many resorted to condemning it, citing it as an attack on the Hindu Festival of lights.

Yes, the festival of ‘lights’; not smoke, not noise. Not firecrackers.

The Hindi word ‘Diwali’ literally means a row of lights. It is celebrated to mark the day when Lord Rama returned to Ayodhya after 14 years of exile during which he fought and defeated the demon king, Ravana. According to the Ramayana, people greeted their beloved king by lighting his path with rows of diyas (lamps).

There are also many other versions of Diwali and stories which depict why it is celebrated. In the Mahabharata version, the festival marks the return of the Pandavas after 12 years in exile. Diwali also signifies the birth of Goddess Laxmi and her marriage with Vishnu. Across India, many deities – Kali, Krishna, Ganesh, Saraswati – are worshipped during Diwali.

Similar to any decision, the SC’s judgement attracted a wave of whataboutism – a widely practised logical fallacy used to defend a current anomaly by pointing out to a previous anomaly.

“What about the firecrackers burst during Christmas and New Years?”

“Why not ban firecrackers forever?”

“What about the SC’s viewpoint on cattle slaughter?”

“What about the goats that are sacrificed during Bakrid?’”

“Is the SC itself environment-friendly?” – were the kind of responses from people across social media.

Not just during Diwali, but to combat rising levels of air pollution, the Delhi government had imposed the odd-even rule for private vehicles to promote the use of public transportation.

The SC’s judgment wasn’t an attack on the Hindu festival of lights. It wasn’t a communally motivated decision. The SC doesn’t have an agenda against the majority Hindu section of our country. Its decision is an attack on Delhi’s unbreathable air, which escalates during Diwali.

The judgment was given based on a plea from three asthmatic children. The ground for the ban was health.

One cannot give this a religious angle. Not only during bakrid, but goats are sacrificed across India during Durga Puja and Kali Puja, in temples and by various tribal communities. If you want to raise concerns over animal sacrifices, talk about it from an environmental perspective and not a religious one.

The only reasonable question raised by some citizens was – what about the livelihood of the thousands employed in the firecracker industry?

The SC’s decision might be a knee-jerk reaction to fighting the global issue of climate change. Here, any advancement needs to be gradual and not without alternate livelihood options for those employed in the Indian firecracker industry, which, is the second largest in the world.

However, there are other government decisions too that have burned the firecracker industry, which, includes a large number of unregulated traders hurt by demonetisation last year, and now, the 28% GST imposed on firecrackers (the earlier tax was 14.5%).

But there is no debate on whether we should do away with practices that abuse the environment when, this year, we experienced the hottest winter in history.

While it is plausible to question decisions, whether made by the judiciary or the legislature, pondering upon facts holds equal importance.

Marital rape should be made illegal.

“But what about the ones who might misuse the law?”

“But what about the floods in the north-east and Gujarat?”

Gau Rakshak vigilantism is a caste and religion based violence.

“But what about the mob violence during UPA’s rule?”

Oxford Dictionaries defines whataboutism as “the technique or practice of responding to an accusation or difficult question by making a counter-accusation or raising a different issue.”

Its origin can be traced back to when the Soviets defended its human rights violations by citing the example of apartheid in South Africa and lynchings in the US. Time and again, it has been used by American President Donald Trump – blaming both sides for the Charlottesville attack and responding to ties with Russia with ‘what about Hillary’s emails?’.

The issue with whataboutism is the inherent hypocrisy. It is similar to a dog running after it’s tail – there is no end. Our politicians cannot use it to evade responsibility and we cannot use it to defend their incompetence.