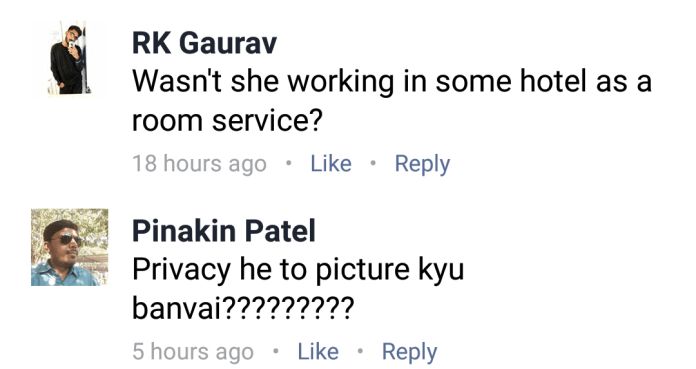 The popularity of the internet and social media has given rise to a huge set of online abusers who do not hesitate to use a tone or language that intimidates and threatens one’s dignity, safety, and security. Various individuals have become victims of abuse on social media. One such episode happened recently that involved Sakshi Singh Rawat.

On March 28, Tuesday, a picture of Mahendra Singh Dhoni authenticating his fingerprints to avail the Aadhaar card was posted on the official Twitter handle of CSC e-Governance Services India Ltd – CSCegov.

But along with the picture, the agency also tweeted out the photo of Dhoni’s application form that contained his personal details.

The post was retweeted by Information and Technology Minister Ravi Shankar Prasad as well.

Outraged at the breach of privacy, Sakshi expressed her disappointment through a series of tweets exchanged between her and the IT minister.

@rsprasad @CSCegov_ is there any privacy left ??? Information of adhaar card including application is made public property!#disappointed

@rsprasad Sir I m talking about the application which was tweeted along with picture by @CSCegov_ pic.twitter.com/EHYwzfzfKR

So far so good.

However, Facebook trolls took the debate to such a level where Sakshi was unreasonably abused. Nothing justifies the abuse faced by her.

In a democracy, it is the taxpayers money through which the government runs and functions, hence everyone has the right to question.

At times, even if we don’t agree with the criticism, arguments or the remarks made by an individual, we can always counter that without being abusive or harassing the other person.

The internet was developed as a progressive medium of communication – one which lets us express ourselves openly. All Sakshi did was express her grievance, but she was brutally abused.

Internet trolls who disrupt conversations by posting abusive content are hijacking social media interaction. This not only creates a situation where the debate is diluted, and misinformation is everywhere: it also forces the general public to resort to self-censorship.

Trolling is the worst form of dialogue on the internet. It appeals to those who subscribe to the lowest common denominator of public taste. It is also contagious and inflammatory. As social media users and responsible citizens, we have a duty not to resort to trolling or to stoop to the level of trolls. At times, even if we don’t agree with the criticism or the arguments or the remarks, we can always counter that without being abusive or harassing the other person.