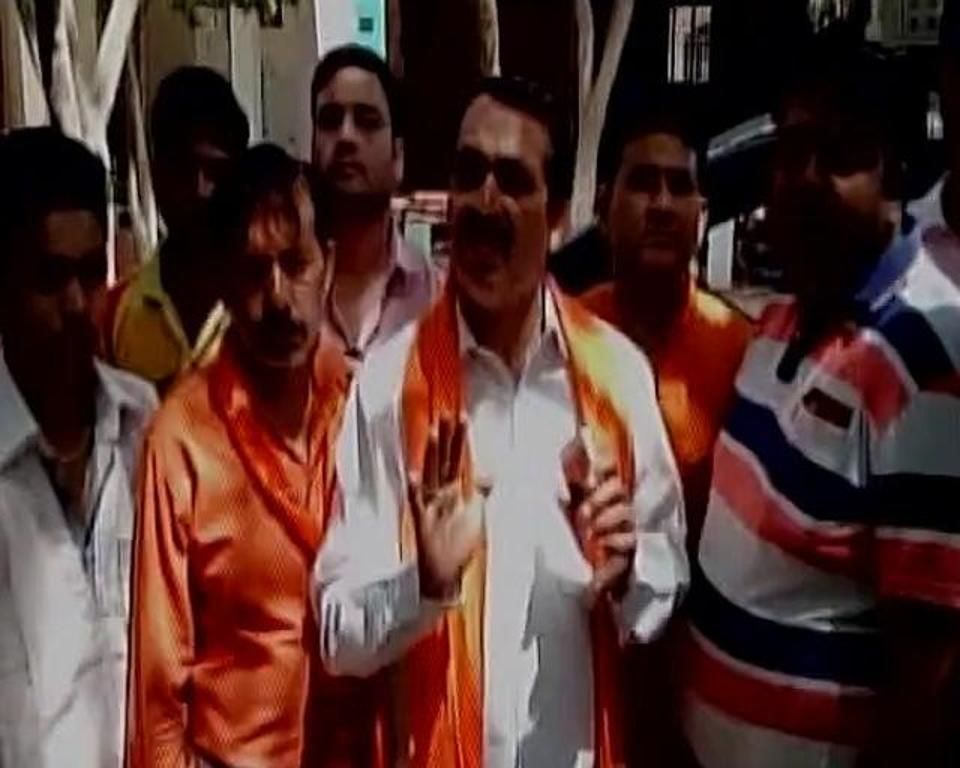 On 11 April, the locality of Shastri Nagar, Meerut was the scene and the actors were state-sanctioned activists and an adult (consenting) couple spending time in the privacy of their rented accommodation. They were publicly shamed and taken to the police station. Later, the girl was let go with a stern warning and the guy was arrested on grounds of public obscenity (even though they were in their private residence).

The goons aka activists barged into the house. An activist can be seen in this NDTV report angry on the fact they the two consenting young adults were alone in a house and they did not open the door after hearing the repeated banging of an angry mob. The local leader of the goons, Nagendra Pratap Singh, is also on video proclaiming that the young couple was there because that Muslim man had the intention of converting this Hindu woman and that is why they (the Hindu Yuva Vahini) had to launch this mission. After the scared young man tries his best not to get beaten, shamed, and arrested for committing no crime recognised by the law, the goons lay the blame solely on his desire to corrupt young girls and indirectly on his faith.

The level of public shaming, invasion of privacy and coarseness displayed is beyond horrific. The couple is forced to answer questions (loudly) in front of a video camera. “Where are you from? What is your father’s and brother’s name? Where do you live? Have you converted?” More interrogation by the vigilantes followed and the police sided with the hecklers and did not uphold the law. If the couple answered slowly or hesitantly, the members loudly screeched and hurled expletives at them.

The police officer can be seen claiming in the video that it was not on Vahini’s complaint that the man was booked under IPC. The Meerut SSP subtly subverts blame from Hindu Yuva Vahini to the young man and said the complaint originated from the girl’s family (who came to know about the public shaming by the Yuva Vahini only after the police called them and in order to save face and save themselves from the wrath of these lawless activists probably acquiesced with whatever the police told them). Incidentally, Meerut has one of the highest crime rates against women. In this video, Hindu Yuva Vahini’s Sachin Mittal justifies the Anti-Romeo Squad in Meerut and also says that love-jihad is a big issue in the state. The Vahini’s membership is swelling and they keep an eye on campuses and other hangout places and hand out unsolicited ‘advice’ (read direct threats). They use social media to spy and report on alleged lewd behavior. All this has resulted in increased polarization, fear among innocent young people who can’t go out or they will be forcibly shamed and even beaten or arrested, and a decline in profits of proprietors of restaurants and shops who largely cater to youth.

Say “No” to vigilantism and hatred

The new UP government’s first move was to deliver on an election mandate of forming Anti-Romeo Squads in the state in an attempt to ensure security for women. However, untrained, self-proclaimed activists have given this move a sour taste.

These anti-romeo squads are under Hindu Yuva Vahini, headquartered at Hindu Bhawan, near the Gorakhpur Railway station. It was founded by UP CM Yogi Adityanath more than 16 years ago and whose members in the past have been charged with arson, murder and inciting riots (Mau riots of 2005). In 2007, two coaches of the Mumbai-bound Mumbai-Gorakhpur Godan Express were set ablaze by them. Now, this very same group roams with complete freedom and disdain towards right, rules and regulations recognized by law. The worst part is that the police is under pressure to sweep the activities of these people under the rug and instead blame, book and harass the law abiding citizens who had the bad luck of being present at the wrong place at the wrong time. Now they are even barging in private residences in their quest of love-jihad. If there is an afterlife, our constitution’s framers and freedom fighters must be in shock to see how the state is making a mockery of fundamental rights. They spent their lives to ensure that basic freedoms including the right to practice, profess, propagate one’s religion is enshrined in the constitution and lest not India become a country where individuals live in fear. The idea of separating religion from the state has an undeniable merit and there is a reason that nations who have the highest Human Development Index also rank high on freedom of press, tolerance towards pluralism, and safety of women. The kind of state sanctioned vigilantism in vogue in today’s India is nothing but a manifestation of years of low level of education, unemployment and poverty where misguided youth unable to vent out their frustration are carried away by opportunistic leaders who care only for power or money in the garb of religion.

In all the videos, news reports of similar incidents and law-breaking, comments section is filled with vitriol-spewing members of public who hurl labels like bhakts, sickulars, aaptards, libertards and bring out any argument to justify their claims in issues totally unrelated like pandits in Kashmir, the plight of jawans or Pakistan. They fail to understand how they are being manipulated and how the duties of being an Indian citizen need them to respect the law of the land. How about we first ask the state to ensure education, employment, gender equality, communal harmony and perhaps most important check our own behaviour first before we become vigilantes and social media commentators?