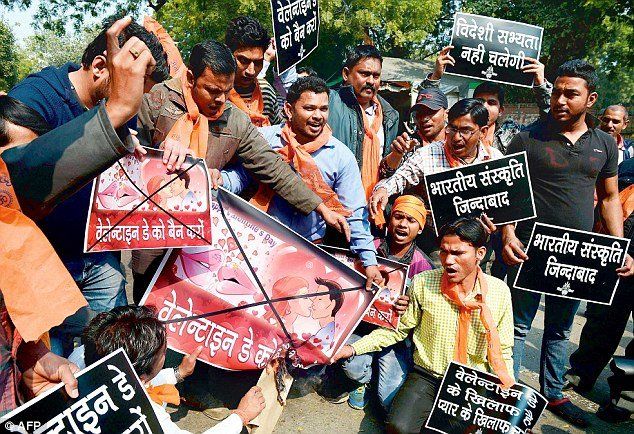 Bajrang Dal Goons Beat Couples On Valentine's Day: For Them, The Law Is Just A Joke

Bajrang Dal, the youth wing of the Vishwa Hindu Parishad (VHP), awoke again in the second week of February after a year of slumber to suddenly care about “Indian culture”. Bajrang Dal goons chased couples who were celebrating Valentine’s Day. They swept parks and public spaces, chasing suspected couples, and physically assaulted many.

The events mainly took place in Bihar, Jharkhand, and Uttar Pradesh. In some instances, it was reported that these self-proclaimed guardians of Indianism misbehaved with young women while thrashing their male counterparts. In other instances, they paraded the city on bikes and motorcycles, forcing couples to do sit-ups as punishment for celebrating Valentine’s Day, and forced many women to tie rakhis to their male friends.

This is a show of misplaced ideas of “culture” which ended in violence. They seemed like a group of patriarchy-laden, violence-inducing, constitution-ignorant, freedom-hating, hypocritical rowdies disrupting what should have been just another day for Indians. A history of violence

Since its inception in 1984, the extremist and fundamentalist organisation, “Bajrang Dal” has been the cause of several cases of assault, violence, and vandalism. They have claimed to be torchbearers of “Indian culture”, responsible for protecting it against “foreign influence” and “anti-national” elements.

On the contrary, they have become a serious blot on Indian democracy and are among the most prominent “anti-national” elements.

This moral policing is immoral and criminal. Human Rights Watch has labelled them an extremist group while historians have drawn parallels between the methods of Bajrang Dal and those of Hitler’s SA in Nazi Germany. LK Advani has also criticised Bajrang Dal’s rampant use of violence.

Former PM Atal Behari Vajpayee has voiced the need to “keep in check” the group. He has said that the group “only embarrassed the BJP”. The Prime Minister’s opinion has been echoed by critics across India and the world.

Not the protectors of our culture

They say tolerance and nonviolence are Indian virtues. Clearly, these are not the values that this “Indian” group is echoing.

The group’s slogan is “service, safety and culture”. This is quite ironic because they have threatened the very notion of public safety in regions where they are active, and the only culture they espouse is one of violence and irrationality. Why are fascism-loving ruffians allowed to walk free in a democracy? Why are they so fearless in their tactics, ignorant of the consequences? Why are they not apprehended by law enforcement officials and punished according to the law they have so much disdain for?

The fact that Bajrang Dal goons feel free to spew their hate, and assault youngsters and minorities and go largely unpunished is a testimony to the drawbacks of our law enforcement system. Meanwhile, the casualties not only include innocent citizens; they also include the Indian constitution and India’s reputation.

Moral Policing In Mangalore, Man Stripped And Beaten By Mob