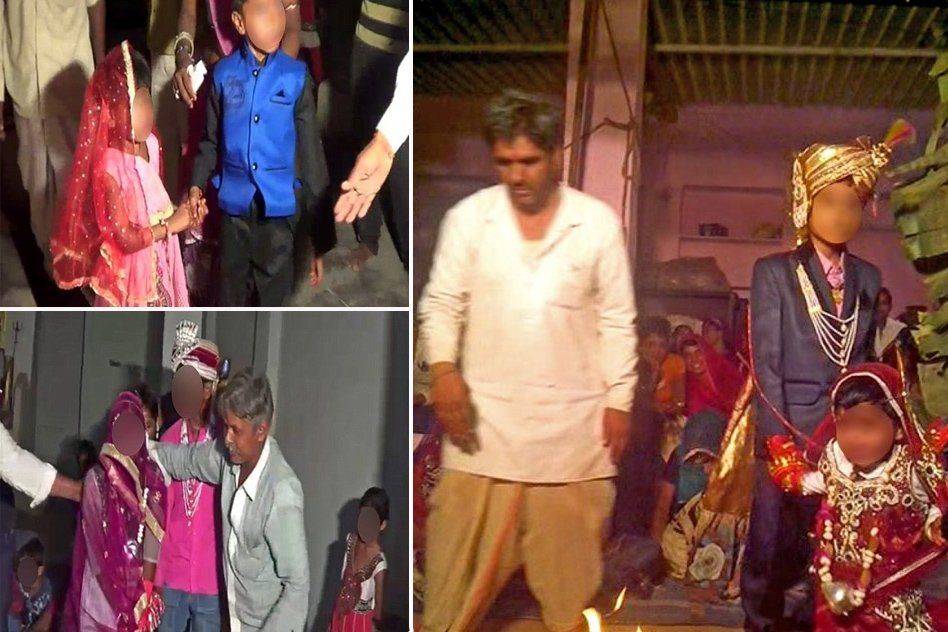 [Video]Rajasthan: Mass Child Marriage With Young Brides Crying As They Are Wed

Near about six marriages took place in two days around the Hindu festival of Akshaya Tritiya. The video shows how girl children are being dragged by their parents and priests for the marriage, with grooms who are also minors . At this age, they hardly know what marriage is.

One of the clips shows a five-year-old bride being scolded and dragged by the priest to walk around the fire with her groom, who is 11-year old. Though the bride is crying loudly, no one seems to bother about it.

According to the police, the ceremony took place at a secret venue outside the district, so that the police won’t be able to intervene in the act. Cases have been registered against these families, but they are currently hiding.

The District Magistrate Ved Prakash has said, as soon as the culprits are found, the marriages of the children will be void and the court will take strict action against the perpetrators.

India ranks sixth in the world in the number of child marriages that happen every year. According to the Census report of 2011, nearly 17 million Indian children between the ages of 10 and 19 are married. 76%, or 12.7 million, are girls. Though the legal age for girls to marry is 18, this regressive practice is rampant in the states of Uttar Pradesh, Bihar and Rajasthan.

According to a UNICEF report, Unite for Children, over 700 million women alive today were married as children, 1 in 3 girls in the developing countries of the world were married before 18 and entered sexual union, and if we do not take arms against this evil social practice then by the end of the decade an estimated 142 million girls will be married as children.

The Logical Indian appeals the state governments to look into this matter of concern more seriously so that it can be curbed completely. Child marriage is a social evil, depriving children of education, wisdom and knowledge and pushing them to a future full of uncertainties. It is a shame on every Indian that this crime is being practiced even in 21st century. It kills the childhood from children. We all have to come forward to stop this practice.