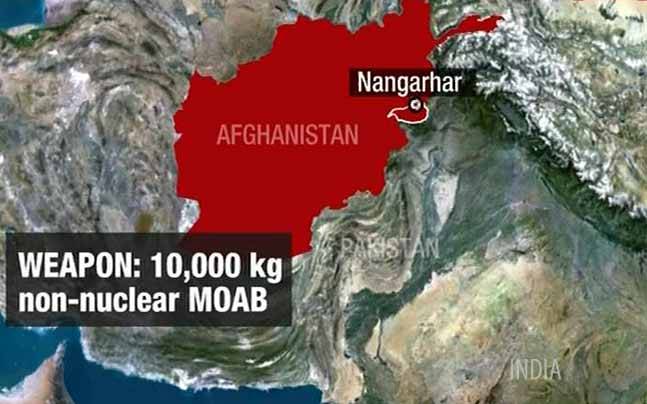 U.S. forces on Thursday night at 7:32 pm local time dropped the biggest non-nuclear weapons in its arsenal in a large-scale strike against ISIS in eastern Afghanistan. The GBU-43 bomb or the MOAB (Massive Ordnance Air Blast) also known as the Mother of all Bombs was dropped on the ISIS fighters and facilities in the country’s Nangarhar province. It was the first time the United States has used this size of bomb in a conflict. It was dropped from a MC-130 aircraft in the Achin district of Nangarhar province, close to the border with Pakistan, Pentagon spokesman Adam Stump said. GBU-43 is a 21,600 pound (9,797 kg) GPS-guided munition and was first tested in March 2003, just days before the start of the Iraq war. For comparison to the 21,000-pound MOAB, each Tomahawk cruise missile launched at a Syrian military air base last week was 1,000-pounds each. It explodes in the air, which creates air pressure that can make tunnels and other structures collapse. It can be used at the start of an offensive to soften up the enemy, weakening both its infrastructure and morale. “The strike was designed to minimize the risk to Afghan and U.S. Forces conducting clearing operations in the area while maximizing the destruction of ISIS-K fighters and facilities,” the Pentagon said in a statement. Military officials did not immediately know how many ISIS fighters were killed or if any civilians died in the attack. There are about 8,400 US troops in Afghanistan and they regularly perform counterterrorism operations against ISIS in the Nangarhar Province. Last week, a U.S. soldier was killed in the same district as the bomb was dropped while conducting operations against Islamic State. Last Friday, the US launched 59 Tomahawk cruise missiles from the Mediterranean Sea at the Shayrat Airbase controlled by the Syrian government. The strike was ordered by US President Donald Trump as an alleged retaliatory response to the Khan Shaykhun chemical attack that occurred on April 4. Nine civilians, including four children, were killed in the United States missile attack on a military airbase in Homs province in the early hours of Friday morning, the Syrian state news agency has said. These attacks are seen by the analysts as a change in Trump’s stance towards the US foreign policy.