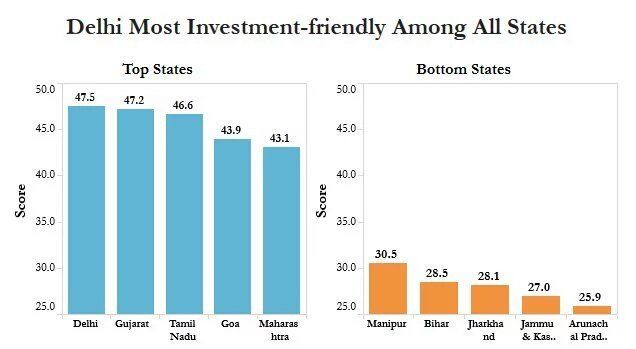 The National Council for Applied Economic Research (NCAER) released its report “The NCAER State Investment Potential Index”, which states that Gujarat and Delhi are the most investment-friendly hubs in India with Bihar and Jharkhand occupying the bottom most slots. Andhra Pradesh and Tamil Nadu have been discovered as the most corrupt states for doing business while it is most difficult in West Bengal to acquire land, environmental clearances and approvals.

The criteria of the report:

Labour, infrastructure, economic climate, political stability, governance and perceptions of good business climate were the five major criteria on which the survey was conducted. The report contains two types of rankings: First, N-SIPI 21, an index that ranks 21 states on the issues above, including through industry surveys; second, N-SIPI 30 which includes all states–including nine not covered by industry surveys–and is based on four issues, excluding perception.

Major findings of the report:

The Aam Aadmi Party in Delhi has been making all out efforts to make it easier to conduct business there according to a statement of the Department of Industrial Policy and Promotion in May 2016. Moreover, the central government is working in tandem with Delhi and Maharashtra to boost India’s rank into the Top 50 globally on the parameter of ease-of-doing-business. Corruption was stated as the biggest hurdle in doing business according to 79% of industry respondents; difficulty in getting approval was stated as the major bottleneck by 72.1 % and acquiring environmental clearances stated by 66.7%.

This comes as no surprise given the fact that according to the Corruption Perception Index 2015 released by Transparency International earlier this year, India occupied the 76th rank in a total of 168 counties.

However, an editorial in The Economist is of the opinion that in 2008 crony wealth reached 18% of GDP, paralleling Russia, while at present it is only 3%, similar to Australia. The proceeds of capitalism have shifted from the clutches of business dynasties to founders of Flipkart, which is an online portal.

74.3 % of the respondent in Andhra Pradesh stated corruption as a “severe” problem while nobody stated it as a severe problem in Himachal Pradesh.

The Logical Indian team congratulates the state governments of Gujarat and Delhi for their marvelous performance in The NCAER State Investment Potential Index. We urge the governments of Bihar and Jharkhand to pool in more resources to improve their ranking while the government of Andhra Pradesh is requested to take measures to curb corruption in doing business in the coming times. Through our combined efforts we can certainly improve our position in the global ranking in terms of ease-of-doing-business.