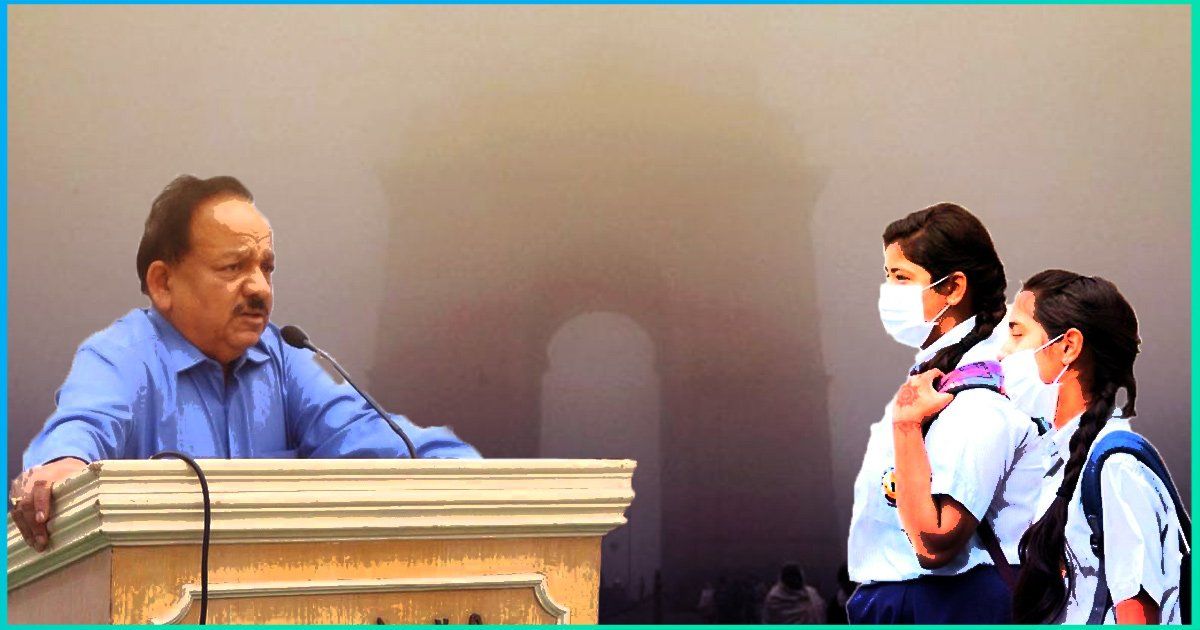 While Delhi Continues To Choke, Environment Minister Says, Smog Is Not Like Bhopal Gas Tragedy, No Need To Panic

In an interview with the CNN-18 news channel, the Union Environment minister has said the city’s toxic air and smog is no cause for no alarm and “routine precaution” is needed to cope with it, even though the doctors have called a public health emergency.

Harsh Vardhan contrasted the pollution choking large pockets of North India, including the capital, with the 11984 gas leak tragedy in Bhopal which killed at least 25,000 people and remains to be one of the world’s worst industrial disaster.

In an interview which was published on the CNN-18 news channel website on Tuesday, he argued that Bhopal was “an emergency situation where you have to panic and you have to see what you have to do.” Reflecting on the smog crisis he said, “I am not saying we should not do anything about it, everyone has to respond to what he is supposed to do. But there is no need to spread panic among the people.”

Delhi smog is not the benchmark of an emergency

Dr Harsh Vardhan said, his benchmark for an “emergency” is the Bhopal Gas Tragedy. He further said, “I am talking in practical terms. You see, what happened in Bhopal when there was a gas leak. Hundreds of thousands of people had to be rushed to the hospitals. The people of Delhi need not panic as several steps are being taken by the government to mitigate the air pollution.” He also emphasised that the air quality in Delhi is improving.

The environment Minister further added that “routine precautions” were all that needed to cope with the level of dangerous pollution in Delhi and surrounding areas. The levels of dangerous pollutants in the air have exceeded World Health Organization safety guidelines several times every day for the past few week.

Experts say that the dangerous level of pollution is wiping off the lives of its citizens. The political leaders and ministers are being criticised for failing to do more to tackle the soaring pollution levels. A recent report published by the Lancet Medical report said that the rising levels of pollution in the country has claimed as many as 2.5 million lives in India in 2015, the highest in the world.

On Tuesday in Delhi, levels of PM 2.5 were around 400. PM 2.5 is the tiny particulate matter that is most harmful to human health and this data makes its way into the ”hazardous” category. Delhi, now is the world’s most polluted capital city, according to WHO and it has pollution levels which surpass that of Beijing’s on a regular basis.

The city’s air quality had deteriorated to reach the “hazardous” levels last week. Indian Medical Association declared a public health emergency and urged the administration to “curb this menace.” Authorities have taken measures to curb the pollution by temporarily closing down schools and also restricted trucks from entering the city.

The average air quality index (AQI) of the Central Pollution Control Board (CPCB) was 308, which falls in the ‘very poor’ category, following a week-long smog episode when pollutants shot up to emergency levels.

This is not the first time, the Union Environment Minister’s comment has invited harsh criticism. Earlier, Dr Harsh Vardhan ha said that while smog is harmful, it “does not kill”. According to a report by the News18 Ashutosh, the spokesperson of AAP lashed out at the Union Minister for comments on the Delhi smog.

He said, “Dr Harsh Vardhan is a medical professional and Union Minister but this is not the first time that he has made such comments. Earlier he had said that there is no reason to panic. Then he said, that there is no reason to panic. Now he said, that it is harmful but no one dies of pollution. This shows that the BJP and its leaders know nothing about the pollution, nor they do want to know about it. Dr Harsh Vardhan is not only a Union Minister but he also is an MP from Delhi. Both Central government and Delhi government cannot be exonerated from their responsibilities.”

Instead of being sensitive to the current environmental crisis in the national capital and large parts of northern part of the country, the Union Minister’s makes it to the headlines with comments as “pollution is never the reason for death in one’s death certificate.” The attempt to compare soaring levels of Delhi pollution with the Bhopal Gas Tragedy is an extremely vague idea.

It is an attempt to dilute the serious condition of Delhi smog by comparing it with the Bhopal gas leak which claimed the lives of over 20,000 people. The Logical Indian community is taken aback by the attempt of diluting the situation by the Union Minister who incidentally is a qualified medical professional. It urges the government to take necessary steps to curb the devastatingly high levels of pollution in the national capital and also urges all community members from that packet to remain safe at such times.