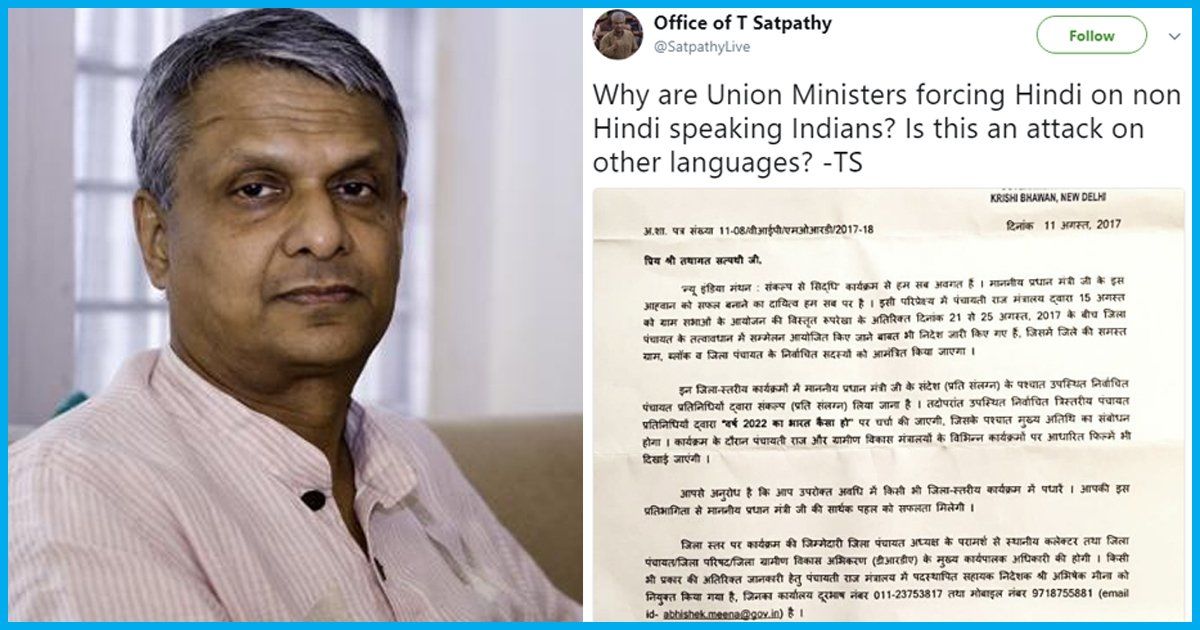 "I Don't Understand Hindi; Kindly Write To Me In Odiya Or English": BJD MP Objects To Union Minister's Hindi Letter To Him

Union Minister Narendra Singh Tomar had sent a letter to Biju Janata Dal (BJD) MP Tathagata Satpathy and several other parliamentarians on 11 August, inviting them to the government’s Sankalp Se Siddhi (‘Resolve to Achieve’) programmes being planned at the Panchayat level to discuss ‘India at 2022’ from August 21-25.

However, the letter was written in chaste Hindi and Satpathy claimed that he was unable to comprehend the contents of the letter. Exasperated, he tweeted on 18 August, “Why are Union Ministers forcing Hindi on non-Hindi speaking Indians? Is this attack on other languages?”

Why are Union Ministers forcing Hindi on non Hindi speaking Indians? Is this an attack on other languages? -TS pic.twitter.com/QkcMwKXV1J

“Respected Sh Narendra Singh Tomar, I recieved your letter dated 11/8/2017. I thank you for that. I would like to inform you with regret that because of my inability to understand Hindi, I am unable to comprehend your letter. I would like to point out that, our state Odisha, being a category C state, you are requested to communicate using either Odia or English. May Lord Jagannath keep you blessed.

This squabble should be seen in the light of Opposition parties’ protest that the Union Government has been trying to impose Hindi as a national language (which it is not).

Satpathy made it quite clear that he respected all languages, but he opined that this should not lead to giving less importance to languages like that of Bangla and Odiya.

Speaking to the Hindustan Times, he said, “I would also like to state that our state Odisha falls in the C category so kindly send us a letter in English or Odia.”

The MP accepted that he knew Hindi but he had taken this stance because he was against the forcible imposition of any language.

Similar complaints from non-Hindi speaking ministers have also been noted in the recent past. On 9 August, speaking during the Quit India Movement’s 75th-anniversary event, All India Anna Dravida Munnetra Kazhagam’s (AIADMK) MP and deputy speaker MThambidurai reminded that Hindi is not the official language of India.

Also, Dravida Munnetra Kazhagam (DMK) MP Tiruchi Shiva, in his welcome speech to the new Vice-President elect, Venkaiah Naidu, started his speech in Tamil but had to cut short his speed because of unavailability of translators. The MP said that even after 70 years of Indian independence, one needs to give one-hour notice to speak in one’s mother tongue.

A senior official at Tomar’s office reportedly said that the Minister normally does all his work in Hindi, it was not a deliberate action on his part. Also, the instruction to the district administration from the Ministry’s Secretary has been conveyed in English.

The Logical Indian has always been against the imposition of any language in India. In the past, we opposed the moves by the centre to impose Hindi through various means, and we criticised ministers for making misleading statements calling Hindi the national language. We have also raised our voices criticising the move by the Kannada Development Authority directing the regional heads of all nationalised, rural and scheduled banks to make it mandatory for their non-Kannada-speaking staffers to learn Kannada within six months. The recent spate between BJD MP Satpathy and Union Minister Tomar is another ramification of the protest against the imposition of Hindi by the Union government.