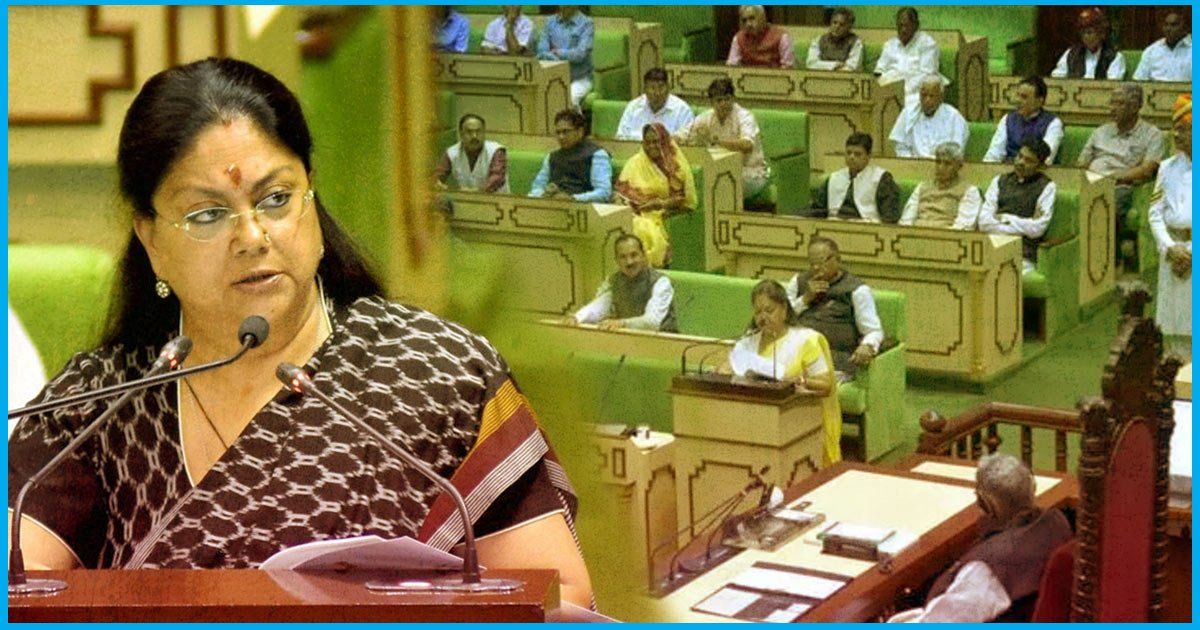 The Rajasthan Assembly passed two bills on Wednesday – one related to disqualification of lawmakers and the other power distribution management, said a report by the Business Standard.

The House passed The Rajasthan Legislative Assembly Members (Prevention of Disqualification) Bill-2017 and The Rajasthan State Electricity Distribution Management Responsibility (Amendment) Bill-2017A. The Rajasthan Backward Classes (Reservation of Seats in Educational Institutes and of Appointments and Posts In Services Under The State) Bill-2017A was tabled in the House by Social Justice Minister by the Social Justice and Empowerment Minister Arun Chaturvedi whereas the CrPC (Rajasthan Amendment) Bill-2017 was referred to the select committee of the House.

What is the bill

This bill seeks to protect public servants and judges from prosecution. It also gags the media from reporting on any allegation against them without its prior sanction. This sparked a legal challenge and protests outside the assembly.

As per the Bill, MLAs cannot be disqualified on the basis of them holding posts of state ministers or deputy ministers , government’s chief whip, government’s deputy chief whip, parliamentary secretary, leader of opposition in Rajasthan state assembly.

The Criminal Laws (Rajasthan Amendment) Bill., 2017 was introduced in the Assembly by Home Minister Gulabchand Kataria. It was introduced to replace an ordinance declared on 7 September. It seeks to shield both serving and retired judges and public servants from being investigated in any on-duty action without government’s approval.

The aim of the ordinance is that people should not misuse Section 156(3) CrPC to tarnish the image of honest officers by putting baseless allegations, said Minister Kataria. He further added that 73% of people who were probed during 2013-2017 faced mental harassment although they were not guilty.

The ordinance additionally seeks to curb publishing, printing and publicising any name address, photograph family details of the public servants. The curbs will remain in place unless the government has given its any nod for any investigations in the case.

Criticism drawn from all quarters

This move by the Vasundhara Raje government had drawn criticism from all corners. A BJP MLA Ghanshyam Tiwari also openly criticised the bill. Rajasthan Congress President, Sachin Pilot and several other party leaders were also detained for a brief period after they took out a protest march.

According to a report by the Bloomberg Quint, Ghanshyam Tiwari has been reported saying that, “This is a kaala kanoon and I am against it. It is undemocratic and unconstitutional. Eight High Courts and Supreme Court have decided that. The BJP’s representative members themselves went to give the memorandum to the Rashtrapati and the Parliamentary Secretary come with the limit of 15%”. Sachin Pilot, on the other hand, has said, “We will not let the government pass the bill. We are strongly opposing it”. In the 200 member Rajasthan Assembly, BJP has a whopping number of seats at 160 and Congress has strong-hold over 24 seats.

Wearing black strips of cloth on their mouth, Congress MLAs led by the Leader of Opposition, Rameshwar Dudi took out a protest from the MLA Quarters of the assembly buildings. Vasundhara Raje, the MLAs entered assembly premises and accused the BJP government of patronizing corruption. Sachin Pilot, however, told that the ordinance is being promulgated as the CM might be in trouble due to corruption.

The recent ordinance by the Vasundhara Raje-led Rajasthan government protecting judges and public servants directly impacts the free speech said, legal experts. According to a report by the Bloomberg Quint, Raje said that it was necessary to end the defamatory allegations against the state officials. According to Apar Gupta, an advocate from New Delhi said that such an ordinance has always been subject to immense public criticism as it encourages a system of “political patronage” in the cases of corruption.

A senior advocate of the apex court opined that such a move insulates power wielders from those who do not indulge in instances of corruption. This is a violation of the Article 14. The Article 14 states that everyone is equal in the eyes of the law. Dushyant Dave, another senior advocate in the apex court said, “This ordinance is ex-facie unconstitutional and it will be struck down by any competent court. This is the single biggest attempt to legalise corruption by the Rajasthan government.”

The Logical Indian community condemns the Rajasthan government’s move to bring about such a law. Such a law not only endorses corruption but also gags the media from publishing or even covering it in any case. This amendment attempts to stop the media from lodging any serious complaint against the corruption and also gives a sort of protection to the corrupt officials. This amendment can be easily called unconstitutional as well.

The Rajasthan ordinance is clearly a case of censorship against the press. By stopping information about corruption from being published by the media, it will be the common masses who shall remain uninformed. The threat of exposure through the press that helps in creating vigilance is no longer valid, in this context when such a bill has been brought to action by the Vasundhara Raje-led Rajasthan government.