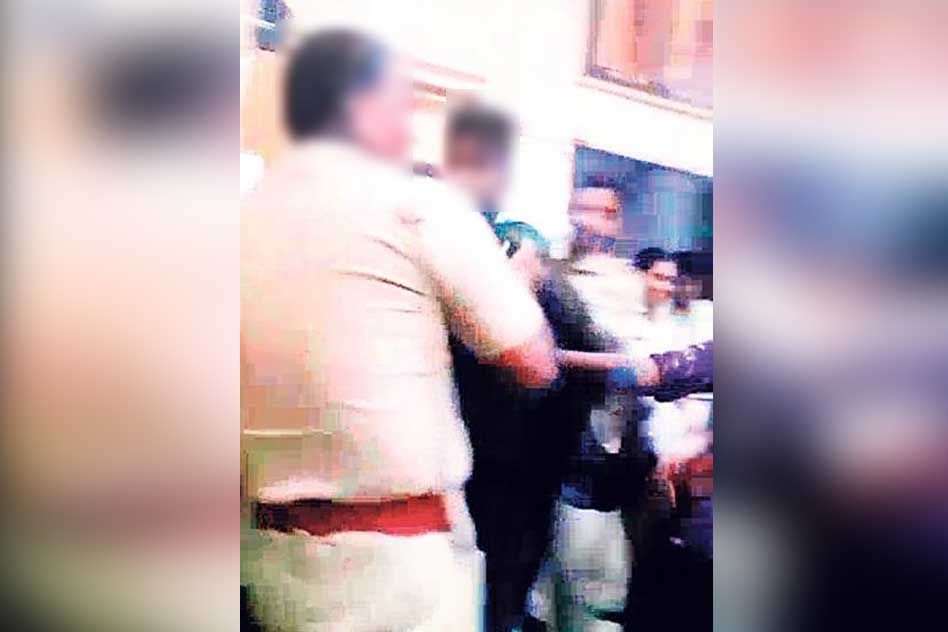 Tamil Nadu: Police Allegedly Beat Minors Inside Police Station To Force Them To Admit To A Crime

On Monday morning, eight minor boys were taken to a police station in Semmenchery in Tamil Nadu and had been beaten ruthlessly to admit their crime.

The police had picked the eight of them from their respective houses during the wee hours of 9th January and brought them to J10 Sholinganallur police station. An interrogation is being conducted over their alleged involvement in a burglary at a mobile phone shop.

The boys were lined up along a wall of the police station, and one of the officers started hitting their hands with a four-feet-long polypropylene pipe. The beating continued so that they admit their crime and provided information on another boy suspected in the case.

The police have claimed that they have CCTV footage evidence of the boys committing the crime. According to their reports, none of the items looted has been recovered.

Several women — mothers and grandmothers of some of the minors — sat outside the police station waiting for their wards to be released. However, the police tried to dislocate the crowd, showing no concern for the minors.

One of the minors had exams today but the police didn’t allow him to go and repeatedly beat him on his hands by the pipe. The grandmother of one of the accused had tried to protest when policed reached their house to arrest the child, but police pushed and tore her saree when she resisted.

The Logical Indian tried to contact the J10 police station in Sholinganallur, but nobody responded to our calls.

The incident was reported by Journalist Nityanand Jayaraman who posted about it on his timeline:

8 children from Semmenchery were picked up from their homes early this morning by police and taken to J10 police station. Children suspected of crimes are not supposed to be taken to the police station or enquired there. They were suspected of being involved in breaking in and robbing a cellphone shop. I reached the police station at 730 a.m. J10 Sholinganallur police station is a small station at Sholinganallur Junction. It is untidy. From the entrance, one can see the dark enquiry room. 4 boys were lined up against the southern wall, crying. I could only see three of them as one was behind the door. A few others were on the other side. Three policemen were inside, smiling, talking casually. One held a thick yellow polypropylene pipe — about 4 feet long. Every few minutes, he would flick it and rap the palm or the knuckles of one or the other kids standing there. This was visible even from the entrance. I was standing near the writer’s desk. One of them closed the door to the “enquiry room” and within minutes one tall bald man emerged along with the man with the pipe. They wanted to know who I was and why I was interested in this. I told them that one of the children in there is very well known to me. He said they have evidence that the kids were the robbers, and that the CCTV footage had captured the act. Why then beat the children, I asked? Because they are not admitting, and we still haven’t recovered the stolen goods. Moreover, one more “suspect” has not been caught. The one with the yellow pipe challenged me: “Will you catch the missing one for us? We’ll let these guys go.”

Outside, there were 10 women — mothers and grandmothers of the children. Not a single man. All broken families. Life in the state-sponsored ghetto of Semmenchery is hell, they said. One of the boys has his exams today. He studies well. Even if he is allowed to go, he may not be able to write the exams. He has been hit repeatedly on his hands by the one who wields the pipe.

As I was talking to the women, one policeman came out and shooed them as if he were chasing vermin “Aaay. thalli nillu. koottam podathe. Pah pah (Go, go. Stand away. Don’t crowd.) There was nowhere for the mothers to go. This is a crowded junction. Everybody is part of the crowd. One old woman, who had asked the policeman where her grandson was being taken, showed me her torn saree. The policeman had grabbed and pushed her. This happened inside her own house.

People who say squatters should be evicted, and that it is unreasonable for them to refuse alternative housing in Semmenchery, Perumbakkam or Kannagi Nagar have no idea what life is like in these hellholes. The police, the local school system, the bus drivers and conductors, kollywood — everyone view it as a den of vice, treat it as a den of vice, and end up making it a den of vice.

The government wants to move all of the city’s poor into these ghettoes. It is inhumane.

If you guys feel inclined to, please find out the telephone number for J10 Police Station or write to the Commissioner of Police or the Assistant Commissioner (Thuraipakkam) or Deputy Commissioner (Adyar).

The Logical Indian urges the Commissioner of Police to take necessary action to stop this unnecessary cruelty on the minors that is going inside the police station. If they are found guilty, then they should be treated by the Juvenile Justice Board instead of ill handling by the police. Also, we request the Commissioner of Police to carry out mass sensitization program for our police.