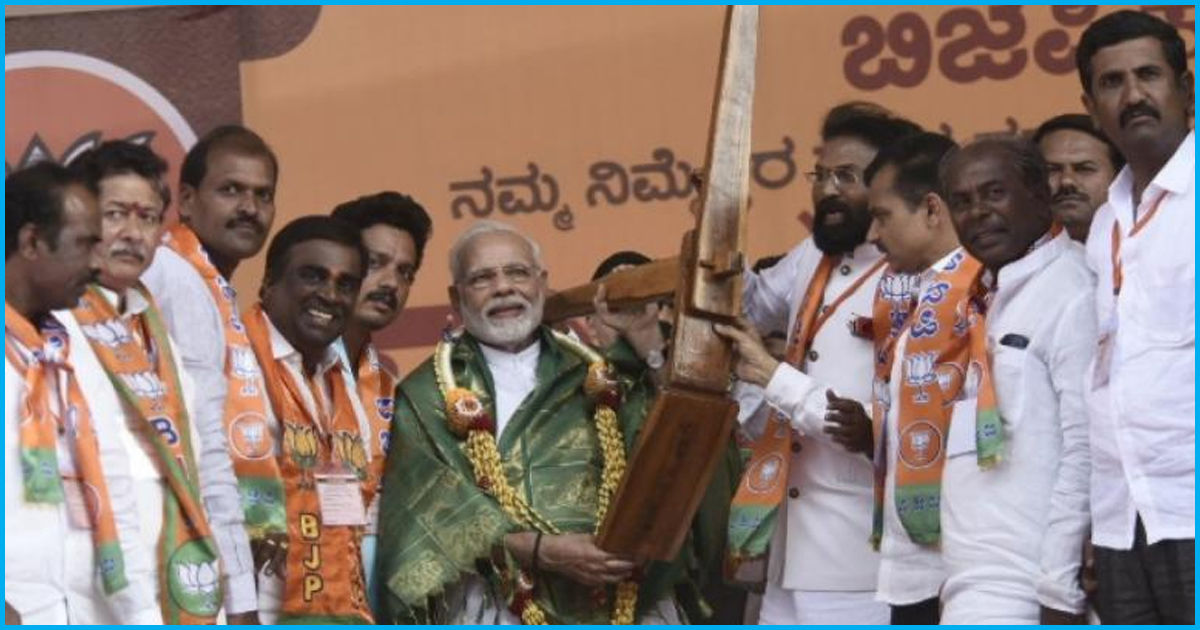 Even as the Supreme Court rejected mining bastion Gali Janardhan Reddy’s plea to allow him to campaign for his brother in Ballari on May 4, Prime Minister Narendra Modi was seen sharing the stage with the tainted Janardhan Reddy’s brother, Somasekhar Reddy, during his campaign for the upcoming Karnataka Elections on Thursday.

BJP has named Gali Somasekhar Reddy, the second brother Gali Karunakara Reddy, his friend Sriramulu and other 4 close to him as their candidates in 2018 Karnataka elections.

During his campaign in Ballari at the District Stadium, PM Modi kept mum on the choice of the candidates or the intense accusations made by Congress, instead, he spoke of how the Congress failed to deliver its promises, reported NDTV.

PM Modi said, “Sonia Gandhi had promised a 3000-crore package to Ballari, but forgot her promise. Despite all the natural resources, Ballari hasn’t been able to develop, because of the government in Bengaluru. This government hasn’t done anything.”

The Supreme Court rejected Gali Janardhana Reddy to visit Ballari and campaign for his brother Somasekhara Reddy, a BJP candidate in the constituency and also vote in the May 12 election.

A bench of justices AK Sikri and Ashok Bhushan while listening to the plea said, “We find no merit. The petition is dismissed.”

Supreme Court dismissed the plea of BJP leader G Janardhan Reddy for letting him go to Bellary to campaign for his brother, who is a candidate for the upcoming assembly elections in Karnataka. SC did not find any merit in the plea & dismissed it.

The bench also added, “There is no need for him to campaign in the elections.”

The bench also pointed out a January order when similar plea by him was rejected.

Janardhan Reddy was arrested in the illegal mining charges twice, once in 2011 and again in 2015. He was barred from Ballari as a condition for his release on bail in 2015.

However, he is camping near Molakalmuru in Chitradurga district overseeing the campaign of his siblings, Somasekhar and Karunakaran Reddy.

Who are the Reddy brothers?

Gali Janardhan Reddy, a former BJP Minister and the iron-ore giant, was involved in a Rs 35,000 crore illegal mining case in Karnataka.

“After careful consideration of the material placed before me, including the FIR, charge sheet filed by CBI and the submissions by the learned counsels, I am convinced prima facie that the defendants (Reddy and wife) had committed scheduled offences, generated proceeds of crime and ploughed them into properties provisionally attached,” the court of the Adjudicating Authority for PMLA and Chairman, K Raamamoorthy, said during one of the hearings.

Interestingly, they were accused of illegal mining in both Karnataka and Andhra Pradesh.

There are in total 63 accusations against Janardhan Reddy. Out of these cases, 10 cases pertain to Belekeri port. Mr Somashekar Reddy has also been in jail for trying to bribe a CBI judge for the bail of his brother.

During demonetisation, when most of the citizens were standing in queues outside ATMs and were facing a major cash crunch, Janardhan Reddy’s daughter got married. It was estimated that the wedding was a 500-crore affair. It took place in Palace grounds, Bangalore. The Vijayanagara empire was recreated. With chariots, foreign dancers, helipads, 1,500 hotel rooms, 2,000 cabs, 3,000 bouncers, the wedding hosted some 50,000 VIP guests. The wedding was attended by BS Yeddyurappa and another former Karnataka chief minister Jagdish Shettar.