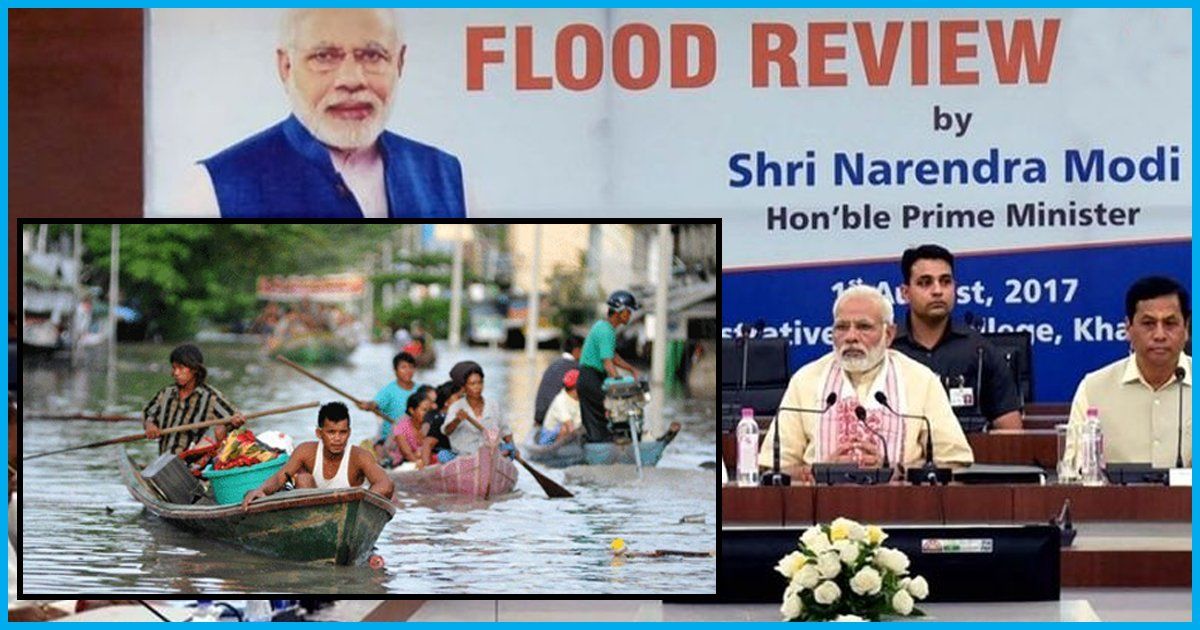 He also announced ex-gratia assistance of Rs 2 lakh to the next of kin of those who have died and Rs 50,000 each to those who are severely injured.

In an attempt to find a permanent solution to Assam’s flood problem, the PM announced Rs 100 crore to fund a study on the course of the Brahmaputra river and its tributaries, which cause bi-annual floods in the state every year, reported The Times of India.

Assam has witnessed one of the worst floods this monsoon, with the death toll increased to nearly 80 and lakhs of people affected.

However, it is not only north east Indian states facing the brunt of harsh monsoons but states like Rajasthan, Odisha, Jharkhand, West Bengal and Gujarat.

The death toll in Rajasthan floods has increased to at least 17. Several districts in the state, including Pali, Sirohi, Jalore, Jaisalmer, Barmer continue to be adversely affected. The flood water levels in remote villages of Jalore and Pali have reached around 5-8 feet the past four days, causing serious disruption to rescue operations.

The Indian Army has till now rescued 900 people from different parts of Rajasthan.

PM Modi has announced ex gratia of Rs 2 lakh each for the kin of those who have lost their lives in the floods.

At least 18 people have died in Odisha floods and 1600 people have been evacuated. Over 2 lakh people are affected by the floods and the administration is trying to rescue people on boats.

In Jharkhand, 3 people have died.

Twenty-one people have died in lightning strikes in both the states; most of the victims were working in fields and about 10 people were injured by widespread bolts, reported NDTV. Bihar has reported nearly 140 lightning deaths since May.

The flood in West Bengal rose to 46 on Tuesday with seven more people losing their lives in the last since Monday, even as the situation improved because the water level of rivers receded after a decline in the incessant rainfall.

Around 27 lakh people in 106 blocks of 14 districts of West Bengal were hit by the flood and around 311 relief camps have been opened for them, a senior official of the State Disaster Management department said, reported Firstpost.

Meanwhile, nearly 60,000 hectares of paddy seedbed has been damaged out of the 3,17,675 hectares of cultivated land.

The death toll in flood-hit Gujarat has increased to 218, including 61 deaths in worst-hit Banaskantha district.

Prime Minister Narendra Modi visited the state on 25 July and announced a relief package of Rs 500 crore for the flood-affected districts. Along with this, an ex-gratia of Rs 2 lakh to the next of kin of the deceased, and Rs 50,000 to those seriously injured in the floods have also been declared by the PM.

At least 700 people have died across the country in the floods which have affected as many as 20 states. Research in 2016 found about 113 million people in India – nearly 10% of the population – were acutely exposed to flood hazard.

The Logical Indian community hopes that the plight of the people soon improves and central and state governments are able to offer the required assistance to those severely affected.