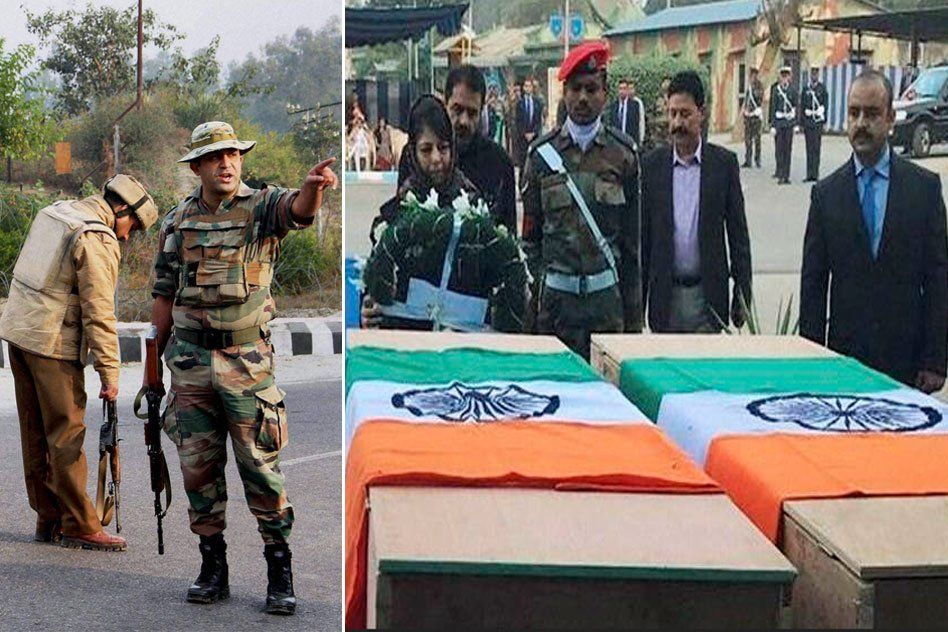 7 Soldiers Martyred In Nagrota Terror Attack, What We Know Till Now

Matter
Three terrorists in police uniform stormed into the premises of 166 Medium Regiment Unit on Tuesday in Nagrota, Jammu. They triggered fierce gun battles during early hours, threw grenades and fired indiscriminately at the entry on the main gate of the regiment facing the Jammu-Srinagar national highway. Major Gosavi Kunal Mannadir and Major Akshay Girish Kumar who led the Quick Response Teams (QRTs) were killed along with seven other jawans.

There was another gunfight 70 km away from Nagrota where three infiltrators were killed, and a senior BSF officer and five jawans were injured near Chamliyal area of Samba sector. The operation in Chamliyal was over quickly, but the gun battle at Nagrota continued for twelve hours.

The militants also entered two buildings housing the officers and families of the Army unit to take the families, hostage. The buildings were located three km away from the headquarters of the XVI Corps. The wives of the two army officers showed exemplary courage by blocking the entry of their quarters with all the household items which made it difficult for the terrorists to break in. Twelve soldiers, two women and two babies were successfully rescued, as reported by NDTV.

The militants also threw grenades in the officer’s mess and while countering them initially three soldiers and one officer of the Army were killed.

Militants
The bodies of three gunmen were recovered, and operations are in progress to sanitise the entire area. The army said that five to six heavily armed militants arrived at the camp base in a Maruti car and started a fire and lobbing grenades at the sentries at the main gate, as reported by The Hindustan Times.

Sources have said that the militants were from Pakistan which was indicative from the seizure of some Pakistan-made items like the packet of biscuits made in Pakistan, medicines and bandages, rope, scent bottles, wire cutter apart from arms, ammunition, and explosives, as reported by The Indian Express.

No civilians were targeted in this attack. Following this attack, the administration has shut all the schools in the cantonment located nearby National Highway 1A

As of this morning, combing operations are still going on on day three.

Major Gosavi Kunal Mannadir’s remains have been transferred to his hometown Pandharpur in Maharashtra as per ANI.

PTI reports that three AK-47 rifles, some magazines and grenades, were found along with a note, near one of the attack sites. The note was written in Urdu read “Afzal Guru shaheed ke inteqaam ki ek aur kisht” which meant that the attacks were to avenge the death of Afzal Guru.

The Indian Express also reported that there were CCTVs at the toll plaza about 4km from the artillery camp close to XVI Corps. They could have helped provide clues about the movements of the terrorists. Unfortunately they were switched off few weeks ago after they stopped collecting tolls post demonetisation announcement.