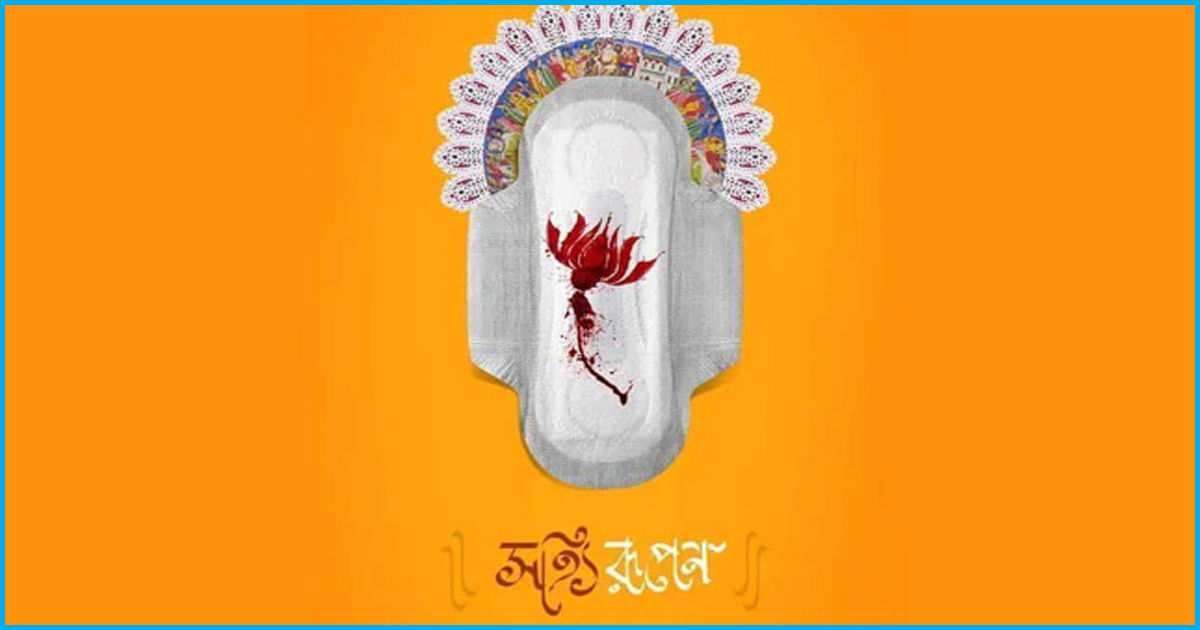 It is the time of the year again when Bengalis from all around the world go back home to celebrate the power and strength of a woman. It is not just homecoming for Bengalis, but also for Maa Durga, who comes back to her father’s house after claiming victory over Mahishashur. In West Bengal, people from all caste, creed and religion celebrate this occasion in their own way. Recently, an artwork of Goddess Durga by Mumbai-based Aniket Mitra, which although gathered a lot of admiration, also invited a lot of criticism for all the wrong reasons.

The post that he shared on Facebook garnered a lot of attention and it was shared almost 4,000 times within 24 hours. The post was later removed from his timeline. Mitra created an artwork of a sanitary pad with a bloodied lotus on it. He has also made a ‘Chalchitro’, which is a piece of decoration that bedecks Goddess Durga in the background. During the five days of festivities, menstruating women are not allowed to visit the pandals or even view the Goddess. To express his anguish over this conservative tradition, he chose art as a form of protest.

Already viral on social media, Mitra, who is a visual artist, has been receiving threats ever since its release.

For those who are upset over the fact that their period cycle is going to ruin Durga Pujo this year, a sincere advice to…

“I have watched first my sisters and now my wife struggle with taboos regarding their periods. I have seen them be asked to not come to certain places because they are menstruating. As someone living in 2018, this infuriates me,” Mitra told News18.

People have taken offence to an extreme level. Without understanding the underlying meaning behind the wonderful piece of art, people have been commenting things like “If this was south India, people would have already chopped off his hands. We Bengalis are extremely tolerant but this is an insult to our Maa Durga and we won’t tolerate it.” There are people who even termed him ‘Anti-Hindu’.

Undeterred by the criticism, he told NDTV, “I am not really concerned of what people are saying. I am happy with the support that I am getting.” Many people have also come out in support of his work. People have shared the artwork in their timelines, urging people to do away with the age-old tradition.

The first thing a Bengali does when they get a new calendar is to mark the dates for Durga Puja. The year-long wait should not be restricted because of a natural occurrence like menstruation. It is ironical that during the celebration of womanhood, it is the women who are missing out.

Menstruation is a taboo in many parts of India, wherein women who are menstruating are not allowed to participate in pujas and other religious events. After a long battle, the gates of Sabarimala temple in Kerala have been opened by the Supreme Court for women, between the age of 10 and 50, who were previously not allowed inside because they were in the ‘menstruating’ age. Depriving a woman of the pleasures of celebrating Goddess Durga’s victory over the patriarchal structure of the society is wrong and it is high time we change such an outlook.

The Logical Indian appreciates Aniket for starting a conversation on menstrual taboos and we hope that things change better in the future.