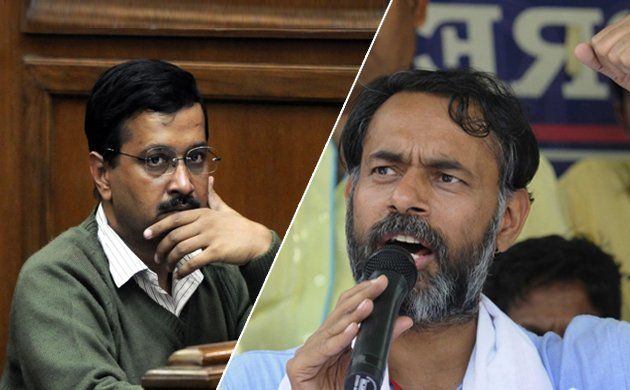 Aam Aadmi Party (AAP) and controversies walk hand in hand and the fact is proved time and again. Yogendra Yadav, an expelled member of AAP and the founding member of Swaraj Abhiyan, a split of AAP, challenged the Chief Minister of Delhi to explain the issuance of 399 liquor licenses since the party came to power.

Yogendra Yadav has accused the AAP of encapsulating the data regarding the number of liquor license issued by the government and notwithstanding with the promise made in the manifesto of making Delhi “NashaMukt” (de-addicted). In an effort to put AAP in hot water, Yogendra Yadav also demanded a public apology owing to the data inconsistency and missing transparency.

6 or 399?
My challenge to @ArvindKejriwal on truth of liquor licenses issued by AAP govt. https://t.co/id9OS5FXdT

Here is the list of 399 licences issued by AAP govt in Delhi.
I challenge @ArvindKejriwal to prove this is not true.https://t.co/Qs9dKEw7wk

In a reply to accusations, Manish Sisodia answered that the government has issued only six licenses to any establishments so far.

“Your government has repeatedly claimed that AAP government has issued only six new licences for liquor after coming to power. When Swaraj Abhiyan released different RTIs (right to information requests) showing figures ranging from 58 to 217 new licences, your deputy chief minister claimed this was a lie. You might recall, Prashantji (Prashant Bhushan, also a Swaraj Abhiyan leader) and I are not given to lying,” Yadav said in his letter to Kejriwal.

As the Delhi Excise Law states , the issue of any liquor license which allows opening up of any liquor shop in a particular locality requires a prior consent of the local residents. Swaraj Abhiyan has been holding public meetings concerning the irregularities in issuance of liquor license thereby revealing the ways by which the government is misleading the people of Delhi.

After all the bold allegations, the CM of the National Capital acted in his own modus operandi and assured that the people will now be included into the judging whether to issue a license or not and this will happen via mohalla sabhas. And this step comes after earlier this month he announced that now new liquor shops will be opening up this year .

The Logical Indian expects that the leaders whom we choose to govern us will maintain required factual transparency and will function according to the law. Hence, consent of the local public will be considered in issuing any liquor license and asks AAP to come out clean with the facts.