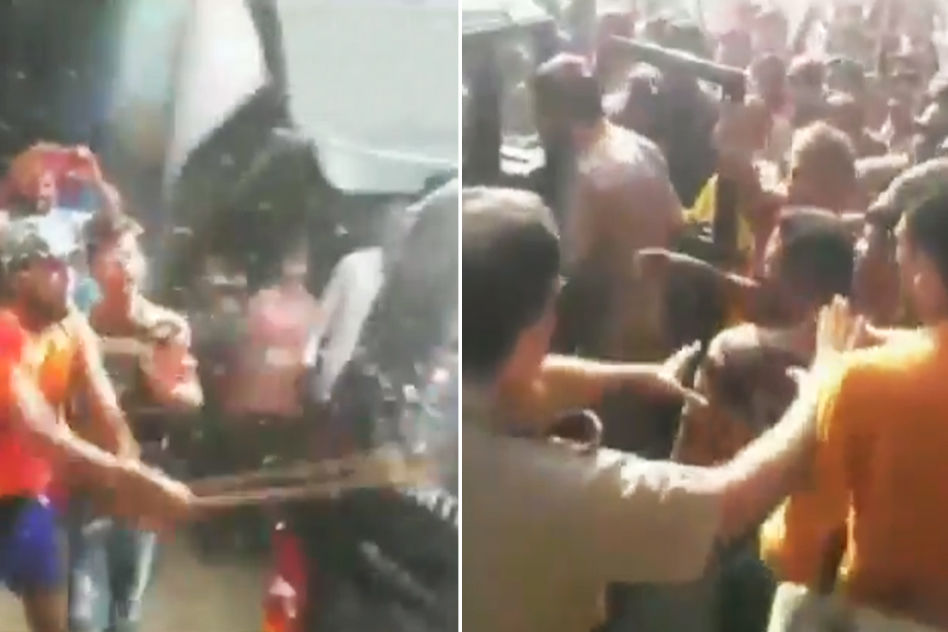 On Tuesday, August 7, a few Kanwariyas vandalised a car that allegedly brushed passed them in Delhi. Just hours later, a group of kanwariyas were caught on camera attacking a police vehicle after an alleged scuffle with locals in Bulandshahr, Uttar Pradesh. Meanwhile, the residents from different parts of Delhi-NCR has claimed that the kanwariyas are creating menace on the streets.

As soon as the Kanwariyas took to the roads for their annual yatras, there have been reports of violence caused by them. The video has surfaced on the internet, in which 50-60 kanwariyas are seen attacking the police vehicle, smashing the windows. In the video, a police officer can be seen trying to tame the crowd. Towards the end of the video, the police vehicle pulls out of the crowd.

According to the Indian Express, “There is a person named Pappu who was living in the locality at his maternal uncle’s house. On Wednesday, around 8 am, there was a clash between him and another group regarding an old personal enmity. In the clash, he called his Kanwariya friends to take his side. As soon as a police team reached the spot, they all attacked the police van,” said station officer (SO) at the Bugrasi Narsena police station, Anil Kumar.

#WATCH: Kanwariyas vandalize police vehicle after an altercation with locals in Bulandshahr on 7th August, police have registered a case. pic.twitter.com/UaIcNU55RV

The Kanwarias have taken over Gurgaon. On NH8 they're drunk, stripping down, waving sticks at passing cars, whistling at solo women drivers. Making a mess of the roads. Skeletal @gurgaonpolice who aren't able to do much. pic.twitter.com/AXQgaXpDGr

On the same day, another video of Kanwariyas vandalising a car in Moti Nagar, Delhi and bringing traffic to a halt was circulated on social media. According to reports, the Kanwariyas ransacked the car after the car allegedly brushed passed one of them. An FIR has been registered against “unknown person”.

“Red card” for the villagers

From another district of the same state, the police have issued “red cards” to some people who they suspect might cause trouble in the kanwariya yatra. These “red card” are given by the police in the last one week to more than 250 resident of Khelum village, Bareilly district of UP. To top it all, the district administration has also identified 441 locals who “may cause trouble” and have had them sign “symbolic” bonds of Rs 5 lakh if they disturb the peace.

“We have secret information that during the Kanwar yatra you might create trouble…with this red card we are informing you that if you create any trouble during the Kanwar yatra, action will be taken against you. You will be held accountable,” said the local police. This step towards the safety of Kanwar yatris has brought panic in the village and prompted 70 Muslim families to leave the area, for the time being, reports The Indian Express.

Last year, during the yatra, clashes erupted between Muslims and Kanwariyas who passed through a Muslim-dominated neighbourhood in Khelum village and left dozens from both communities and 15 security personnel injured. Two FIRs were registered — one naming 29 Muslims and another naming 14 Hindus.

However, Bareilly SSP Muniraj G said that these red cards are not legally valid. He added that these cards are being given to most of the people from both the communities to let them know that they are under police surveillance.

Uttarakhand’s principal secretary wrote a letter to home secretaries in Delhi, Haryana, Uttar Pradesh and Himachal Pradesh asking them to check all the yatris passing from their state. They are asked to check their vehicles and remove all kind of tridents, sticks, baseball bats from their possession. The letter was written by Anand Vardhan, Uttarakhand principal secretary on July 9 which said “Most of the time, kanwariyas carry tridents, baseball bats, hockey sticks and they don’t hesitate to use these weapons whenever they have an argument or fight with anyone. They also fight with shopkeepers and local public, which becomes a major law and order issue.”

He also warned them that some of them consume roadside drugs and while going back from their yatras, they get intoxicated and drive their vehicles rashly which might lead to an accident. He also told them that they play very loud music in their vehicles and try to race with other vehicles in an inebriated state.

Kejriwal to attend the yatra

Amidst all the action going around the kanwariya yatra, Delhi CM Arvind Kejriwal, on Thursday will join Kanwar Yatra in Rohtak. The CM will join “Bhaichara Kanwar Yatra” in Rohtak, which was launched by AAP’s Haryana unit recently.