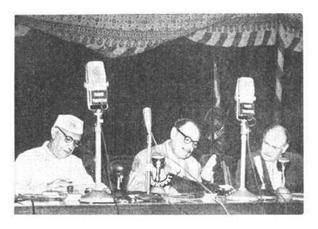 The Indus Water Treaty Between India And Pakistan
Pressure is mounting on Prime Minister Narendra Modi to take some stern action against Pakistan post the cross-border Uri attack on September 18 that claimed the lives of 19 Indian soldiers. There’s a clamour all over the media that one of the options PM Modi can consider is to either scrap or alter the provisions of the Indus Water Treaty. On Thursday, India raised the issue in a meeting stating that a treaty could not be a “one-sided affair”.

However, PM Modi met top officials on Monday including the National Security Adviser Ajit Doval and Foreign Secretary S Jaishankar to assess the 1960 treaty with Pakistan. Sources said the government has decided on the maximum use of three of the rivers that are governed by Pakistan under the treaty – Indus, Chenab and Jhelum. Officials ruled out repealing of the Indus Water Treaty or go back on India’s international commitments.

What is the Indus Water Treaty?
The Indus Water Treaty is a water-sharing agreement signed by the then India Prime Minister Jawaharlal Nehru and Pakistan’s President Ayub Khan on September 19, 1960, in Karachi. The treaty deals with the water distribution between the two countries over the sharing rights of six rivers — Beas, Ravi, Sutlej, Indus, Chenab and Jhelum. The agreement was brokered by the World Bank. Why was it signed?
One of the main reasons the agreement was signed because India is the source of all the rivers of the Indus basin, although Indus and Sutlej originate in China. The rivers enabled India to use them for irrigation, transport and power generation. Pakistan also needed the water and feared that India could eventually create a drought situation in Pakistan in case a war breaks out between the two countries. A Permanent Indus Commission set up in this connection has gone through three wars between the two nations without disruption. This so far has been one of the most successful water-sharing pacts of the world.

What is the agreement?
Under the treaty, the waters of the three eastern rivers — Beas, Ravi and Sutlej — were granted to be used by India without restriction, while 80% of the three western rivers — Indus, Chenab and Jhelum were allocated to Pakistan.

According to the treaty, India can construct storage facilities on “western rivers” of up to 3.6 million acre-feet, which it has not done so far. India is also allowed agriculture use of 7 lakh acres above the irrigated cropped area as on April 1, 1960. So far, both the countries have received fair shares of water.

Can India repeal or abrogate the agreement?
The Treaty of Indus remained intact even after three wars between India and Pakistan in 1962, 1971 and 1999. In times of every major conflict, India had threatened to cut off the river waters and nothing happened as such. So the chance of repealing the agreement is improbable. India can create a drought situation in Pakistan, but the country does not have enough storage capacity. Besides, repealing the agreement would set a bad precedent and draw major flak from countries like Bangladesh and Nepal with whom India shares other water agreements. If anything like this happens, Pakistan will take the matter to UN’s International Court of Justice where India will likely lose the case.

Other reasons being Pakistan’s ally China controlling the flow of Brahmaputra that flows to Assam and larger parts of the North-eastern states of India might make the situation difficult for India by not sharing the water.

Also, repealing the treaty will give a new dimension to the Kashmir issue and further sensitise situation.