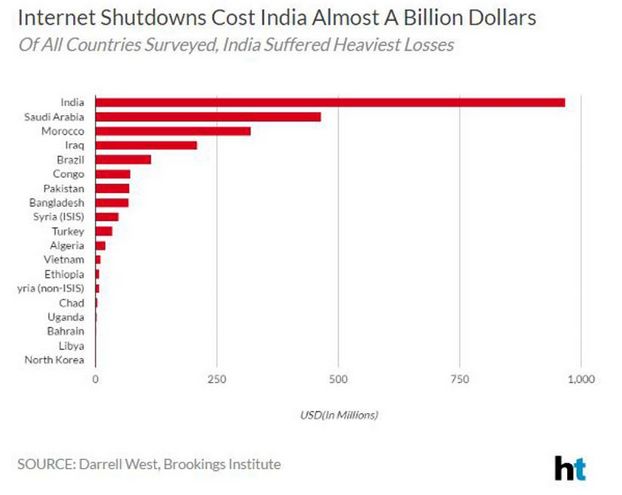 India’s Economy Suffered $1 Billion Loss From Internet Shutdown, More Than Any Other Country

As per the Hindustan Times, in a recent study released by Brookings Institution, it was unveiled that India has lost almost a billion dollars from internet shutdowns over the past year as compared to another country. India was rated to be at first place amongst 19 countries that were examined in the study. These countries cut off the access to the web on purpose. India has the worst impact on the economy even when countries like Morocco and Syria which is controlled by ISIS have cut off the internet access for more days than India.

Darrell M.West who conducted the study calculated the economic impact of internet shutdown. He assessed the country’s Gross Domestic Product and the size of its digital economy and duration of internet shutdowns. It was also found that internet shutdown in India has been more rampant since 2014 due to increased popularity of mobile applications like Whatsapp and Viber. Dr S. Amar Prasad Reddy, Additional Director General at National Cyber Safety and Security Standards said,”it’s easy to spread misinformation with WhatsApp, and since there is no nodal officer in the company, it becomes difficult to trace criminals.” The internet is mostly shutdown to avoid a violent situation such as unrest in Jammu and Kashmir, following the death of militant Burhan Wani. The authorities suspended mobile internet services in Kashmir valley to check spreading of rumours by anti-social elements. Jammu and Kashmir have witnessed major internet shutdowns in the past three years than any other state. State authorities of Haryana also blocked mobile internet in certain districts after the protest by Jat community for reservations turned violent.

The Internet services were cut off for a little more than a week in Gujarat in September after the protest by the Patel community to demand reservations. Godhra also witnessed the shutdown in internet services after the derogatory messages were circulated against Islam.
The internet was also shut down in February by the Gujarat State Subsidiary Selection board which were worried about cheating during the Revenue Accountant Recruitment Exam. Prashanth Sugathan of Software Freedom Law Centre India said to Hindustan Times,” It is important for a citizen to exercise his fundamental right to freedom of expression and it is not justified to curtail the right for reasons like preventing cheating in examinations.” Dr Reddy said that the enforcement agency should update their skills in dealing with cyber crimes.