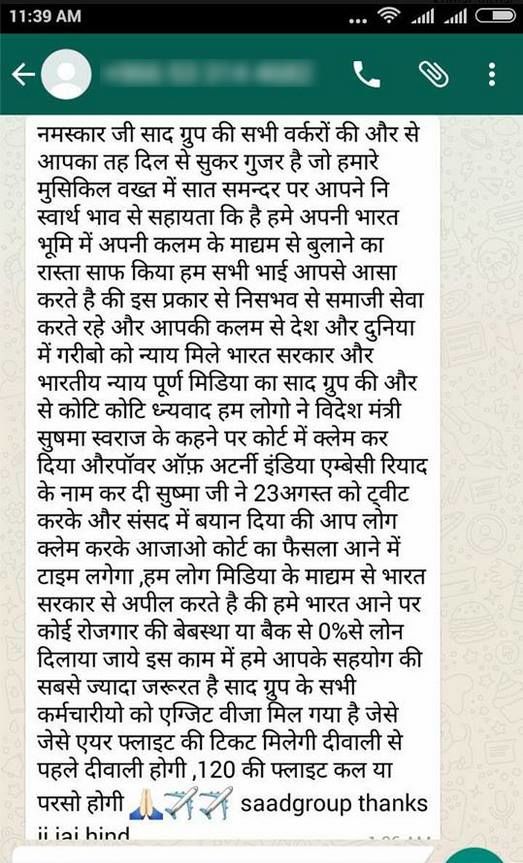 Over 1000 Indian Workers From Saudia Arabia's Saad Group To Return Home, Thanks To MEA

Over thousands of despaired workers from India, who had been working for Saudi Arabia’s Saad Group, have started coming back to India beginning on Thursday. The Minister of External Affairs Sushma Swaraj said that Minister of State in the MEA, VK Singh, has gone to Saudi Arabia to oversee the return of Indian workers.

My colleague @Gen_VKSingh is in Saudi Arabia to accomplish this task. /2

On October 12, The Logical Indian had published a report and also sought the government’s help on how over 1,000 Indian workers were stuck in Saudi Arabia’s Oil company, Saad Group Saudi, Arab Al Khobar, from November last year without getting paid a single penny. For the last three months, the company had stopped paying money even for their meals. On 17 May, the workers filed a complaint at the Indian Embassy in Riyadh with Help Id SB2RPT100836416. On 27 June, their family members also went to meet External Affairs Minister Sushma Swaraj at her office to share their problems. She said that action would be taken after Eid holidays will be over. The employees had appealed to the labour court for their salaries, but the case is still pending.

Embassy personnel had also told the workers that those who wanted emergency exit, must make a list of their names and could leave the place after giving the power of attorney to the embassy. It is because of claiming this power of attorney, the workers are being able to return home. However, it will take more time to settle the salary dues from the court in Riyadh. One of the workers told The Logical Indian, “Every employee of the Saad group has now received their exit visas. They are coming to India one by one after receiving their flight tickets. We hope will be able to celebrate Diwali with our family members before the actual day of Diwali.”

A message sent by one of the Saad group workers to The Logical Indian: We thank the Ministry of External Affairs for expediting the process of bringing Indian workers back home from such grievous situation. The workers have been suffering for the past few years without proper food or salary. Their families back in India have been barely managing to make their both ends meet. Their children have been suspended from schools.

We would like to appeal to the Government of India to provide assistance to these workers who come back to India so that they can improve their situation at home and help their families.