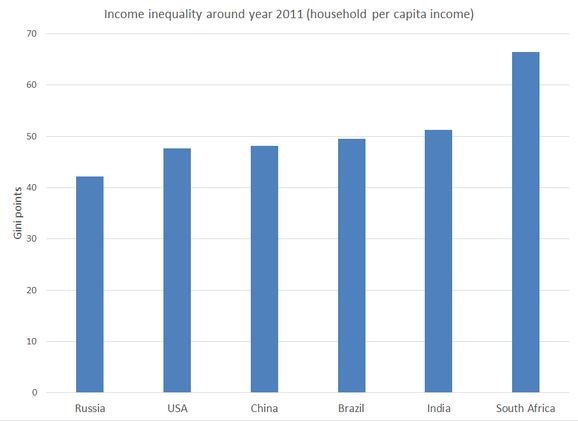 India Is The Second-Most Unequal Country Across The World: Report By New World Health

As we discuss some of the major concerns in India right now are its poor healthcare facilities, hindrance of freedom to expression, population, poverty has always gripped the country. It is now one of the most unequal countries in the world, where inequality is measured on the basis of income or wealth. Based on the new India Human Development Survey (IHDS), which provides data on income inequality for the first time, India scores a level of income equality lower than Russia, the United States, China and Brazil, and more egalitarian than only South Africa.

The Johannesburg-based company New World Health has reported that India is the second-most-unequal country globally. Millionaires control 54% of the country’s wealth. With a total individual wealth of $5,600 billion, it’s among the ten richest countries in the world – and yet the average Indian is relatively poor. Japan has been deemed as the most equal country in the world where millionaires control 22% of the wealth. According to the latest data from Credit Suisse, 1% own 53% of the country’s wealth in India. The richest 5% own 68.6%, while the top 10% have 76.3%. At the other end of the pyramid, the poorer half has a mere 4.1% of national wealth. A matter of concern for India
In India, Oxfam, an international confederation of charitable organisations focused on the alleviation of global poverty, believe that the rising inequality will be a challenging task for India to alleviate poverty. It will further undermine the sustainability of economic growth, compound the inequalities between men and women, and drive inequalities in health, education and life chances. Oxfam also shared its opinion on how India can reduce inequality. They believe that the government of India needs to implement reforms that redistribute money and power and level the playing field.

Taxation should play the key role in curbing the inequality where corporations and the richest individuals pay more to the state in order to redistribute resources across society. The government should think of reshuffling policies on taxation.

Public spending in services like education, health and social protection, is also important. According to a forthcoming Oxfam report (to be published in 2017), India performs relatively poorly on both counts. To know more, click here.