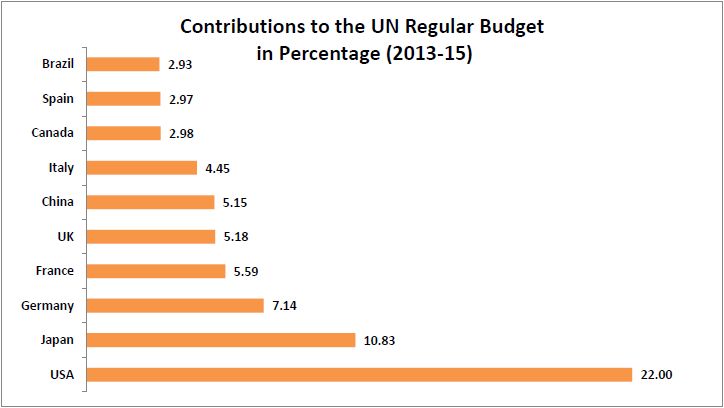 How Much Do Various Countries Contribute To The United Nations Budget?

The United Nations (UN) is an international organization founded in 1945. The mission and work of the United Nations are guided by the purposes and principles contained in its founding Charter.

What is the basis for deciding the quantum of contribution of each member?

Each member state of the UN is obligated to contribute to the UN. The contribution is calculated on the basis of scale of assessments. The Committee on Contributions is entrusted with the job of deciding the quantum of contribution.

To determine the scale of assessments, the Committee on Contributions uses estimates of each member state’s gross national product (GNP) and a number of adjustments, including data for external debt and for low per capita incomes. The assessment thus takes into account the country’s share of the global Gross National product with discounts given for low per-capita income and the country’s external debt. This is with respect to the regular budget of the UN. Similar assessments are done for other organizations of the UN including the peacekeeping operations. For deciding contribution to the peace keeping operations, adjustments are made for average per capita GNP compared to global average GNP.

The General Assembly has directed that percentage shares range from a minimum of 0.001% to a maximum of 22%, and a maximum of 0.01% for those nations designated as “least developed countries.”

Who contributes the most to the regular UN budget?

USA’s GNP is approximately 27% of the total GNP of all the member countries of the UN and thus, its highest share of contribution is justified. How much does India Contribute?