Hima Das Donates 50% Of Her One Month Salary For Assam Flood Relief, Appeals For Help 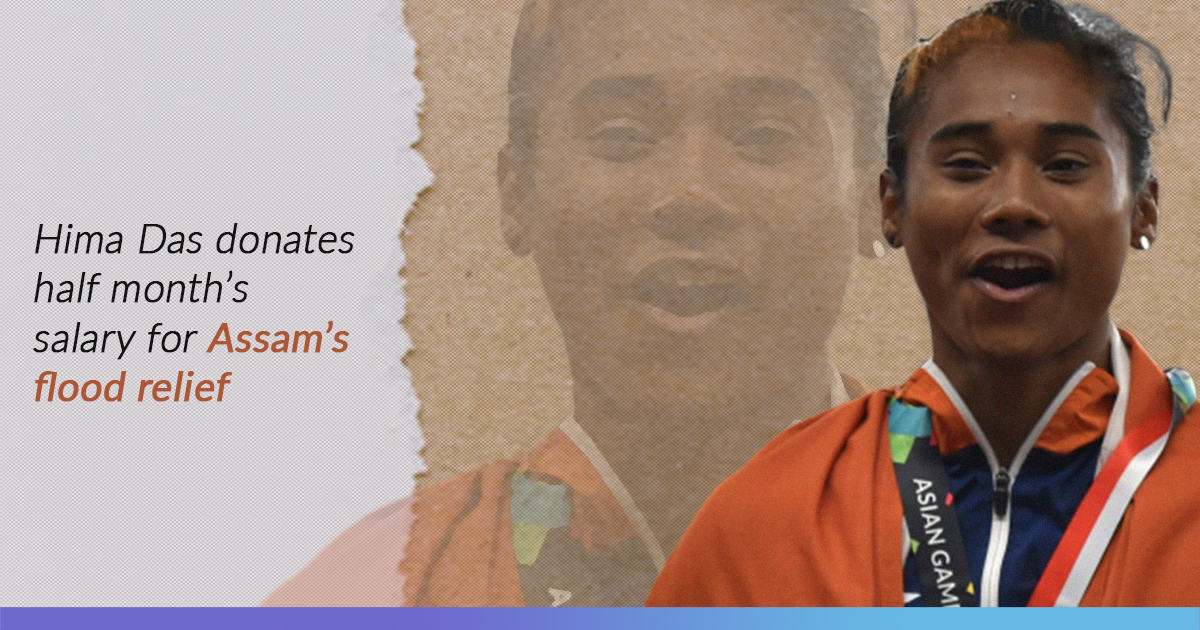 Indian star sprinter – Hima Das who won three golds in the last two weeks on international platforms has donated 50% percent of her salary for the Assam Flood victims.

Flood situation in our state Assam is very critical, 30 out of 33 districts are currently affected. So i would like to request big corporates and individuals to kindly come forward and help our state in this difficult situation. pic.twitter.com/cbVZv7b4IP

One can donate to Chief Minister Relief Fund by clicking the below link https://cm.assam.gov.in/relieffund.php. You can also organize collection camps, reach out and write to GOONJ, an NGO working on the ground, at [email protected] For more details on how you can help, visit here: https://goonj.org/assam-bihar-floods/

The torrential downpour has increased the water level of multiple rivers to a dangerous level in Assam breaching the embankments of several rivers. The rising water level has submerged around 4,600 villages underwater. The floods have already affected around 52 lakh people in the state. Near around 1.5 lakh people have been shifted to relief centres amid a red alert issued by the state government. 30 of the 33 districts in the state have been affected due to floodwaters. Three of the worst-hit districts are Barpeta, South Salmara, and Dhubri.

Nearly 15 National Disaster Response Force (NDRF) team comprising around 380 personnel along with Indian Army are overseeing the rescue operation in the state. Indian Air Force choppers have been kept on standby to airdrop relief materials.

The devastating flood has also affected around 10 lakh animals in the state. The Kaziranga National Park which is the world’s largest abode to one-horned rhinoceroses was 95% underwater till July 16. Most of the animals were hauled to highlands.

Despite 30 animal deaths reported, the forest officials confirmed that the floodwaters have been receding from the wildlife reserve giving some respite to the wildlife.

As of now, the central government has earmarked Rs 251 crore as the first instalment for the State Disaster Response Fund to Assam. The state government has released Rs 75.95 crore for the affected areas. Assam Chief Minister Sarbananda Sonowal said that the state government has pressed flood control mechanisms, including control rooms into service with government officials monitoring them round the clocks.

Also Read: Protected: From Training At Rice Fields To Being The First Indian To Win Gold On The Track – Hima Das’s Inspiring Journey